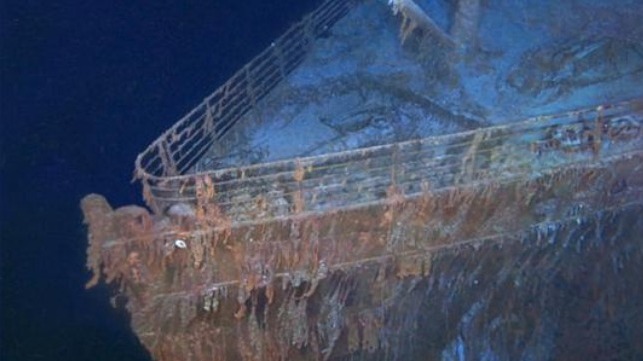 RMS Titanic Inc., the salvage and exhibition company that describes itself as “the exclusive steward of RMS Titanic,” plans to conduct another expedition to recover materials from the wreck site – and, for the first time ever, to take an artifact from within the ship.

RMS Titanic Inc. has the admiralty rights for salvage at the site, and it has retrieved about 5,500 items since its first (controversial) dives in 1987. Its last expedition to the site was in 2010, when it completed a 3D video survey of the vessel.

In a federal court filing this week, the company requested the right to recover the Titanic's Marconi wireless set, which is lodged within compartments on the topmost deck. A recent visit found that the vessel is deteriorating more rapidly than expected due to a combination of currents, iron-eating bacteria and saltwater corrosion, and RMS Titanic Inc. expressed concern that the vessel's radio room could soon be destroyed in the course of the ship's deterioration – “potentially burying forever the remains of the world’s most famous radio.”

At the time of the Titanic's sinking in 1912, the Marconi wireless was a relatively new technology for shipping, and the vessel's SOS signal has become a part of the ship's place in popular culture. The Titanic's senior wireless operator, Jack Phillips, stayed at his post and continued to transmit a distress signal (alternating SOS with the old “CQD” code) until the vessel lost electrical power. He did not survive the sinking, but his efforts brought the assistance of good samaritan vessels like the Carpathia, which saved about 700 passengers and crew. Without the wireless transmission, it is considered unlikely that a rescue effort would have been mounted in time.

RMS Titanic Inc.'s request to recover the radio comes at about the same time as the entry into force of a new treaty to protect the Titanic. The U.S. and the UK have both ratified an agreement that gives the nations the right to regulate tourism and salvage operations at the wreck site. Before, the Titanic was subject only to admiralty law and to the protections afforded it as a UNESCO heritage site.

The request also comes at about the same time as the dissolution of RMS Titanic Inc.'s parent company, Premier Exhibitions. Premier was once a publicly-listed museum display company with a variety of touring exhibitions, including displays focused on artifacts from the Titanic. It pursued the monetization of its Titanic holdings through auction or sale beginning in 2012, but the relics were still in Premier's possession when it filed for bankruptcy in 2016. In 2018, a federal judge approved the sale of the 5,500 Titanic artifacts from Premier to three investment companies – Apollo, Alta Fundamental Advisers and PacBridge Capital Partners – in order to satisfy Premier's debts. Last October, Premier began the final process of liquidation, which will ultimately result in the dissolution of the company.