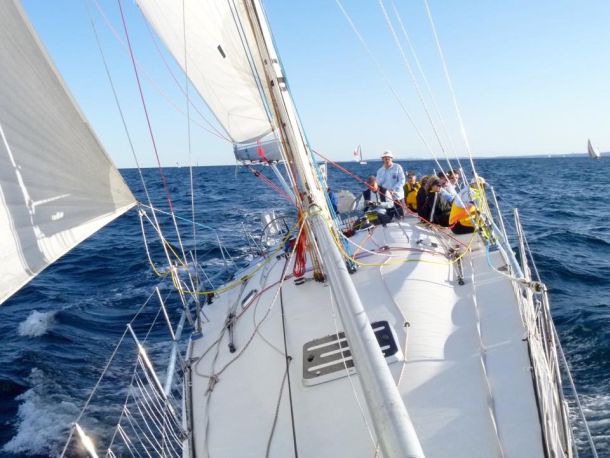 Sailors With Disabilities in the Gold Coast Race. Photo SWD.

Sailors with disABILITIES participated and completed the 2015 LandRover Sydney to Gold Coast Yacht Race with a crew of fifteen on
board Kayle, a 52ft Lyons grand prix offshore racing yacht purpose-built for disabled people.

According to the CYCA, “The 384 nautical mile race has attracted fleets of between 70 and 80 yachts each year, with entries coming mainly from New South Wales and Queensland, but also from Victoria, Tasmania, South Australia and New Zealand. In 1997, a record fleet of 86 boats took part.”

After arriving in Southport, Mark Thomson, long-term crew volunteer and veteran of several Sydney to Hobarts said, “Our race result is a fair reflection of how we raced, but not of what we achieved. We have one crew member with Friedreich's Ataxia, a rare inherited disease that causes nervous system damage and movement problems, two crew who are amputees, one person with vision impairment, one who was was in a wheelchair, one with MS, and John Whitfeld as a first-time ocean racing skipper with SWD.”

When asked about the crew's achievements, SWD Founder David Pescud, who did not join in the race for the first time in many years, reflected on the success of the crew: “What a great way to start the 2015 sailing season off: with a brand new skipper, John Whitfeld, a new crew and a great, great success story – getting everybody to Southport safely.

“How proud we all are here in Sydney of our new team. They're getting ready for Sydney to Hobart and this was the first part of their training program. They're all there in the warmth, now, and we're here in the cold and they're feeling pretty proud of themselves, and so they should be. It's a pretty tough 384 mile race and sailed in trying conditions. We're very pleased with the outcome and looking forward to a great result in the Hobart race this year.”

For many in the crew, this was their first ocean yacht race. After the race, Mark Ralph, a volunteer crew member who has sailed both Sydney to Hobart and Sydney to Gold Coast, sent us a text saying: “The weather Gods were extremely kind to us. It was great to share the experience with, I think, seven crew who were doing their first ocean race.”

The CYCA introduced the Land Rover Sydney Gold Coast Yacht Race in 1986 as 'the great winter escape', taking advantage of the completion of the Gold Coast Seaway. The race has become a mainstay of the ocean yacht racing calendar in Australia and a litmus test for the Sydney to Hobart racing crews.

Kristi Foster, who has been sailing with SWD for a number of years, said, “The race was a great learning experience for everyone. Some of the team had never been out overnight. I enjoyed the challenge of the race on my body.”

Kristi broke her back when she was twenty-one years old. Sixteen weeks after surgery to repair her spine she was in a car accident and broke her back again, and her neck. She's also been diagnosed with MS of the spine. To be a volunteer crew member with SWD, traveling 10 hours in each direction each weekend from Coffs Harbour to Sydney to train with the crew, and then to participate in this race is an awe-inspiring achievement.

Harry Atkinson, a twenty-four year old who was given the honour of steering Kayle over the finish line, had this to say about his experience: “The most inspiring and highlight of my Sydney to Gold Coast experience was seeing the look on Paul's wife and his son's faces when they saw him come out of the airport. It was more than an offshore yacht race. It was more than trying to go as quickly as we can. It's about creating change, making people believe that they can do whatever they want to do and inspire able and disabled people to never say I can't.”

SWD thanks the SWD on-board crew and photographers, Harry and Kristi, who took the images which helped SWD win Day 1 of the Landrover Sydney to Gold Coast Yacht Race photography competition and show our community around the world what it's like to be on board during an ocean yacht race. The crew did a great job working together not only to sail a 384 nautical mile race, but to raise the profile of SWD's work and programs and inspire others to give it a go.