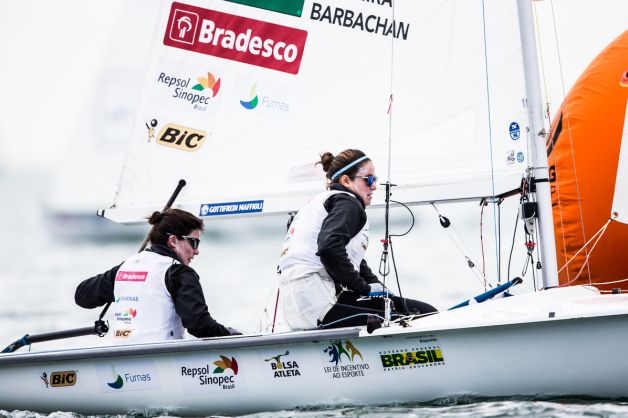 The first big hit out of Olympic and Paralympic sailing in 2016, Sailing World Cup Miami presented by Sunbrella, opened up with the 711 sailors being tried and tested in a light Miami breeze.

It was a 'head out the boat' kind of day with sailors looking to play the shifts and read the current to advance in large packs of racers. The morning opened with 4-6 knots from the north that slowly swung to the east, coming in at 7 knots and peaking at 10.

Only the Laser fleet completed the scheduled number of races in what was a challenging day for sailors and officials alike. Four days of fleet racing remain ensuring adequate time to catch up on races lost ahead of Saturday's live Medal Races that will be available to view on YouTube worldwide and on ESPN3 in the USA.

Dutch sailor Rutger van Schaardenburg knows the importance of not risking too much during the first few races of the regatta. But he's not afraid of opportunity. So when the opening's presented themselves during the first two races in the Yellow group of the Laser division, he pounced. The reward: a pair of first-place finishes.

“It's obviously an ideal start,” said the lanky Dutchman. “For me it was important not to have very bad races because tricky wind conditions today—light wind [that] could come from any direction—so I didn't want to start with a bad result and that worked out.”

The first race was a wire-to-wire win, by nearly two minutes over the second place boat. The second required some work, and van Schaardenburg isn't afraid to say, a little help from above after struggling off the line. The comeback could be broken into two distinct components. Halfway up the first beat, a favourable shift helped him to get back in touch with the lead group. Then he was able to move from 10th to first on the run.

“Downwind [it was] both being in the pressure and having the opportunity to go quick not having anyone on the back blocking the wind from me,” said van Schaardenburg. “Freedom, pressure and obviously the boatspeed was good.”

Milivoj Dukic of Montenegro also had a strong day with a third and a second, as did van Schaardenburg's countryman, Nicholas Heiner, who stands third with nine points.

Both Australians had one good race and one that will become a drop. Matthew Wearn sits in 19th overall with a scoreline of 2,23 while Tom Burton had 34,4 to be 34th.

With their start pushed back due to the mid-day lull in the breeze, the first of two fleets of Laser Radials didn't get started until after 15:00 local time, and the second didn't cross the line until after 16:00. In both groups a familiar face lead the way around the track. Anne-Marie Rindom (DEN), the reigning world champion, won the earlier race, beating Emma Plasschaert (BEL) by 18 seconds. In the second group, it was London 2012 Olympic Gold medalist Lijia Xu (CHN) crossing the line first, followed by Silvia Zennaro (ITA).

Following two races in the Blue and Yellow 49er fleets, Nico Delle-Karth and Nikolaus Resch (AUT) and Portugal's Jorge Lima and Jose Costa are tied on four points after a bullet and a third apiece.

However, the top of the pack could be different. Having won the opening race in the Yellow fleet Jonas Warrer and Anders Thomsen (DEN) crossed the finish line of the second thinking they had the perfect start with back to back victories.

Unfortunately, it was not to be as the pair were black flagged as Warrer explained, “We were a little surprised by the current. I think we got caught about a minute, half a minute before. We won the race even though we had a bad start and we sailed well, we're happy about that but it's a shame that we were over the line, that's life. It's important that we sailed well.”

Counting the 32nd the Danes sit in 25th but Warrer and Thomsen won't be disheartened. They know the venue well, taking bronze together in 2015 with Warrer winning gold in 2014 with Peter Lang.

“We like Miami and the shifty stuff as we're used to shifty conditions from back home,” said Warrer.

“It's good to come over here this time of year. We've come from cold, grey and raining in Denmark and Miami is a good place to sail.

“The level is high, it's always like this with a year until the Olympics. Everybody is improving, including ourselves and the level goes up. A lot of boats can win races. You can be punished for even small mistakes.”

Sailing World Cup Miami acts as a Danish qualifier for Rio 2016 but Warrer and Thomsen are left uncontested so will book their spot to the Olympic Games this week.

After a number of years of Danish skiff success, resulting in Warrer winning gold at Beijing 2008 and Allan Norregaard and Peter Lang picking up bronze at London 2012 the lack of strong Danish skiff crews in Miami can be seen as a bit of surprise.

“I guess I scared everybody away,” smiled Warrer. “It's a shame but most of the sailors were my age and stopped, wanting to try something else. We have good young crews coming up but they need one, two or three years more.

“It is a challenge for us as we need to find someone outside of Denmark to train and to push us. We've found that. We are training with the Germans and it's a really good cooperation and good teamwork. It's good for us as they're based in Kiel but it would be easier if we had some Danish crews at our level. Give it two years though and it will come.”

For now, the Danes are focusing on racing in Miami and have four further races on Tuesday that they will use to propel themselves up the leaderboard. The day's other race win went the way of France's Kévin Fischer and Yann Jauvin.

Australia's Olympic champions Nathan Outteridge and Iain Jensen had their tradionally poor start to the regatta, scoring 24,10 to sit in 27th, behind their teammates David Gilmour and Lewis Brake who are 6th after a good race win (11,1).

In the 34-boat 49erFX pack, Norwegian twins Ragna and Maia Agerup took the single race win late in the day. They were followed by Danish sisters Maiken Foght and Anne-Julie Schütt.

The new pairing of Haylee Outteridge and Nina Curtis performed best of the Australians. scoring 6,17 to be in 10th place. Olivia Price and Eliza Stolly (9,25) are 15th while Tess Lloyd and Caitlin Elks (18,20) are 22nd.

Being first wasn't necessarily lucky for the 470 fleets competing in the 2016 Sailing World Cup Miami presented by Sunbrella. While Miami woke up to a nice breeze, it had started to fade by the time the first gun sounded at 10:00. There was enough wind to make it through one race for both fleets, but that was it. After waiting in vain for something to materialize, the 470s were sent in for the day.

The race for first in the Men's 470 race came down to a battle between Asenathi Jim and Roger Hudson from South Africa and the Ducasse brothers of Chile. The South Americans had the upper hand initially, but Jim and Hudson ground them down on the second beat to take the win.

American medal hopefuls Stu McNay and David Hughes struggled off the line, but managed to stem the bleeding and go on the attack.

“We did not have a very good start because of our own errors, but were able to be in the mix with the peleton working our way up [the first beat],” said crew Hughes. “We got flagged [for a rule violation] during the run, but we ended up only losing one boat on those penalty turns. Things really came together for us on the second upwind, we were able to pass a few more boat.”

Skipped by one more boat on the final run lifted the Americans into fourth, a solid opening race. The Australian team of Thomas Klemens and Timothy Hannah was third in the race, with Onan Barreiros and Juan Curbelo Cabrera of Spain in fifth. World champions Mat Belcher and Will Ryan are not contesting this regatta.

The duo of Fernanda Oliveira and Ana Luiza Barbachan (BRA) won the only Women's 470 race, getting the upper hand in a see-saw battle with Tsuf Zamet and Stav Brokman (ISR). The Israeli team led around the first mark, and stretched away to nearly a half minute lead on the run. But Oliveira and Barbachan turned the tables on the second beat and took over the lead, which they held for the remainder of the race. Marina Gallego and Fatima Reyes (ESP) finished third with Xiaomei Xu and Ping Zhang (CHN) in fourth and Lara Vadlau and Jolanta Ogar (AUT) in fifth.

Carrie Smith and Jaime Ryan (AUS) are in ninth place.

Early days in the Nacra 17 as two races were completed. Dutch racers Mandy Mulder and Coen de Koning enjoyed the best of the day with two single digit scores, a first and a seventh. They lead and are followed by race two victors, Santiago Lange and Cecilia Carranza Saroli (ARG).

Jason Waterhouse and Lisa Darmanin had a solid start with a 19th and third to leave them in sixth place.

Chinese light wind specialists came to the forefront in the Men's RS:X. Chunzhuang Liu claimed the opening victory and was followed by compatriot and 2015 Olympic test event winner Aichen Wang.

Like a fine wine, Jonas Hoegh-Christensen (DEN) appears to only be getting better with age.

The silver medalist from the 2012 Olympics and two-time world champion rounded the first mark in third, jumped into the lead by the leeward mark and never let go. He was, however pushed all the way to the finish by Lei Gong (CHN) who was within 10 seconds of the lead around the final two marks. Teammates Arkadiy Kistanov (RUS) and Aleksey Borisov (RUS) finished third and fourth with Facundo Olezza in fifth. American sailors finished seventh, eighth, 12th, 13th and 15th in the first race of the selection series for the Finn berth at the Rio Olympics.

The French trio have been a mainstay on the Sonar podium following a fourth place at London 2012 but the Worlds in Williamstown, Melbourne saw them finish seventh overall.

They came out firing in the single Sonar racing, winning by a massive three minute 30 second margin over Norway's Aleksander Wang-Hansen, Jacob Haug and Per Eugen Kristiansen. The Australian team is in seventh.

In the light Miami breeze the French pair showed their worth but with the wind to pick up on Tuesday they'll have bigger challenges ahead.

One race was completed in the 2.4mR and the victory was picked up by Canada's Bruce Miller. He was followed by Charles Rosenfield of the USA and Peter Eagar (CAN).

Racing resumes on Tuesday 26 January at 10:00 local time. Having lost races on Monday, the Race Committee will use the day to catch up on the schedule.