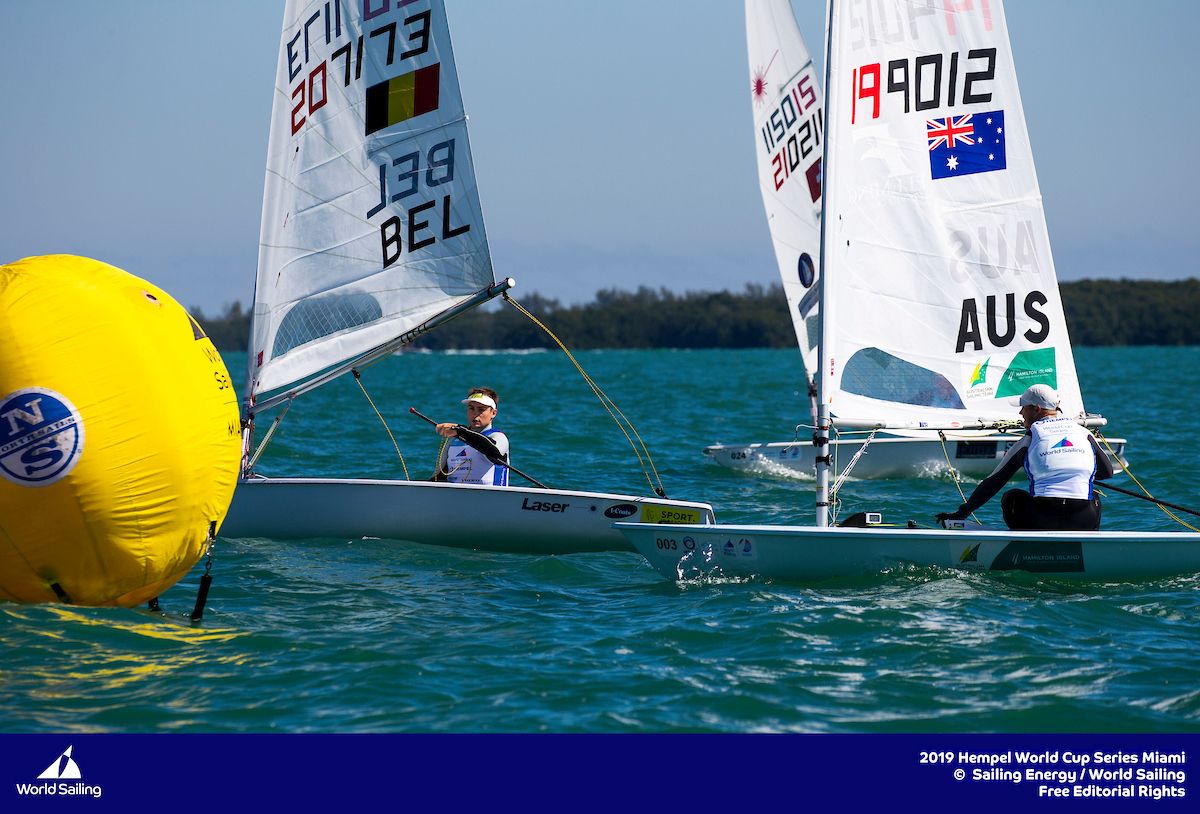 After nearly a month of training and competition on Biscayne Bay, many of the top sailors competing in the 2019 Hempel World Cup Series Miami have seen just about every wind condition Miami has to offer.

But that doesn’t make it any easier to race when the breeze is out of the west, a direction notorious for lower velocity and little consistency when it comes to the wind direction.

“The wind was constantly shifting to the right [side of the course],” says 49er skipper Sime Fantela (CRO), “but the pressure was staying left, so it was not an easy decision where to sail. The ones who managed to tack when they wanted and have their line, they were winning.”

Fantela speaks from first-hand experience. With a 3-13-2, Fantela, who sails with his younger brother Mihovil as a crew, emerged relatively unscathed from the opening day of the regatta and will carry a three-point lead over Diego Botín le Chever and Iago López Marra (ESP) in second and a seven-point advantage over James Peters and Fynn Sterritt (GBR) in third.

Of the three races today, Sime Fantela was most pleased with the second one. The short course format used by the 49er class made passing a challenge.

“The start was not that great, and we managed to come back,” he says. “We rounded [the first mark] I think in 23rd and managed to finish around 12 to 15. It’s quite tough with 40 boats on the start and the racecourse was a short course so not so many clear lanes. You have to dig your way through.”

Like the Fantela brothers, the team of Botín le Chever and López Marra also struggled in the second race, finishing 16th. But a win in the first race and a fourth in the final one more than balanced that one hiccup.

“Try to make a good start and then see what’s going on and try to catch the best shift,” said López Marra when asked about the key to a strong race today.  “The seabreeze and the gradient wind [were fighting one another] and that’s why it was so shifty.”

As Spain was unable to qualify for a country berth in the 49er class at last summer’s Hempel Sailing World Championships in Aarhus, Denmark, the top priority for Botín le Chever and López Marra is to earn that berth this year at the world championships in New Zealand at the end of the year.

That’s one box that has been ticked by Sime and Mihovil Fantela. They are the defending world champions after a breakout performance in Aarhus and have punched their ticket to Tokyo. However, as they are relatively new to the class—Sime won a gold medal in the 470 in Rio 2016 while Mihovil sailed in the RS:X class until 2016—they are not letting that success go to their heads.

“We still have the same goal, the same focus, the same will to train and improve,” said Sime Fantela. “We missed some strong wind training [last year] so we’re trying to look this season for the strong wind places to go and train. Lots of training, lots of days out of home and looking forward to Tokyo.”

The 30-boat 49erFX fleet followed the 49ers later on in the afternoon and in a shifting and variable breeze, just one race could be completed.

Sophie Weguelin and Sophie Ainsworth (GBR) found some form and led the race from the top mark through to the finish. Alex Maloney and Molly Meech (NZL) and Germany’s defending champions Victoria Jurczok and Anika Lorenz (GER) followed.

American favourites Stu McNay and Dave Hughes avoided any major pitfalls on the water and stand in third place, of 37 boats, after two races in the Men’s 470.

“We rolled a third and a fifth today,” says McNay. “We did the big picture things right, but made a couple small errors. We did lose a couple of points. Dave and I have been sailing for a long time, we’ve raced in Miami for years. It’s a challenging venue, so we’re always glad when we walk away from a shifty day like this with scores we can carry forward.”

For Hughes, this regatta as close to a home event as he’ll ever get, something he tries not to take for granted.

“This is always a lovely event and always kind of the way to start the year for us,” he says. “I live in Miami, so it’s got a special meaning for that. It’s a bit of an added stress because it is a home event and we are always looking to be proper hosts to everybody who comes here, off the water, at least. But it’s wonderful because all of our international friends come to our home. It’s a treat and for us this is just a staple of our sailing and our Olympic careers.”

With a seventh at last summer’s Hempel Sailing World Championships in Aarhus, Denmark, McNay and Hughes qualified for the United States for the berth in the Men’s 470 class at the Tokyo 2020 regatta. Now they are focused on making sure they are the team to claim that berth. They’ve been down this road before, having sailed together in the Rio 2016 regatta — McNay sailed with a different partner in Beijing 2008 and London 2012 — but that doesn’t make it easy.

“We’re trying not to be distracted, trying to keep our priorities in line,” says McNay. “Not let one piece of equipment become distracting, not let one detail of a skill become distracting. Give our prioritization to each item, as it deserves, as it will help us most, which is a challenge because perspective is the easiest thing to lose when your head is this deep in something.”

Anton Dahlberg and Fredrik Bergström (SWE) hold the early advantage in the Men’s 470 on five points. They are two points clear of Italy’s Giacomo Ferrari and Giulio Calabrò and a further point ahead of the Americans.

The Italians took the first race win of the day and Japan’s fifth placed team of Tetsuya Isozaki and Akira Takayanagi sealed the second.

Among the fleets that got in two or more races, only the Women’s 470 duo of Agnieszka Skrzypulec and Jolanta Zohar (POL) had a perfect day, winning both races. They trailed around just two of 12 marks and currently have a six-point lead over Fabienne Oster and Anastasiya Winkel (GER) and a nine-point advantage over Benedetta di Salle and Alessandra Dubbini (ITA).

Spain’s Angel Granda-Roque and China’s Bing Ye are tied on nine points apiece in the Men’s RS:X after a tough day on the water. In light winds the sailors had to pump their sails hard to take the initiative. Granda-Roque took an eighth and a first with Ye securing a fifth and a fourth. The first victory of the event went to France’s Thomas Goyard but a blackflag in the second pushed him down to 29th overall.

Just one race was possible in the Women’s RS:X and China’s Yunxiu Lu took the win. She was followed by Italy’s Flavia Tartaglini and Israel’s Yarden Isaak.

Brazil’s Samuel Albrecht and Gabriela Nicolino de Sa shone in the Nacra 17, snapping up two out of three victories. The pair thrived in the 7-9 knot breeze on the Echo racing area and discard the seventh they picked up in race two.

London 2012 Olympic bronze medallist Jonathan Lobert (FRA) picked up the single race win in the 25-boat Finn fleet. The towering Frenchman fought hard against Croatia’s Josip Olujic throughout the race and the momentum swung back and forth. Lobert held the lead early on in the race but the Croatian hit back to claim it at the midway point. Lobert advanced on the final run and took the race win by just two seconds.

The Laser fleet is the largest in Miami with 101 boats registered to race. As a result, the first two days of competition are qualifying races before the top sailors move into the gold fleet to decide who qualifies for Sunday’s Medal Race.

The top ranked sailors were all aiming to get off to good starts and they did exactly that. In the yellow fleet, Rio 2016 bronze medallist Sam Meech (NZL) and World Cup Final medallist Hermann Tomasgaard (NOR) took a race win apiece with another single digit finish. Meech leads on three points with the Norwegian second on four. Matt Wearn (AUS) posted a 5-4 in the yellow fleet and is third.

In the blue fleet, consistency was at a premium. Joaquin Blanco (ESP) and Elliot Merceron (GBR) were the top performers and are fourth and fifth overall. Blue fleet victories went to William de Smet (BEL) who is 22nd and the 18th placed Yuri Hummel (NED).

The Laser Radial class was able to get in just a single race, which was won by Dongshuang Zhang (CHN) with Zoe Thomson (AUS) in second and Anne-Marie Rindom (DEN) in third.

Racing resumes on Wednesday 30 January at 10:30 local time. The fleets who were unable to complete a full schedule of racing on Tuesday will sail an additional race, minus the Men’s and Women’s RS:X.