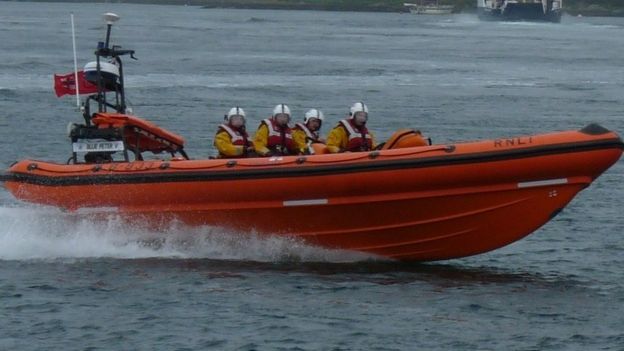 The RNLI Portaferry lifeboat went out to help the yacht . Photo RNLI.

An “inexperienced” sailor who tried to guide his recently-bought yacht from Whitehaven to Galway was rescued after drifting at sea for more than 24 hours.

A search was launched after his family contacted the coastguard to report the boat missing at about 22:45 on Tuesday. It was last reported to have been near Mull of Galloway lighthouse at about 11:45 the same day.

A search was launched and the yacht was located at about 22:30 on Wednesday and the man on board was safe and well.

Portpatrick, Drummore, Newcastle, Ballycastle, Bangor and Coleraine coastguard rescue teams were part of the operation along with the RNLI Portaferry inshore lifeboat from Northern Ireland, as well as the HM Coastguard search and rescue helicopter based at Prestwick. The helicopter eventually located the boat near South Rock, about 17 miles off the Mull of Galloway.

The RNLI Portaferry lifeboat went to help the yacht, which had suffered engine problems, and towed it into Portavogie in County Down.

Coastguard senior maritime officer Connor Lawson said the journey had been progressing well as far as the coast near Dumfries and Galloway.

“He purchased the boat not that long ago in Whitehaven in England and intended to sail it all the way to Galway via the north coast of Northern Ireland,” he told BBC Radio Ulster. “Initial passage was successful and he confirmed a safe arrival at a port called Port William in Scotland.

“Later on that day he had also communicated with his family that he was still making progress around the Mull of Galloway – at that time everything was OK on board. That was the last contact that was made with the family who then raised their concerns with us later that day.”