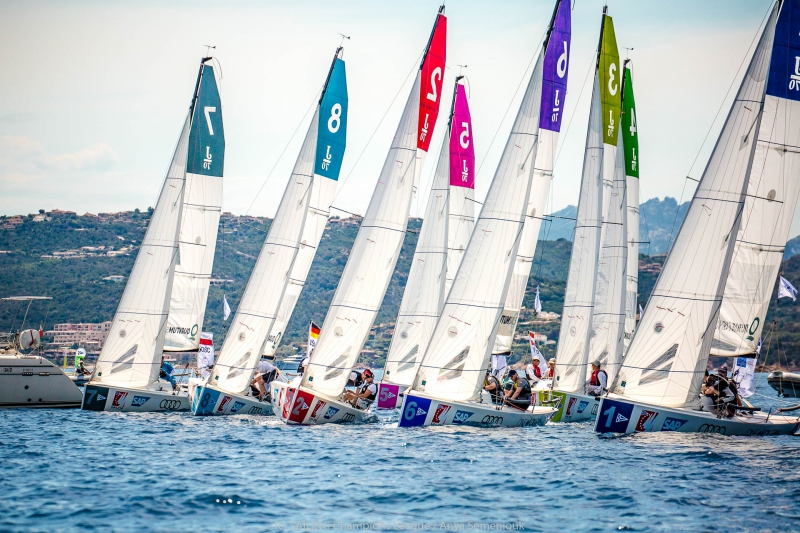 Porto Cervo, Italy: After a second busy day at the One Ocean Sailing Champions League, the team from Switzerland's Bodensee Regattaclub leads the provisional classification with two more days of racing still to be held.

The event, organised by the YCCS with the partnership of the One Ocean Foundation and the support of main partner Audi, will conclude on Sunday 26 May.

Following an initial delay due to light winds, the competition on the water began at approximately 1 p.m. The arrival of the thermal breeze from east-southeast blowing at 5 to 7 knots allowed 15 races to be held today, thereby completing the 9th flight out of a total of 15 scheduled.

The Bodensee Regattaclub moved up the rankings thanks to two wins and three second places today and now sits on the highest step of the podium, leaving its opponents seven points behind.

The second and third-placed teams are on equal points, with a positive day unfolding for the Circolo della Vela Bari despite a penalty for crossing the starting line early in the sixth flight. They hold second place overall ahead of the German team from Verein Seglerhaus am Wannsee in third.

Rene Ott, bowman for the Bodensee Regattaclub, commented: “We trained a lot in Switzerland in light wind conditions and so we raced well today.

“Reaching the final is our main objective and even if we are in the top seven positions our approach to the racing will remain the same. The success of our team is down to consistency, we will try to compete without taking risks.”

The regatta is held in the name of One Ocean, the environmental project launched by the YCCS in 2017 on the occasion of its 50th anniversary, which in 2018 became a Foundation. During the event all participating sailors are urged to reflect on the topic of marine pollution by answering targeted questions.

When asked what actions she takes to avoid marine pollution, Dutch sailor Marieke Poulie of the KNZ&RV Muiden team declared: “First of all, by avoiding throwing things in the water when I sail, but even at home I am careful to properly recycle garbage, when I am ashore I try to collect plastic or objects that can be dragged and dropped into the sea by the wind.

“I think it's important to behave properly not only when we practice the sport of sailing, but each day in our everyday lives.”

Last year, the YCCS developed “10 sustainability tips for sailors” providing a practical action guide dedicated to all participants in regattas.

The crews will meet tomorrow morning in Piazza Azzurra at 9 a.m. for the usual Skippers' Briefing and races are scheduled to begin at 10 a.m. with easterly winds of 10 to 15 knots forecast.

Quantum Sails and Garmin Marine are technical partners of the event.