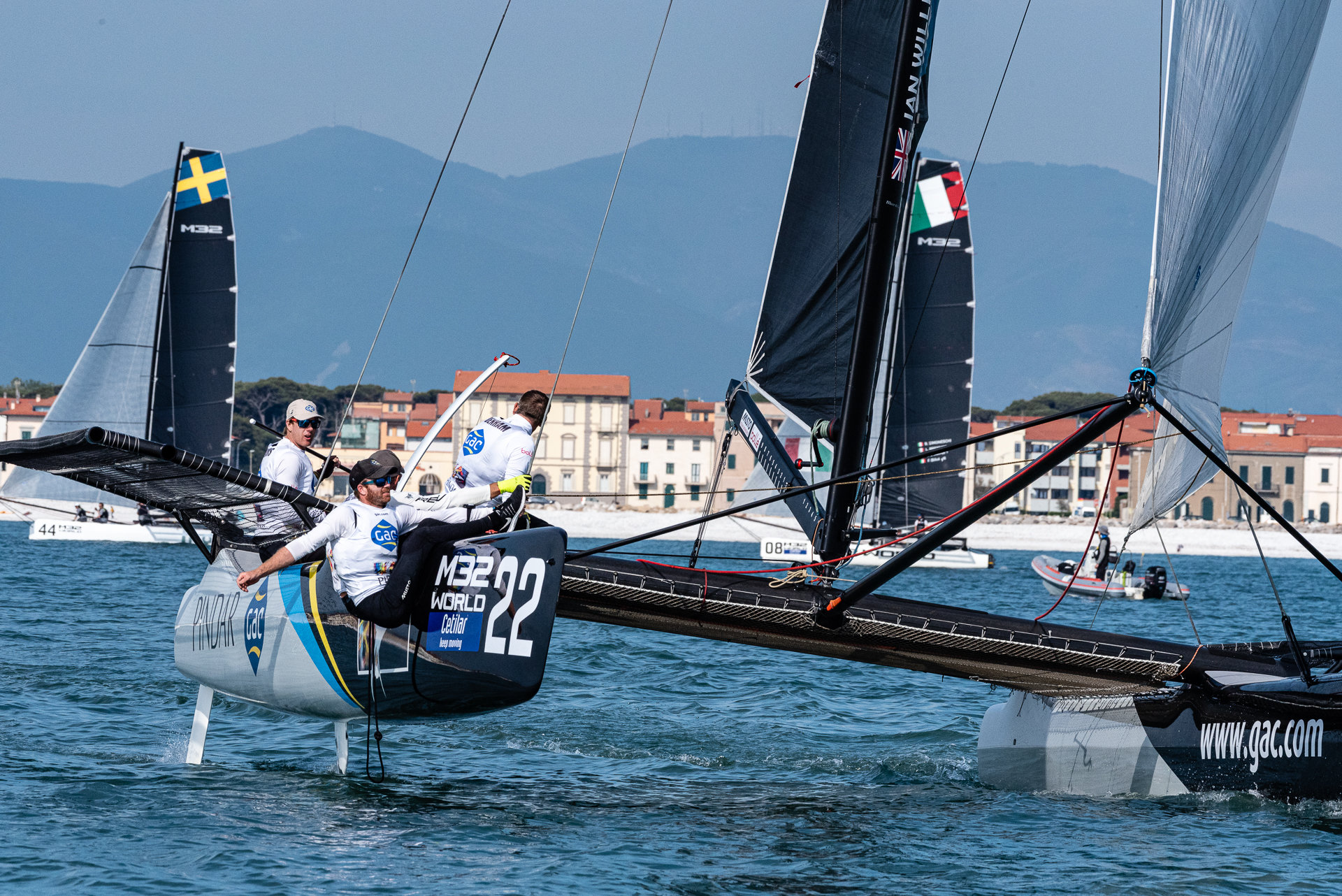 Pisa, Italy: The opening day of the Cetilar M32 European Series could hardly have been trickier, as a gentle 4-7 knot sea breeze wafted across the course when seeing, predicting and working the breeze was the order of the day, something that is always easier to do in hindsight than it is in the heat of the moment.

And while the M32 is a light cat with an impressive power to weight ratio that allows them to race in these conditions, no one was pretending that the six races that were planned for the day would be easy. They weren’t, not even for the hot shots.

Ian Williams’ team arrived as the favourites with a wealth of experience and talent aboard GAC Pindar. A six time World Match Racing Tour champion, Williams has spent many years racing the M32 and knows the cat inside out. And with a crew that includes Paul Campbell-James, Richard Sydenham and Pete Nichols, few were ever going to bet against GAC Pindar.

But, despite the odds being stacked in their favour, the opening race didn’t go at all to plan as Williams spent the entire race chasing M32 newcomers Spindrift racing around the course.

The French team, which is more famous for its giant offshore tri, was being skippered by Xavier Revill who was standing in for Yann Guichard.

This was Revill’s first race helming an M32 and in talking the first win of the event there were plenty who were wondering whether Williams, who ended up in third finishing behind Richard Davies’ Section 16, had met his match in the former French Olympic Tornado sailor.

But any doubts as to whether Williams’ team was going to dominate the day were gradually put to bed with the performance that followed.

With the sun heating the land and the thermals rising off the mountains in the distance, a sea breeze had established itself in the early afternoon and looked set to continue. But as higher cloud drifted in casting shadows over the land, the heating ashore reduced causing the sea breeze to drop and shift in the process.

The day was clearly not going to be easy, yet Williams and Co. demonstrated a formula that appeared to work time after time.

The recipe started with winning the start, usually by taking the pin end of the line and sailing high and fast to the first mark. Leading the field at this stage and conscious that this was a day for keeping manoeuvres to a minimum, the team headed out on starboard to the corner of the course on the downwind leg and gybed only when they could lay the leeward gate.

While heading towards the gate on port, with no one to trouble them on starboard, they did everything they could to build apparent wind speed quickly in order to fly a hull well before anybody else and then keep it there.

First through the leeward gate gave them the opportunity to bang the right hand corner of the beat and lay the top gate: A one tack, no nonsense beat.

From there it was a case of repeat until finish…easy, except everyone knew it wasn’t.

“It was a great day for GAC Pindar, but today I think it was all about the starts which were critical,” Williams said. “If you were in the lead at the first mark, the rest was pretty straightforward.”

In the six races of the day, GAC Pindar won five using most of the elements of this formula for success each time.

Things were not this straightforward in the pack. While the rest of the fleet struggled to hang onto Williams’ coat tails, they had plenty of close racing to contend with ensuring that few would be able to break free to chase the runaway leader. Nevertheless, there were some impressive performances.

Among them was that of Spindrift racing, the comeback kings of the day. Time after time, Revill and his crew managed to pull themselves back into the running from some difficult positions.

“We had a very good first race but after that we didn’t manage to make such good starts,” Revill said.

“We battled a lot during the day and came back from some bad places. One of the keys is how and where you tack and gybe which, even if you’re at the back can get you into contention again. I need to improve my starts – I’ve never done a reaching start before – but I think we can be better here.”

Williams was quick to acknowledge the challenge from the French team: “Spindrift were sailing really fast today and pushing really hard. If they get off the line fast, they will be a big threat.”

Richard Davies and his crew aboard Section 16 had demonstrated pace aplenty but he too came ashore keen to improve the starts: “I think we’ve got good boat speed and are quick around the course but we need to work more on our starts. Upwind is a good mode for us though which is great because it is something we’ve worked really hard on.”

Local sailor Andrea Lacorte sailing Vitamina Veloce also found good speed at times, especially downwind and ended the day in fourth overall, tied on points with Swedish sailor Richard Goransson – the first hint of what looks set to be a battle in the mid-fleet.

Just a handful of points behind, Daniel Bjornholt’s Danish Youth Vikings and Hakan Svensson’s Swedish team Vikings are making it clear that the battle for the podium is going to be hard fought and nothing should be taken for granted after the first day.

Tomorrow’s weather forecast looks similar to today’s, but light weather lessons are being learned quickly and with some impressive turns of speed across the fleet, the racing looks set to get closer.