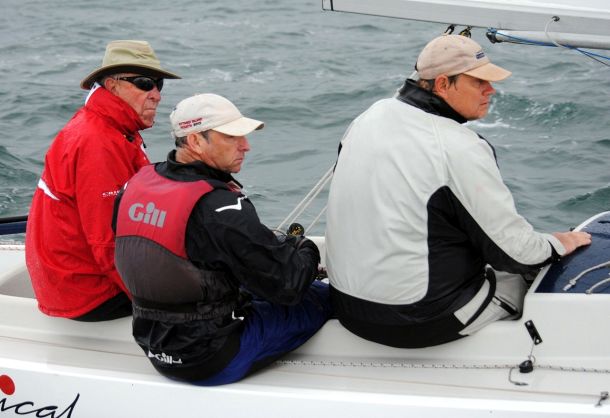 Sailing is certainly a sport for all ages, as was demonstrated in Royal Sydney Yacht Squadron racing on the Harbour last Saturday when the helmspersons competing ranged from a 13-year-old girl Optimist sailor moving up to the Yngling class to an 88-year-old former Olympic yachtsman winning in the Dragon class.

While the Dragon fleet was small, the Ynglings were out in force as the class gets a significant boost leading up to next year’s 50th World championship in Austria.

Three or four crews from the Sydney fleet are expected to compete in the worlds, twice won by Australia in the past.

Gordon Ingate showed he has lost none of his skill on the helm of an International Dragon, steering Whimsical to two wins and a third in the Squadron’s Mini B regatta for Dragons, Ynglings and the newly introduced Sports Boat division.

In three close races, Liquidity (Richard Franklin) won the opening race for the Dragons from Shapes (Wolf Breit) and Whimsical, with just 15 seconds between the three placegetters.

Whimsical crossed the line just 47 seconds clear of Shapes and Abracadabra in race two, but in race three Ingate had to use all his tactical skills to beat Shapes to the finish line by just six seconds.

Ingate is the Prince Philip Cup defending champion and the Royal Yacht Club of Tasmania hopes he will ship Whimsical south to Hobart for the 2016 regatta on the Derwent where he won his first Prince Philip Cup in 2008, aged 82 and after 50 years of sailing a Dragon.

While Gordon Ingate has been racing for more than 80 years in one-design World Championships, the Olympic Games, America’s Cup, Admiral’s Cup and the Sydney Hobart ocean race, last Saturday’s regatta was a first in the Yngling class for 13-year-old Sarah Leslie.

A keen Optimist dinghy sailor with the RSYS Youth Sailing Squad, Sarah helmed Shining Star with her mother Tracey and Jan Harper as her crew.

Racing against a fleet of experienced, and much older Ynglng sailors, Sarah finished seventh in race one, only 3 minutes and 39 seconds astern of the winning boat.

As the breeze freshened, Shining Star and her lightweight crew slipped to finish last in race two and a rather tired team elected to miss the third intensive race.

Miss Pibb, helmed by national champion Hamish Jarrett, came out number one in the Mini B regatta with two seconds and a first, just ahead of Karma (Gary Wogas) with a 1-3-2 score. Soria, helmed by Robyn Grosvenor, also had a good regatta with a 3-1-3 score.

The Mini B regatta also attracted a fleet of six starters in the new Sports Boats division with Andrew York’s Speedwagon taking line honours in all three races.