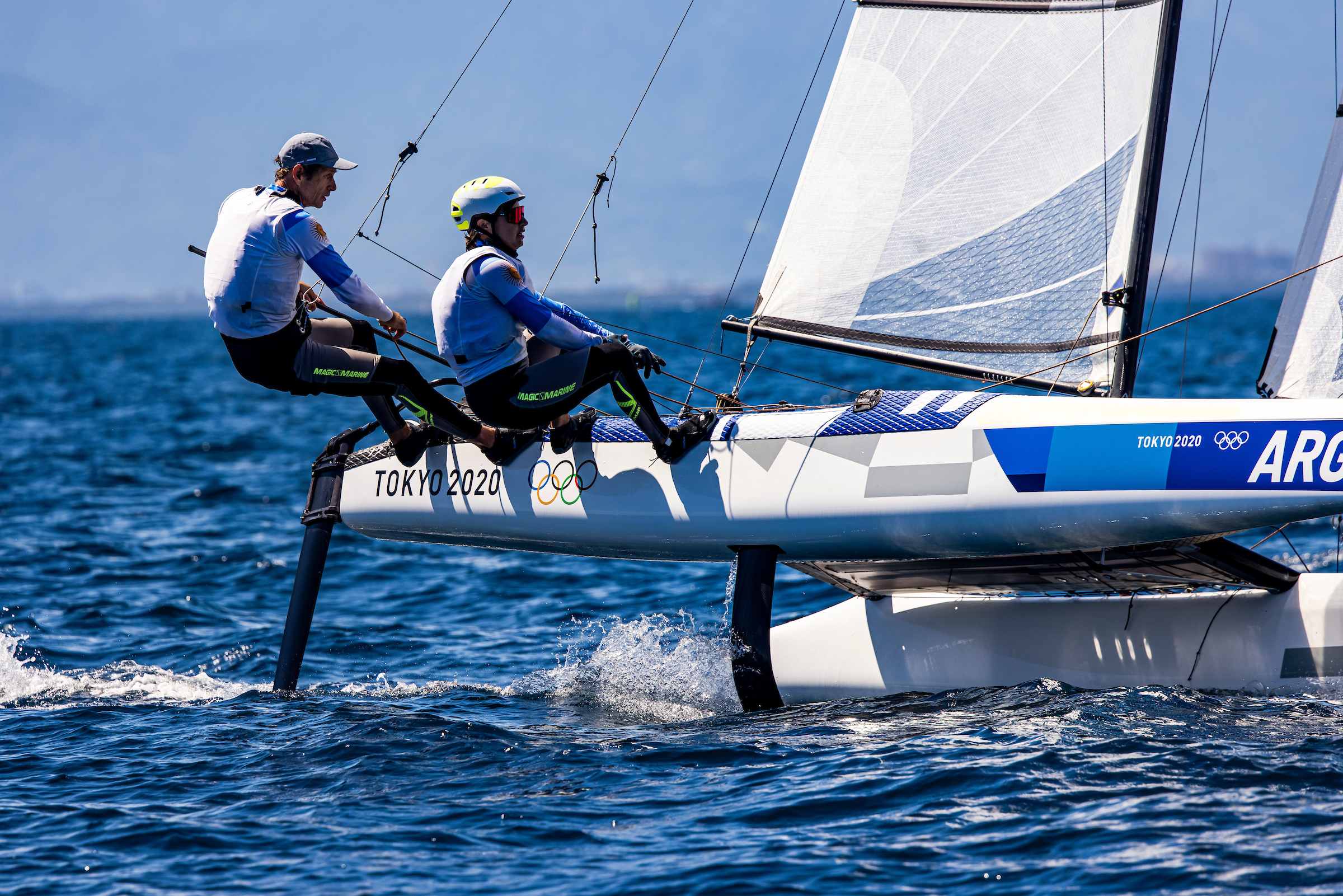 There is no greater honour than carrying your national flag into the Olympic Stadium, and for the chosen few who become flag bearers for their nation, this evening’s Opening Ceremony was one of the most special of their lives, including those of respected Olympic sailors from 10 nations.

The sport of sailing is well represented among the list of flag bearers. A male and female athlete from each nation will share the flag bearing, in most cases athletes from different sports. However, for Argentina it is the tight-knit Nacra 17 crew of Santiago Lange and Cecilia Carranza Saroli, who will walk around the Olympic track side by side.

“It is an incredible honour for us, for Ceci and me to have been named to carry the flag,” said Lange, at 59 years the oldest competitor in the sailing at Tokyo 2020. “We are so privileged and so thankful for the people that have worked with us, all our teammates and coaches that have brought us to this incredible opportunity.

“We’re so thankful for the people that have brought us to this point in our sporting career – my sons, my family, my friends, my coaches – they are so special for me, and I think they will be carrying this flag with us.”

Not far behind Argentina’s Nacra 17 Rio gold medallists were the 2016 bronze medallists from the same event, Austria’s Thomas Zajac and Tanja Frank. Although they are now sailing in different boats – Zajac continuing in the Nacra 17, Frank now in the 49erFX skiff – last evening the old teammates are reunited to walk the Austrian flag into the stadium.

“The pandemic and its consequences undoubtedly make the Olympic Games in Tokyo very special,” Zajac said. “But that doesn’t change the fact that I consider it an honour and a great privilege to march in with the red-white-red flag together with my former teammate Tanja.

“I feel a connection with the Olympic movement, not only because of the medal I won in 2016, but because it brings strong emotions and many very good friendships. To be able to represent one’s homeland and at the same time be part of this movement is in my eyes the greatest thing that an athlete can achieve.”

Frank added, “For me, carrying the Austrian flag at the opening ceremony is a very great honour – and also a dream come true. I am very grateful that the Olympic Games will open with an atmospheric ceremony and that I have been chosen to represent our country as the standard bearer. I’m looking forward to it and I’m also very happy to be able to experience this special moment with Tom.”

Hannah Mills, looking for another Women’s 470 medal to add to her Silver and Gold from the past two Games, was overcome with emotion on learning she would be representing Great Britain at the ceremony.

“Carrying the flag for Team GB at the Opening Ceremony of the Olympic Games is not a sentence I ever thought I’d say,” Mills expressed. “It is the greatest honour in my career, and I hope more than ever before, this Games can lift our country and deliver some incredible sporting moments to inspire the nation.”

Swedish Finn sailor, Max Salminen, who won Olympic gold in the Star Keelboat at London 2012, said you don’t say no to such an invitation, even when it arrives so unexpectedly. “I was told on Thursday while collecting my breakfast in the Olympic Village.

“At first it felt like really sudden and short notice, but there is only one answer to that sort of a question. It felt like a huge honour for me, especially with the motivation I got from the Swedish Olympic Committee.

“I was picked not only because of my results, but because I was considered a role model for athleticism and fair play. For me, this is one of the biggest acknowledgements one can get as an athlete and Olympian.”

Enrique Arathoon will be competing in the Laser Men’s One-Person Dinghy for El Salvador. “I feel it’s a big responsibility because I’m carrying the hopes of many El Salvadorians and it’s a great honour. It’s the icing on the cake. This is not part of our dream but it’s a really special thing that makes all of this so much more special.”

For most Olympic athletes, being nominated as standard bearer is a once-in-a-lifetime experience, but for two Laser sailors this will be their second time of being given the honour.

About to compete at his fourth Games, Juan Ignacio Maegli bore Guatemala’s flag into the stadium nine years at London 2012, and was chosen again this time. Sharing flag-bearing duties with Juan was his sister, Radial sailor Isabella Maegli, who carried the flag at her very first Olympic Games.

Five years ago, Rodney Govinden carried the flag for the Seychelles into Rio, and found out earlier than most that he would be doing the same again. “I was informed by the Seychelles Olympic Committee just prior to the sending off meeting that we had with the President at the State House.

“It’s a great honour to be the flag bearer for my country, especially being my second time following the Rio Olympics. I am very happy and feel proud to be leading out the team once again.”

Another sailor from an African nation this evening was Matias Montinho, who was nominated to bear the Angolan flag around the stadium.

Jonas Warrer, Beijing Olympic gold medallist in the 49er, sparked many memories among his fellow Danes at home as they watched him carry their flag. Now aged 42, he’s one of the older competitors in the athletic skiff class and is happy to still be competitive so many years after winning that Gold in an extraordinary Medal Race in extraordinary circumstances.

“I’m extremely happy for doing what I do – sailing the 49er. That’s my main driving force, that I love sailing the 49er. Winning in 2008 was obviously an amazing experience. Everything went our way in the end.

“Reaching your childhood dream goal was fantastic. Coming back to Denmark – where everybody had followed the drama with our broken mast, borrowing the Croatian boat and the protests – was amazing.

“Everybody suddenly knew about Olympic sailing and what a 49er was. Still I meet people who are moved by it, and who knew exactly where they were, and what they were doing.

“Now I’m sailing with Jakob (Precht), and I think our team work and our journey has been really good. We have enjoyed it and had fun all the way – that’s important to me. And we have improved and developed a lot.

“I was extremely honoured to be the flag bearer. Being part of that small group of people who have done that, that’s huge. I was told a couple of months ago by the Chef de Mission for the Danish Olympic Team. I had to keep it a secret until it was announced. I remember when I told my kids about it, I could see in their eyes they were proud – that means a lot to me.”

“We know they will proudly represent themselves, their nation, and the sport in front of the watching world. Congratulations to them all.”

At the Opening Ceremony, Tokyo 2020 will aspire to reaffirm the role of sport and the value of the Olympic Games, to express gratitude and admiration for the efforts the global population has made together over the past year, and also to bring a sense of hope for the future.

Tokyo 2020 hope it will be an experience that conveys how we all have the ability to celebrate differences, to empathise, and to live side by side with compassion for one another.