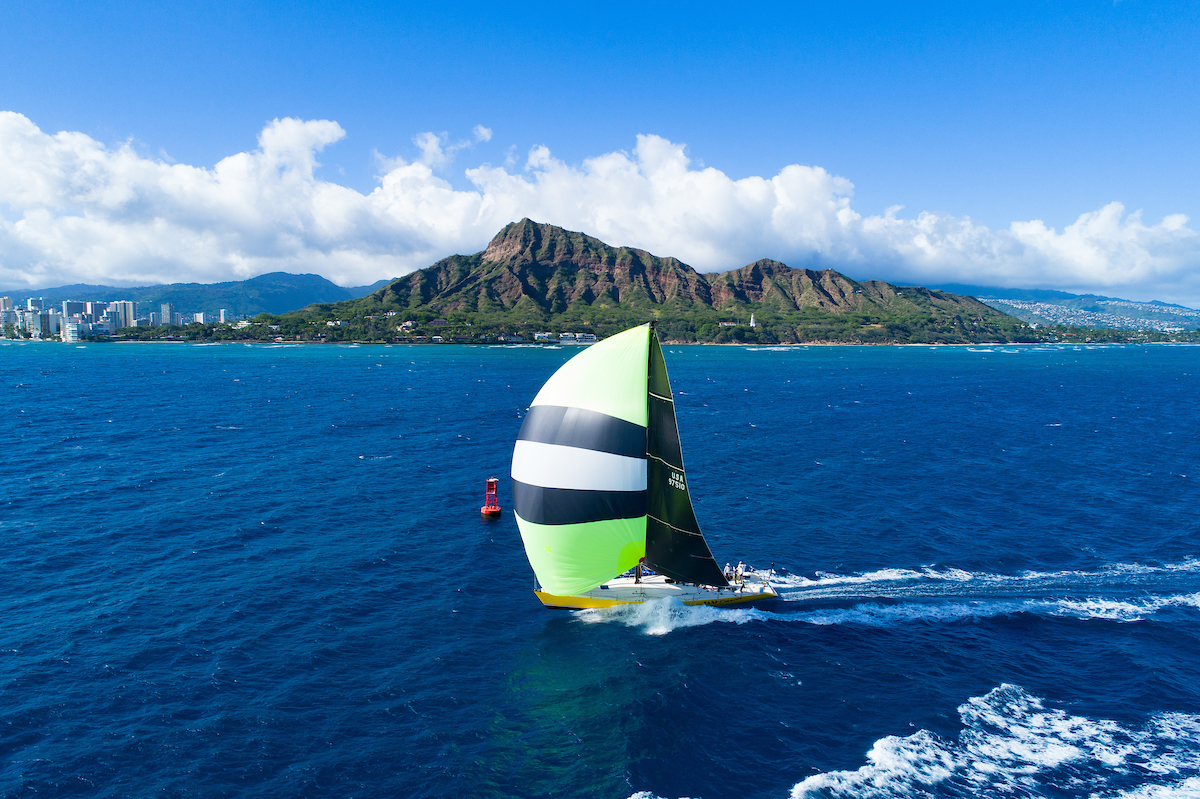 Honolulu, Hawaii: All eyes are on the trackers to anticipate the arrival of the first finishers in the 2021 Transpac, as the favorable weather in this year’s 2225-mile race, from Los Angeles to Honolulu, has resulted in shorter distances and higher speeds for the fleet.

First on line is Roy Disney’s turbo Volvo 70, Pyewacket, whose high-speed approach from the north-east is burning the remaining miles quickly. At 9:00pm local time, she was 97 miles from the finish line at Diamond Head. This is a distance most boats do in a half a day of hard racing, but Pyewacket’s 20 plus knots will put them within the finish area in half that time.

Second on line is Cecil and Alyson Rossi’s Farr 57, Ho’okolohe, which at 9:00pm was around 125 miles from the finish. With her speed of 11-12 knots, Ho’okolohe will be the first daylight finisher sometime around dawn – if all continues to go well.

Transpac finishes in the early morning hours at Diamond Head are spectacular, so it will be a beautiful arrival for this mixed team of California and Hawaii-based sailors on the Farr 57.

The two crews will start a wave of other finishers coming into either the Ala Wai Yacht Harbor in Waikiki or for the deep draft boats into Honolulu harbor. Pyewacket will berth at the Aloha Tower near downtown, which will be fairly quiet in the pre-dawn hours, except for those greeting Disney and his team.

Transpacific Yacht Club race officials will present the famous first-to-finish Barn Door Trophy to the first team after their arrival.

With no large final awards ceremony planned this year, due to Covid, all teams winning perpetual awards in this race will be presented their trophies individually soon after finishing.

On the course, crews are settling into routines of fast downwind sailing, and finding the time to be expressive about their adventures at sea.

This account comes from John Schulze’s Santa Cruz 50, Horizon, crew: “The last 24 hours of sailing provided blue skies this morning after an intense 10-minute rain shower at 7am, so the crew on deck got a free shower with fresh rainwater!

“Winds continue from a north/north-easterly direction as we sail along on our Code 2 spinnaker, but wind velocities have increased to 20-22 knots, with a brief period of 24 knots, while we were in the vicinity of the rainstorm.

“Seas are now a bit bigger, which is good for us, because frequently it allows the opportunity to surf down a wave, thus increasing our average speed toward the mark.

“One side effect of the bigger seas was that when the wind and rain increased, one rogue wave splashed over the top of the cabin house, down into the aft cockpit, and down an open cabin hatch. Horizon is normally quite a dry boat, even in rough seas. The unwelcome wave prompted us to move the on-deck sail bags (ie ballast) further back to redistribute weight and keep the bow further above the attacking waves.

“Temperatures are warm, but not overly so, when sitting directly in the sun, which is now shining down on us with great intensity. We have our cooling fans going full force below decks to avert the eastern Pacific heat and the crew are now walking around without shirts. The sea breezes are still fresh and cooling.

“All the crew are in good spirits, and getting at least some sleep, although last night was pretty demanding sailing for the rotating watch crews on deck.”

Earlier today Horizon closed a 13-mile gap on Triumph, Steve Sellinger’s sistership SC 50, to take the lead in Division 6. This competitive class – often called ‘the Fabulous Fifties’ – will no doubt see more lead changes as the yachts make the final run into the famous Molokai Channel before making landfall on Oahu.

At their current rate of progress, Horizon and the rest of the 50s are expected to arrive on Sunday local time.

For entries and all information: https://transpacyc.com