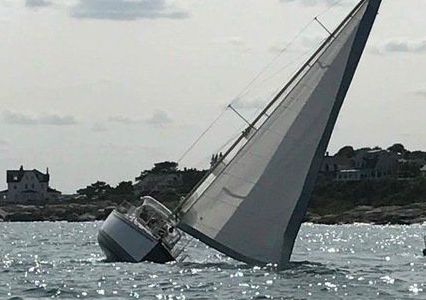 The yacht on the rocks off Marblehead. Photo courtesy of Neal Kaiser.

By Ehan Forman of The Salem News.

MARBLEHEAD — Swampscott boater Neal Kaiser happened to be motoring from Swampscott to Marblehead with his son Jasper when they saw a sailboat tilting back and forth in the vicinity of Tom Moore Rock off Marblehead Neck.

Kaiser found the boat's maneuvers strange, but at the same time they thought it was performing some sort of exercise. Kaiser stopped his boat behind it to watch.

“About a minute later we heard their mayday call saying they were stuck on rocks and couldn't get off,” Kaiser said in response to a questions about the incident on Facebook. “About a minute or so passed and there was no response to their call. They then put in another mayday call and stated they were taking on water (the rocking was getting worse at this point). We then motored up to them to make sure everyone was OK.”

Those aboard the 42-foot sailboat that ran aground and sank Saturday afternoon are safe, and it's expected the boat will be salvaged on Monday, police said.

Read the full story, including the continued calls to the Coastguard, at The Salem News.