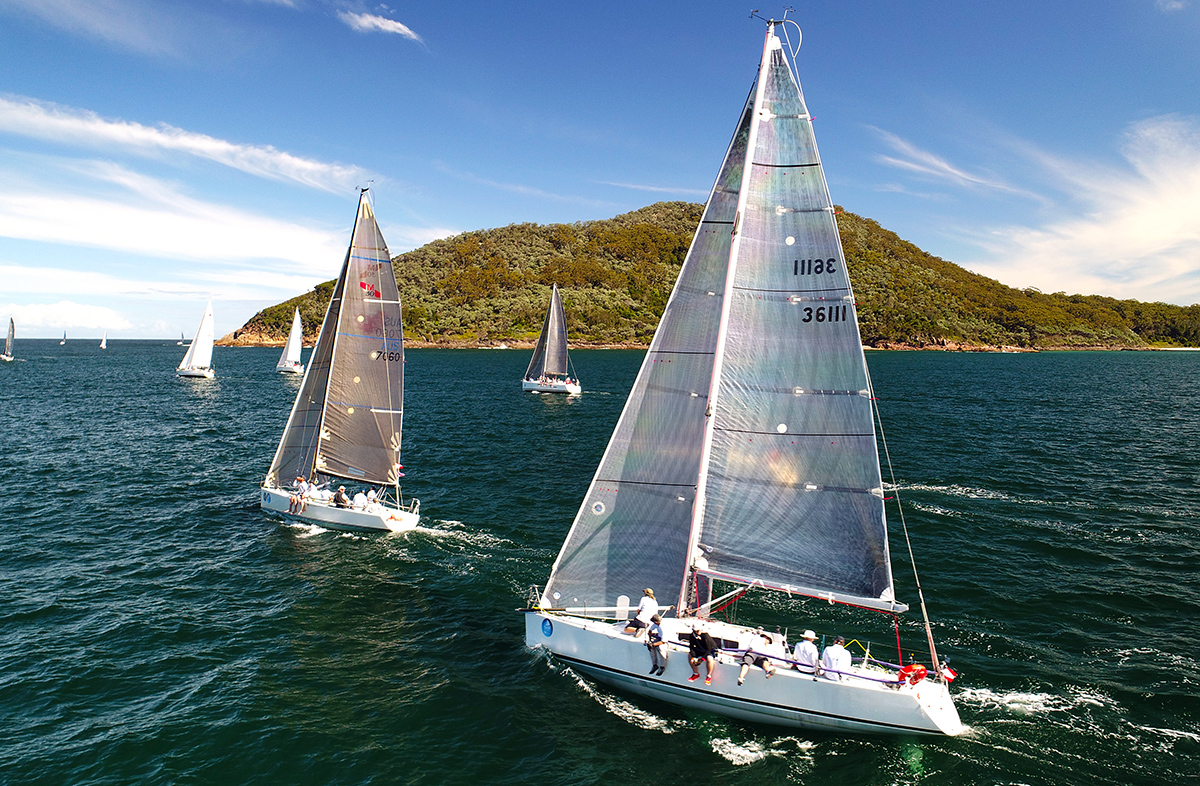 The record 112 boats and crews made the journey to Port Stephens from South Australia, Victoria, Queensland and other NSW ports for the week-long event split into two halves and deemed the best-ever in terms of perfect autumn sunshine and a range of manageable sailing conditions.

IRC NSW state title winner RKO, Aaron Rowe’s Sydney based TP52 from the Cruising Yacht Club of Australia, was in a league of its own over the three days. Rowe and his top crew scored 1,3,1 in Sunday’s building NNE breeze up to 16 knots, adding up to a combined low-score of nine points from six races.

“The standout for me was how hard the crew worked in terms of getting to the regatta and right throughout, making sure the boat went fast,” Rowe said. “The weather, competition and regatta management were fantastic. We were very pleased to battle it out against the other 52s and come out on top.”

“It’s our third year of winning the NSW IRC championship,” said a delighted Cox. “The first year we had a good margin, we won on a countback last year and again this year. I can’t believe it. Full credit to Bushranger, they had our number throughout the regatta.

“I asked the crew about the points situation going into the last race and they wouldn’t tell me, they wanted to keep me positive. We left nothing on the track in terms of crew handling. It’s very rewarding coming off our second in division one of the Australian Yachting Championship two weeks ago,” Cox added.

Performance Racing division one went outside the Port Stephens entrance to deep water for their three final short courses on the same track as the IRC fleet and Super 12s.

Over five races, Rob and Corinne Franci’s MBD41 The Banshee (Cronulla Sailing Club) was too good for Phil Arnall’s Newcastle based Corby 43 Anger Management and Kristy and Warren Buchan’s Colortile from CSC in third.

Performance Racing division two was inshore racing on the same course as the sports boats for their final three windward/leewards.

Fareast 28 distributor Geerit Veenemans is taking the division two overall trophy back with him to the Royal Queensland Yacht Squadron, having created a three point separation to the second-placed boat, another Fareast 28 from RQYS, skippered by Matthew Brown and called Sea Dragon.

“We are very happy, we have a really good crew and the boat likes light wind, plus we love windward/leewards,” said Veenemans of Sunday’s short course format and inshore conditions – flatwater and 4-7 knot easterlies.

The Performance Racing fleet included a number of out-of-towners from Queensland and one syndicate of owners from Adelaide who stepped on their new Modified Mumm 36 on Friday for the boat’s first race.

Day one of the Pantaenius Port Stephens Trophy marked the maiden outing for Brett Brown, Richard Harries and Ian Metcalfe who stepped up to a racing boat in time for the 10th anniversary regatta, an event they would return to “in a heartbeat” says Harries.

From Port Stephens, Magic will be delivered back to the Cruising Yacht Club of South Australia where the aim is “to become crack division one sailors and be club boat of the year”. Harries reckons a resurgence in the South Australian racing scene is because of the investment in the under 40ft racing division. “It’s empire-building what’s happening there,” he teases.

Dates for Sail Port Stephens 2018 are set down for April 9-15, 2018 which is the week leading into the school holiday break.