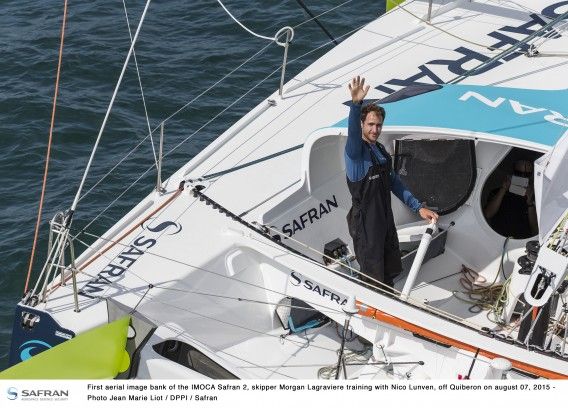 At 08:00 local time (14:00 in France) today (Wednesday) Morgan Lagravière got back on the road to Les Sables d'Olonne. Thanks to the work of his technical team, Lagravière is back in the race and is restarting just over 100 miles behind his next competitor.

The technical team worked around the clock on Safran. Morgan Lagravière docked in Newport on Monday night and his team immediately took charge of the boat to assess the damage suffered and begin repairs. It took more than 24 hours to get Safran back in a condition to cross the Atlantic safely.

“First, we had to remove the foil, which is now unusable,” Gérard Le Page, chairman of the Safran Sailing Team, said. “Then, the team completely cleaned the boat, because of the water that had leaked in. The foil’s shaft opening is well sealed with a carbon 'skin'. So, Morgan will sail without foils on a starboard tack (when the wind comes from the right side of the boat).”

Getting straight back on the horse

For Lagravière, resuming the race is essential. Firstly, because accumulating some racing miles after all the training sails has clear benefit. Also because, in a race, benchmarking performance is an excellent indicator of the level of preparation and maturity of the project.

“These are not ideal conditions to restart in, but we’ll deal with it,” Lagravière said on his way to the pontoon, about ten minutes before setting sail. “I have the four skippers at the back in my sights. As we all have boats that are sort of handicapped, there will almost be a race within the race. My collision was one of those ‘perils of the sea’ and it’s still in my head, but I’m hoping I’ll quickly find my calm out there. When you’re at the helm of such a great project, you have to live it to the full.”