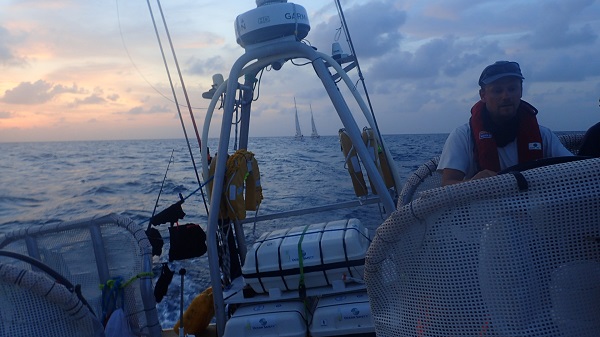 The teams are making good speeds close hauled in steady easterly Trade Winds in the first 24 hours into the LMAX Exchange – RACE of THE AMERICAS to New York.

After a Le Mans start at first light on Tuesday, the teams are headed on a straight course towards the Windward Passage which will lead the fleet out into the Atlantic Ocean.

ClipperTelemed+ is currently at the top of the leaderboard, with Derry~Londonderry~Doire just 1.45 NMs behind it, and LMAX Exchange under 2 nautical miles behind the Northern Irish entry.

Winds of between 15 and 18 knots are powering the fleet along with an average of 9.5 knots being made, with intermittent squalls keeping the teams on their toes. The first waypoint, Jamaica, is to the north west of the fleet around 170 nautical miles away.

Huw Fernie, Skipper of Visit Seattle, in sixth place, described his team’s start and the initial stages of the race.

“We did quite well off the start line being sandwiched between Derry~Londonderry~Doire and GREAT Britain who were both good sparring partners for speed off the line.

“Further back boats are choosing which side of the course they prefer, perhaps looking for current or a later windshift to sneak a few miles on each other.

“The next race mark is Jamaica, which should be to the west of us in just over a day. Then Cuba will be getting in the way and causing a bit of a problem for some of us and maybe we'll start to see a split in the fleet from then on. For now it's just a drag race,” Huw added.

Peter Thornton, Skipper of GREAT Britain, currently in eleventh, wrote about the classic Caribbean conditions in his blog today as he said: “We're away again. A mixed bag Le Mans start where we found ourselves trying to escape the dirty air of a few boats. After a while we created a bit of room and then started the catch up game. A bit low on the course for my liking, bearing in mind the forecast we have been working our way back up most of the afternoon and through the night.

“The sailing conditions however are classic Caribbean with a blue sea, pretty steady east trades around the Force 5 to 6 mark, cumulonimbus delivering a shower or two every now and then with an increase in wind to go with them. But then a good amount of sun in between! Oh and dolphins. Life is back to normal at a bouncy 45 degrees and mountain climbing to move around.

“Having said that, within 24 hours we will be in much lighter stuff off the coast of Haiti and hoping we can move in the right direction!” Peter added.

In three to four days’ time, the next tropical low starts just north of the Windward Passage before tracking north then north east along a trailing front, meaning the fleet will have some tricky winds to deal with as the Trade Winds are disturbed.

Will ClipperTelemed+ hold onto its lead? Stay tuned to the Race Viewer to follow the latest updates.