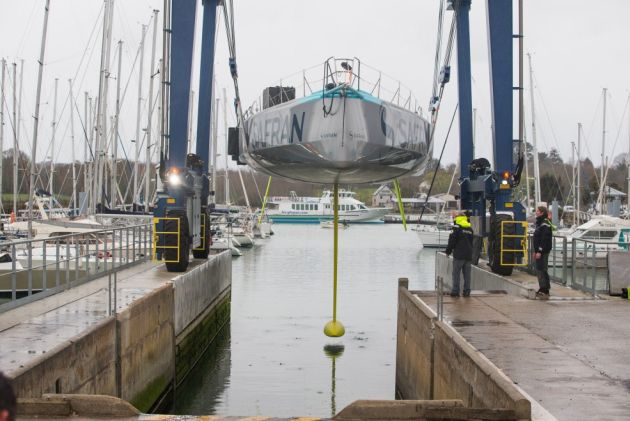 In the early hours of Wednesday, March 30, under some rain but with an obliging tide, Safran was launched back into the water in Port-la-Forêt. Soon after, the team set about stepping the wing mast, a tricky phase followed by adjusting the outriggers to allow the mast to work efficiently.

The hours of nose pressed to resin are over, now is the time for the spray of the sea and rigorous adjustments that will make Safran a racing machine to be reckoned with by the competition.

For Morgan Lagravière, Roland Jourdain and the Kairos team, a period of intensive sailing has begun. The stated objective – for Lagravière to accumulate experience, and to capture all the data that could improve the performance of the boat.

The skipper of Safran is eager to get started: “Above all I’m happy for the team, they’ve really given everything so that the boat could be launched on time,” Lagravière said. “We’ll be able to get out of the hands of the composites team and do some test sails. My goal remains the same: sail, sail and sail again. And to feel the team is with me is an extra source of motivation. There’s a human element to this group that convinces me that we can do great things.”

Roland Jourdain, who managed the whole process of the launch, agreed: “Morgan and I are in complete agreement on what needs to be done to be ready for the Vendée Globe. He has the talent, the drive, and the competitive spirit – all that remains is to construct the ecosystem. That's why it’s essential to be in harmony within the team and to have a common vision. Morgan must now learn about managing performance over three months of racing. Often in the Vendée Globe, your greatest opponent is yourself.”

Ready to sail in all conditions

Since Safran went back to the boatyard three months ago, March 30 was the deadline in everyone's head in order to allow Lagravière to keep to his training programme. This delivery date was possible thanks to the collaboration between the CDK boatyard, the architects VPLP – Verdier, and the Safran team.

Gérard Le Page, Chairman of the Safran Sailing Team, explained: “The work of the expert chosen jointly by the three stakeholders – the boatbuilder, the architects and the technical team – has reassured us about our analysis. The leak suffered during the Transat Jacques Vabre cannot be attributed to a single cause, but rather to a combination of several elements. The work consisted mainly in strengthening the structure of the hull with additional rails that have quartered the surface area of the carbon panels. The resistance to deformation has therefore been greatly increased. The goal is very clear: it’s imperative that Morgan has a boat in which he feels totally confident for the season ahead and for the Vendée Globe.”

Safran will make its first trip next weekend, before the non-stop IMOCA training at Port-la-Forêt begins from April 5. Between the different training periods on the programme, Lagravière still needs to complete a 1,500-mile sail to qualify the boat, before making a delivery at the start of May, destination New York: “We’ll rack up the miles. Luckily, that’s what we're here for!”

Programme
April: training and sailing
Early May: departure of the delivery to Newport (USA)
May 29: Start of the New York – Vendée Transat
Around June 6: finish in Les Sables d'Olonne
June-September: training and boatyard
November 6: Vendée Globe