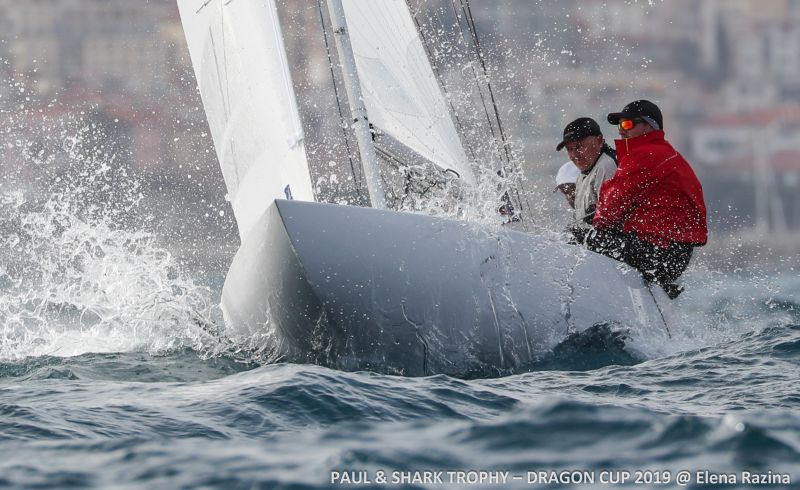 It was clear that the fight to take the Paul & Shark Trophy, International Dragon Cup, would be tough and decided down to the very last race for the teams aiming at the podium. Going into the last racing day the Russian crew of Bunker Prince, skippered by 470 gold medallist Yevgeni Braslavets and flying the flag of local Yacht Club Sanremo, looked almost unbeatable with their solid margin of 9 points, but the tricky conditions of the Ligurian Riviera reshuffled the cards. The final two races were raced with a light and shifty westerly that never exceeded 6 knots, putting to the test the dragonists’ ability and tactical skills.

Race 6 went to Blue Haze helmed by Ivan Bradbury, with Anatoly Loginov’s Annapurna in second, whilst Bunker Prince only managed to get a twelfth, their word result in the whole series. In the second race the win went to the team from Monaco Jeanie skippered by Jens Rathsack, with Blue Haze in second and Sweden’s High Times helmed by Karl Gustaf Lohr in third.

At the end of the seven-races series two teams emerged at the top tied at points: Ivan Bradbury’s Blue Haze with crew Lars Hendriksen and George Leonchek, and Russia’s Bunker Prince skippered by Yevgeni Braslavets with Sergey Pugachev and Sergey Timokhov, thatthanks to a higher number of wins grabbed the Paul & Shark Trophy 2019. Despite their consistent series the other Russian team on Annapurna, with veteran Anatoly Loginov and crew Vadim Statsenko and Alexander Shalagin, did not manage to further catch up and finished on the third step of the podium.

“We’re really happy with this result because the conditions were very tricky and the competition strong. It was exciting, in last two races there was a big fight for the Trophy. It was light , a bit choppy and shifty, we had a bit of everything. Today we had unusual condition for Sanremo. All the top team has some bad results before , during the week we were pretty consistent and today we made some mistakes too. Everyone can make mistakes so… but we kept focused and made it. I want to congratulate my team.” Declared Bunker Prince’s skipperYevgeni Braslavets. “We look forward to come back to Sanremo in October for the 90th Anniversary Regatta, it will be a great event, with a huge fleet, good racing and fun.”

Competition was intense also for the other first spots – prizes being awarded to the first five teams- with Germany’s Khaleesi led by female skipper Nicola Friesen with Vincent Hoesch and Frithjof Kleen, scoring two good results on the final day and taking fourth place, while Switzerland’s Sophie Racing with Hugo Stenberg, Bernardo Freitas and Martin Westerdahl finished the series in fifth.

Yanez with skipper Giuseppe Duca, Jean-Sébastien Ponce and Vittorio Zaoli racing for Compagnia della Vela di Venezia were the first Italian team and were also awarded with the national title on the best combined results in the Alassio Dragon Trophy and Paul & Shark Trophy.

“We’re happy with how the regatta went. We managed to get seven good races in, all technically tricky conditions, but as it often happens the best teams emerged. We now keep focusing on the 90th Anniversary Regatta, that promises to be something really different, I’m sure it will be an event to remember.” Said Beppe Zaoli, president of Yacht Club Sanremo.

The Paul & Shark Trophy is the first event of the season for the class in Sanremo, anticipating the Dragon 90th Anniversary Regatta planned for next October on the Ligurian Riviera, the event expected to be one of the top rendez-vous on a national and international level for the quality and number of teams taking part, so much that as of today more than 100 boats have already registered.

Full final results after seven races at this link