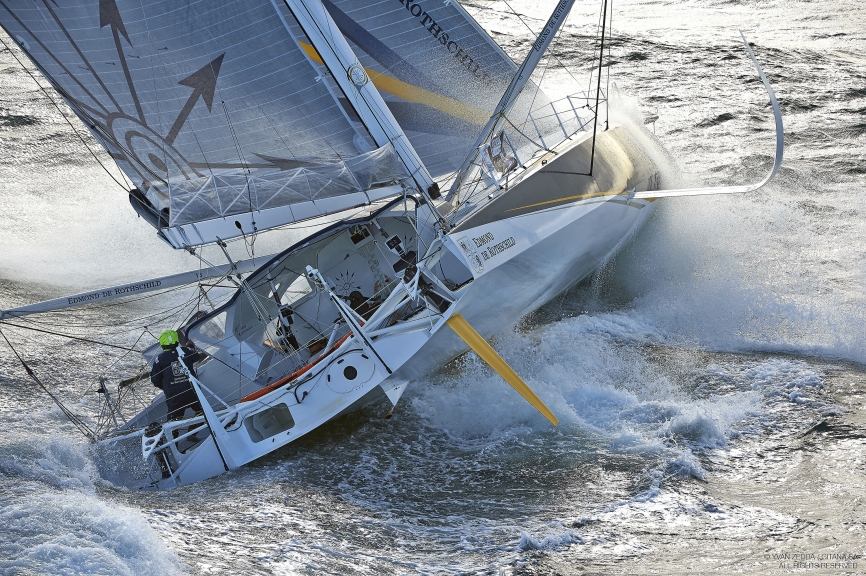 Yesterday evening, at 21:00 GMT, the final ranking of the day reinforced Sébastien Josse in second place. At that time, the solo sailor was 96 miles behind leader Alex Thomson and had a few miles on third placed Armel Le Cléac’h. The pace was still high and the top trio had no intention of easing up, instead doing their utmost to make full use of the weather situation on offer.

However, thirty minutes later, the skipper of the Mono60 Edmond de Rothschild contacted his shore crew. Whilst sailing in a NNW’ly breeze of between 25 and 30 knots and making headway at an equivalent speed, Gitana 16 hit a UFO (Unidentified Floating Object). The impact involved the starboard rudder of the 60-footer and the incident, which was inevitably violent at such speeds, damaged the appendage’s lifting system, preventing the appendage from slotting back into its housing in the lower position.

The breakage of the starboard foil on Hugo Boss at the weekend and, more recently, the Vincent Riou's retirement earlier in the day, serve as a timely reminder that collisions with UFOs, though they colour a sailor’s everyday life, are no less formidable for the gear and the machines, particularly when these happen at such high speeds.

Back on shore, a team made up of Pierre Tissier, Gitana Team’s technical director, David Boileau, boat captain for Gitana 16 and Armand de Jacquelot, a member of Gitana’s design office, got in contact with Sébastien Josse to offer him remote solutions to effect repairs and help him as best they could with putting these into practice.

After over four hours of forced stoppage the problem was resolved and with the Mono60 Edmond de Rothschild’s starboard rudder back in position and in operation, Sébastien Josse was finally able to continue on his way.

During this incident, the skipper of the five-arrow racing stable lost some hard-earned, precious miles. Indeed, it’s worth remembering that yesterday the top three competitors had managed to stay ahead of a front, which was accompanying the head of the fleet towards the Cape of Good Hope. This very smooth operation had enabled Sébastien Josse and his two fellow escapees – Hugo Boss and Banque Populaire VIII, to secure a good lead over their pursuers, the first of them, Safran having been relegated to nearly 300 miles behind the leader, whilst SMA, 5th, lamented a 462-mile deficit.

At the 04:00 GMT ranking, Edmond de Rothschild had logically yielded his 2nd place and is now some 169.4 miles astern of the British monohull. For all that, Sébastien Josse is back on the racetrack, which is a great satisfaction in itself.