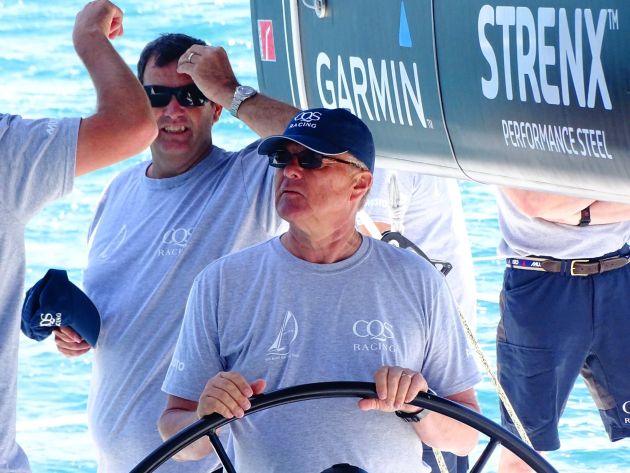 Ludde Ingvall at the helm of CQS. Photo - Julian Fuller.

Three big names of New Zealand yachting have signed up to join Ludde Ingvall’s super maxi CQS, and will be on the boat for its first competitive outing, the Round White Island Race, starting in Auckland on Friday (25th) morning. Chris Dickson, Chris Main and Rodney Keenan will be the three watch captains on the boat for this race and the Rolex Sydney to Hobart, starting on Boxing Day.

Chris Dickson, a trail-blazer of the current era of professional sailors, made his name in the eighties and nineties, mostly on the match racing circuit, before leading several America’s Cup challenges, and contesting round the world races and the maxi circuit. Commenting on the cutting edge CQS he said, “A 100 foot slippery maxi is always fun, it’s a very technical boat, as they all are these days. We’ve got a good team of guys to sail the boat, and a great team of guys putting the boat together.”

Rodney Keenan is the head of Evolution Sails in Auckland, and has a long and varied history of highly competitive sailing, ranging from multi-hull round the world challenges to America’s Cups. He has 17 Rolex Sydney Hobarts under his belt, plus Fastnet, Transpacs and a host of other major offshore races.

Chris Main is another Kiwi sailing legend, and is still active on the World Match Racing Tour, as well as being in demand as a tactician on a number of monohull grand prix circuits.

Ludde Ingvall, who has won the Rolex Sydney Hobart race twice before commented, “I am extremely excited that after two years of planning and more than a year of building, we are about to compete in our first race. I am proud to be leading a team of such experience and talent.

“The yacht is a true learning curve for the team and we have much to learn and to do to get the most out of her,” he added, then referring to his main sponsor, Ludde added “My only regret is that my cousin Sir Michael Hintze is not with us this time.”

The White Island race, around an active volcano, is a 320 nautical mile offshore race organised by the Royal Akarana Yacht Club. From a 10:00 am start on Auckland’s Waitemata Harbour, it takes the fleet south to the Bay of Plenty, around White Island, and back to Auckland.

This is also a qualifying event for the Rolex Sydney Hobart race, though being the first competitive outing for CQS, it is being regarded more as an opportunity to learn about the boat than a measure of performance.