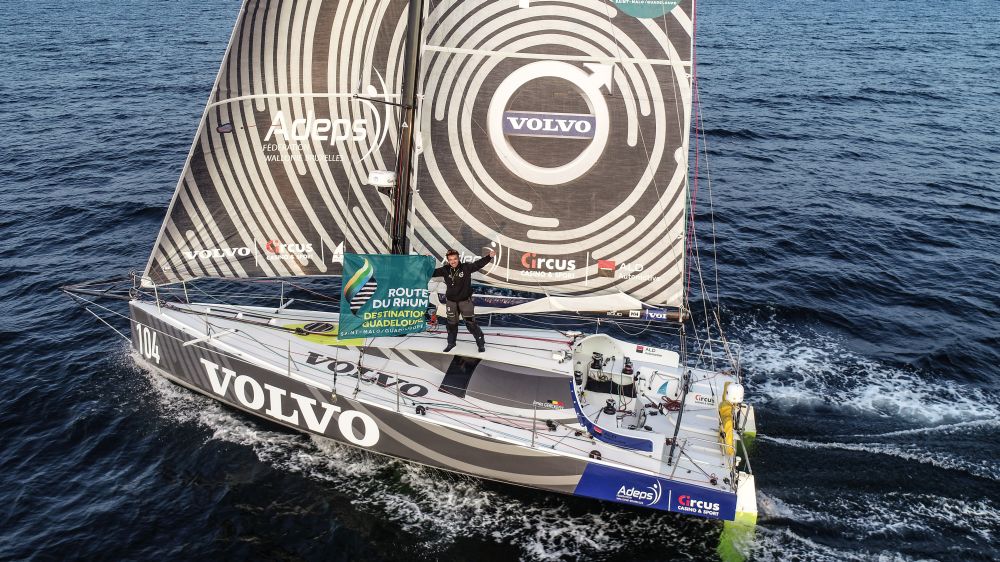 The largest fleet in the Route du Rhum-Destination Guadeloupe 2018 – the solo transatlantic race that starts from St Malo on November 4th – is the Class40 monohull division with 53 sailors taking part.

This record entry, that makes up almost half the total 123-strong fleet in this four-yearly classic, includes men and women from 10 nations sailing a variety of boats designed within the parameters of what has become an extremely successful class rule.

The Class40 record for the 3,542-nautical mile course to Guadeloupe in the French Caribbean was set by the Spanish yachtsman Alex Pella with a time of 16 days, 17 hours and 47 minutes in 2014. The best in the class this time will be looking to challenge that, though only the very latest designs sailed by experienced solo ocean racers are likely to do so.

With the exception of the Mini-Transat – a solo transatlantic race sailed in smaller boats – no single ocean race has seen so many entries in one class as this Class 40 fleet for this, the eleventh staging and 40th anniversary edition of the Route du Rhum-Destination Guadeloupe.

Class40s have been taking part in the four-yearly Route du Rhum-Destination Guadeloupe since 2006 when Britain’s Phil Sharp won the division in a time of 18 days, 10 hours. But since then advances in design have seen this course record come down by a day in each subsequent race. In 2010 Frenchman Thomas Ruyant reached Point-a-Pitre in Guadeloupe after 17days and 23 hours, while Alex Pella took another day off that in 2014.

Of course, the weather conditions in the English Channel, the Bay of Biscay and the north Atlantic in the days immediately after the start will have a significant impact on race time. But it is clear from recent races that the newest boats in the class are capable of going quicker still with daily distances of over 350 nautical miles now possible – quite something for 40-foot monohulls.

This reflects the increasingly radical design profiles of the newest boats which, despite conforming to class rules limiting sail area, displacement and draft (three metres), are looking more and more like the fastest IMOCA class boats – the 60-footers that race in the Vendée Globe solo round-the-world race.

Within this category at the head of the fleet are 15 skipper-boat combinations that are performing closer and closer to the 60s, even without the use foils or canting keels which are not permitted in the class rule. At the head of this group is the British sailor, Phil Sharp (Imerys Clean Energy) who not only won in 2006, but with his two-year-old Manuard-designed boat has been regularly on the podium and winning races including the Round Britain Race and the Normandy Channel Race.

Alongside him are two French sailors in brand new – and formidable-looking – Lombard designs: Louis Duc (Carac) and Yoann Richomme (Veedol). They are both highly experienced and their big and powerful hulls make them among the favourites to reach Guadeloupe first.

Then there is a group also sailing Samuel Manuard designs who will be contenders that include Nicolas Troussel (Corum), Maxime Sorel (V & B), Arthur Le Vaillant (Leyton France), Luke Berry (Lamotte-Module Creation) and Aymeric Chapellier (Aina-Childhood and Future). Other boats to watch out for will be those from the board of Guillaume Verdier ​​sailed by the likes of Kito de Pavant (Made in Midi) or Antoine Carpentier (Custo Pol). In short, this is going to be an extremely competitive division in which sailors in closely-matched boats will fight it out, hour-by-hour across the Atlantic.

Here are the thoughts of Emmanuel Le Roch who will sail Edenred: “Since I was a child, I wanted to participate in the Route du Rhum-Destination Guadeloupe. I nearly did it in 2006 in a multihull but then, a year ago, I had the opportunity to buy a Class40, a division where there is good competition for a reasonable budget. I got hold of a boat in good condition based in La Trinité where I work in a boat rental company. This is a 2010-vintage Pogo S2 that took part in the Rhum with Damien Grimont in 2014. Of course, I have no chances to actually win but I want to get to the other side with a decent performance. I have already done more than 5,000 miles at sea on Edenred and I have done quite a lot of solo sailing … “