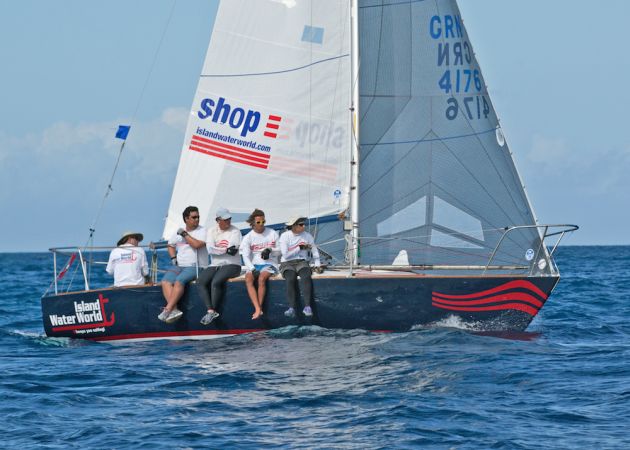 Bridgetown, Barbados (19 January, 2016): The final day of the Coastal Series at the 80th anniversary Mount Gay Round Barbados Regatta, organised by Barbados Cruising Club in association with Barbados Tourism Marketing Inc, and Mount Gay, concluded in fine style today with sunshine, wind up to 28kts, and a relatively flat sea. The ultra fast flying machines in particular, including the multihulls, reveled in the conditions along the south coast of the island with a long beat out to Oistins and a rewarding blast back home.

In Carlisle Bay, where winds remained around 18-20kts, the J/24 fleet enjoyed yet more close battles in the final four races of the series. With Robbie Yearwood and team on Island Water World Die Hard from Grenada, and Neil Burke and team on Impulse equal on points going into the final day’s racing, competition was guaranteed to be intense.

The situation looked good for Burke and team on Impulse with two wins in the bag after the first two races, while Yearwood and Team Island Water World Die Hard suffered with a couple of penalties, which left them having to count a third and a fourth. Living up to their name, however, Team Die Hard fought back and won the final two races, which left them snatching the title from Impulse by just one point.

Commenting on the team’s impressive win Robbie Yearwood said: “Absolutely delighted. After the first two races today we had a bit of a conference, settled down, put the past behind us, did what we had to do and focus on moving on. Thankfully it paid off.”

Peter Lewis and team on Whistler (J/105) in CSA Division had one of the best starts of the day, at the pin end of the line. They kept up the pace on the long beat to South Point and some good kite trimming on the long run back ensured them their third win of the series. In doing so they beat Conviction the local TP52 sailed by Clint Brooks and team representing the Barbados Offshore Sailing Syndicate (BOSS). Brooks commented. “Three days in, Paul Johnson at the helm, and the team of young sailors aged between 14-17 years olds are really starting to sail well, but just couldn’t quite beat Whistler on corrected time.”

Ian Hickling and crew on his Catalina – Ten Seven – enjoyed their best race of the series today in CSA Cruising Class. Although they were unable to dislodge David Spieler and team’s overall win on the Beneteau Oceanis 473 – Leonora – they won today’s race in fine style.

Priscilla Richardson and team on Tropic Bird (Hunter 35) scored another win in Non CSA (Local Rating) class today to secure first place overall in the series. Mark Mostovac’s Jeanneau Attalia 32 – Waymar – finished fourth today but it was still enough to retain second place. However, one of the most impressive performances in class was Team Shangri La (Morgan 41) sailed by Jonathan Gittens and team. They had a good start in the building breeze and continued to sail well throughout and finished the day with a well-deserved second place, and third overall in series.

Some of the most exciting racing this week was in the Multihull Class between Bryn Palmer and team on the RC30 catamaran Silver Bullet, and Team Concise 12 on the Diam 24 trimaran. With one win apiece, the stage was set for the final showdown today. Both teams were fully charged ready to go but it was obvious from the start that Jack Trigger, Rob Gullan, and Helena Darvelid on Concise 12 had the edge in today’s conditions. They were able to really crank up their super-powerful machine and pull out a respectable lead over Team Silver Bullet. A long spinnaker run in clear air back from South Point was all Team Concise 12 needed to secure the overall win of the Coastal Series.

Trigger commented: “I think we just found another gear today and everything felt good. We got away on the start line and that was it. But I have to say, having Silver Bullet to race against was great because that first race in particular, that they won, was so close.

“The goal was to come out here and win so, as a team we are very happy indeed. We are not yet sure if we are competing in the round Barbados Race. We just need to monitor the conditions before we make a decision.”

After three days of intense racing and lay day tomorrow, crews are making the most of the local hospitality tonight at the Post Race party at Barbados Yacht Club. Lay day activities tomorrow include a Mount Gay Rum distillery tour at Brandons in the morning, and a specially laid on regatta exhibition polo match and party at Holders Polo Field, St James in the afternoon.