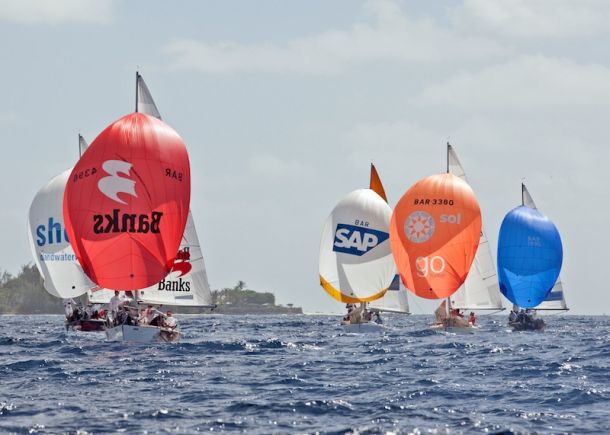 Bridgetown, Barbados (17 January, 2015): Competitors were treated stunning conditions on the opening day of the Mount Gay Round Barbados Race Series 2015 with winds up to 20kts generally from the east-north east, and big rolling waves.

This regatta, which runs until 24 January, is organised by Barbados Cruising Club in association with Barbados Tourism Marketing Incorporated, and Mount Gay. It is the first regatta of the Caribbean race season and is fast becoming a favourite with both cruising and racing sailors looking for good, competitive, fun racing in consistent breezes.

Class racing in the J/24 fleet today was closer than ever with the locals demonstrating their impressive racing skills throughout the day. Three relatively short windward/leeward races, which kept the fleet extremely close, were held in Carlisle Bay and Robert Povey and team on Hawkeye won all three races in extremely tough, shifty conditions.

An interesting start to the first J/24 race saw Peter Armstrong and team on Shakin take a flyer off to the right-hand side of the course and lead the fleet round the windward mark after picking up a favourable lift. They sailed well and maintained their position until the second beat but were unable to hold off Team Hawkeye and eventually had to settle for eighth in that race, and overall.

Povey, who won the regatta in 2013, and finished third last year knows only too well how tough it is to win this event. Chatting after the racing, Povey commented: “To get three firsts in such a competitive fleet was very tough particularly in the shifty winds. It was definitely not a day to bang the corners. Succeeding today came down to quick decisions and good crew work and I think our results proved we did a good job.”

Another impressive team was College Funds sailed by Jason Tindale and team who finished the day with a consistent scoring of 2,3,3. Tindale is a young, talented Laser sailor who knows the conditions well, which means he is likely to remain at the top of the fleet over the next few days.

One of smartest, chic-looking boats on the water today was the local TP52 Conviction sailed by Paul Johnson, Clint Brooks and team representing the Barbados Offshore Sailing Syndicate (BOSS), a local project that promotes youth in sailing. This well turned-out team worked hard within CSA Racing class and, although they could manage no more than fourth today, they were exceptionally pleased with their performance.

Clint Brooks skipper of Conviction said: “Today was all about confidence building and practice for our young team. The youngest member of the team is just 13 years old, and they have all progressed from the local dinghy programme. The idea is to use the three days of coastal racing to really prepare for the Mount Gay Rum Round the Island Race on Wednesday. As the skipper I am extremely pleased with today’s performance because it was the young team’s first real, big regatta.”

Had there been a prize for perseverance, Peter Lewis and team on Whistler (J/105) would have snapped it up for managing to hold the spinnaker for the entire eight-nautical mile west coast leg on an extremely tight reach. Although they had to settle for second overall in CSA Racing class, they were delighted with their performance.

Lewis celebrating the team’s success at the Mount Gay Rum Red Cap party at Barbados Yacht Club tonight, said: “We managed it because we had a very flat spinnaker and the wind was in the right position, and the team sailed the boat well, so it was easy. We actually gybed it round the mark and brought it most of the way back too.”

The winner of CSA Racing however was the British charter Beneteau First 40 – Lancelot II from Southampton, sailed by Chris Jackson and a team from Slovakia. Commenting as he stepped ashore Jackson, tactician, said: “Great day, but tricky and the crew really worked hard which is why we did so well. Thankfully they all speak English so communication is good.”

The CSA Cruising class with just three boats produced some close fought competition today. After a short windward/leeward in Carlisle Bay, the course took the fleet along the west coast, which gave Mike Krimholtz’s and his team on Dragon Magic (Dufour) and David Spieler’s Leonora (Beneteau Oceanis 473) time to engage in a good battle. Team Leonora eventually took the first race win but Krimholtz and the Dragon Magic team are planning to be on form in the morning to challenge for the top spot.

Non-CSA class is well supported with a total of eight boats battling it out. Today the fleet, like most of the other classes, enjoyed a west coast course but for most, the leg was just too shy to fly a kite. Mandy (Hunter 30) sailed by Bruce Robinson and team from Barbados, managed to achieve a first race win leaving fellow Barbadian, Jonathan Gittens and his team on Shangri’La (Morgan 41) in second place overall.

The multihull/mixed dinghy/windsurfer fleet was won by local windsurfing hot-shot Charles Hunt who managed to keep the Hobie 21 Buccaroo Too, sailed by Thomas Atwell, at bay.

Tomorrow’s forecast shows similar conditions although the pressure is likely to build on the south coast and this, combined with a 2kt current, means for classes such as the J/24s the racing will be challenging.