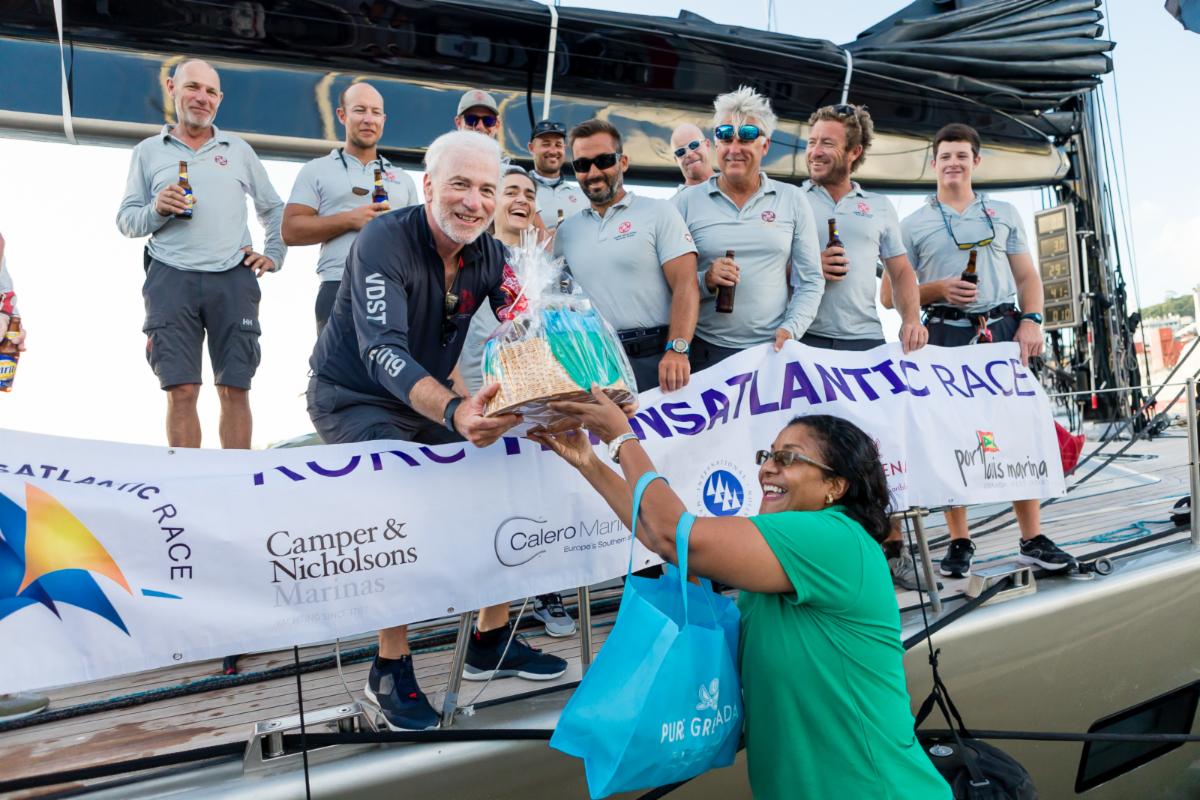 “I did the Transat almost 12 years ago with almost the same team. This time it was great; we had tricky winds and still enjoyed it,” Auberton-Herve commented.

“Racing with the RORC means great organisation at the departure and a great reception here. The Transat was perfect, we loved it – Dark Shadow was flying. We reached 25 knots finally and that was very nice. It was great to put the team back together.”

Pata Negra's blog gives an insight into life on board: “Last night and today's sailing has been littered with cloud activity, and therefore a lot of quick gybes. We're pretty confident we can maximise potential of each, and have managed to be on the headed gybe most of the time.

“This is particularly tough, as shifts can last from anywhere between 10 seconds to an hour. Squalls blow through with some clouds, hitting 37 knots at one point. Will capitalised on that and set a new speed record of 20.9 knots, verified by the shrill scream of Cat, who previously held it.

“We're constantly trying to aim as close to Grenada as possible, while still making good speed. With the first finisher of the race, Childhood 1, pulling in just before midnight on 4 December, the math is soon to start as to what exactly we need to do to secure each position.

“These are only estimations, and everything is still to play for, especially with these squalls and clouds. For now we will continue to look up at clouds, duck from flying fish trying to attack us, and dream of the rum cocktails. Roll on Grenada!”

More than 200 miles astern of Pata Negra is Richard Palmer's British JPK 10.10, Jangada, which Palmer is racing two-handed with Jeremy Waitt. Jangada is estimated to be leading the race overall after IRC time correction, but still has approximately three days at sea at their current speed.

Benedikt Clauberg's Swiss First 47.7, Kali, is 770nm in the deep blue Atlantic Ocean. The team was celebrating on board Friday. Having a bit of Christmas fun, the Swiss love to celebrate the feast of St Nicholas with gifts of chocolates, as well as having a bit of a Caribbean style boogie.

“We are in a good mood and eating like kings,” Clauberg said. “Three Mahi Mahi caught and we have prepared some delicious dishes. Fresh bread and Sunday braid (Sonntagszopf) from Hampi's bakery enjoyed.

“Hopeful sunrises and wistful sunsets experienced. We have seen about 1,000 shooting stars and made wishes. We observed a dolphin family, pilot whales and flying fish. Oh yes, it is also a race.

“Unfortunately, a calm has cost us some time, but now we are back with good speeds again. Grenada, here we come! We are looking forward to the second half.”