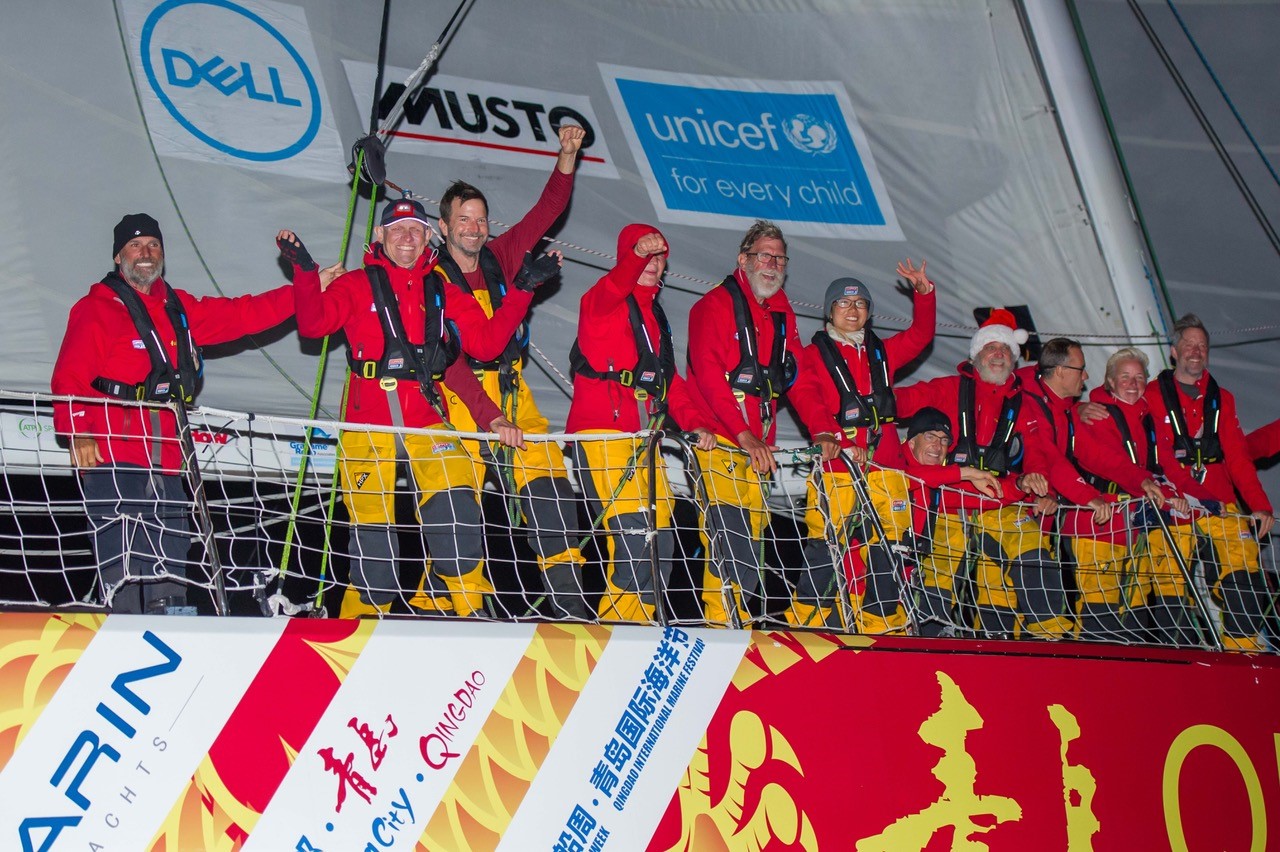 After a three-week game of cat and mouse across the Southern Ocean, between the two leading Clipper Race teams, it was Qingdao which clinched a narrow victory. The team, flying the flag for China’s sailing city, pipped closest rival Ha Long Bay, Viet Nam to the finish line in Fremantle, Australia, crossing the finish line at 18:41:35 UTC on 7 December.

Talking of Race 4: The Marlow Southern Ocean Sleigh Ride, Skipper Chris Brooks said: “It’s been an epic journey. Above anything else the weather has been challenging, just keeping positive when there is nothing but rain and grey skies. But it’s been amazing, so brilliant to come in first.”

Qingdao Major International Sailing Events (Festivals) Organizing Committee said: “Congratulations to Qingdao, Skipper Chris and all the crew on continuing the lead in overall standings throughout Race 4. We wish you enjoyable times in the following races and keep up the great performance!”

Over 200 everyday people from all over the globe have been racing each other over 4,750 nautical miles across the mighty Southern Ocean from Cape Town, South Africa, to Fremantle, Western Australia in a race.

Racing non-stop around the clock, the eleven teams, racing identical yachts, faced wind speeds of over 50mph (80km/h), freezing cold temperatures and waves as tall as apartment blocks in their bid to win the third stage of Clipper Round the World Yacht Race, the toughest endurance challenge on the planet.

In the final days of their race, the frontrunners Qingdao and Ha Long Bay Viet Nam, hunkered down to play their last strategic moves around incoming weather systems. Crossing the finish line just a little over an hour behind Qingdao, Ha Long Bay, Viet Nam claimed a well-earnt second place on the Race 4 podium, crossing the line at 19:54:07 UTC.

Upon arrival, Skipper Josh Stickland said: “We said at the beginning we’d head east, we stayed with the pressure and fronts and it paid off. Well done to Qingdao and Imagine your Korea. They pushed us, we all pushed each other through the whole race. I have a great team to be with. Overall, it was a great race.”

Pham Ngoc Thuy, Director of Quang Ninh Department of Tourism (Viet Nam) enthused: “Congratulations on the success of the Ha Long Bay, Viet Nam! The journey of the racing team was full of challenges, but you did really well. The old year is coming to an end, the New Year is beginning, on this occasion, we wish you a Merry Christmas and a Happy New Year for 2020!”

The race for the final podium spot went to Imagine your Korea which, under the lead of Clipper Race Skipper Dan Smith, enjoyed its first podium result of the 40,000 mile circumnavigation so far.

Celebrating this milestone for the team, Han Kim, International Director for Korean Sailing Federation, praised the team saying: “I am very proud of the Imagine your Korea team in its fantastic work during this leg. Having done the race personally, I know the challenges crew had to face for this leg. I recall even our skipper being shaken in the face of the infamous Southern Ocean. I hope the enjoyments and challenges will bond the team stronger and make them into the sailors they deserve to be. As they say, smooth seas do not make a sailor. Congratulations and I hope you are all happy with your results!”

The race for remaining positions is still well and truly on, with every point helping to increase the teams’ overall leaderboard rank.