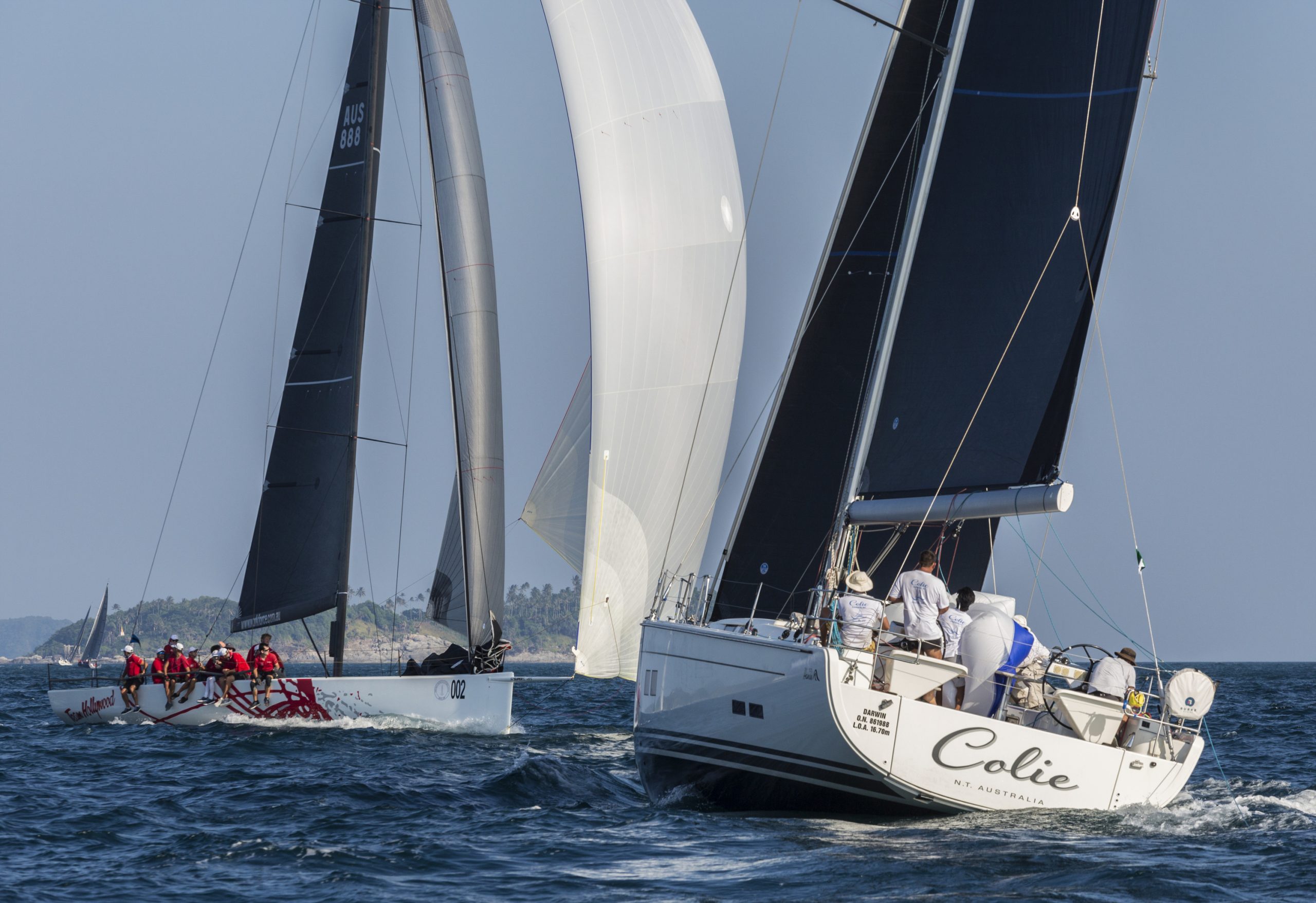 Unlike many previous years, when the organisers prayed for a breeze, there was too much wind for many of the boats, as the fleet contesting the 33rd Phuket King’s Cup Regatta prepared to race on Friday morning.

Only five of the nine classes were able to do any racing on Friday. The wind gusted from 30 to 35 knots during the morning off the southern end of the resort island, but eased slightly to allow for one race to be held late in the afternoon.

“We had winds gusting from 30 to 35 knots during the morning. Safety is the number one issue, so we had to cancel some of the racing,” said Race Officer Simon James.

When racing did eventually start, defending champion, Australian Ray Roberts on Team Hollywood, had a narrow win for the overall lead in the top flight IRC Zero class. Roberts edged out Thailand’s former world Optimist champion and two-time Asian Games gold medalist, Noppakao Poonpaton, who was at the helm of the Thai-registered boat THA 72.

Russia’s Alexey Mashkin extended his overall lead in the IRC 1 class with a second place on his boat MegaZip, followed by Japan’s Kazuki Kihara on Char Chan, which won Friday’s race. In third place was another Japanese skipper, Nanamori Yasuo, on Emagine.

The overall lead in the Premier class was held by Peter Cremers from Australia on Shahtoosh. Fellow Aussie Geoff Hill was second overall on Antipodes, followed by Thailand’s Ithinai Yingsiri on Pine-Pacific.

Only two boats contested the Firefly 850 Racing class on Friday, the last of the classes racing on Friday, and despite a second place finish, Great Britain’s John Newnham’s Twin Sharks still has a narrow overall lead. Hot on his heels is Hans Rahmann on Voodoo.

The strong wind also caused some problems for the International Dinghy Fleet sailing off Kata Beach, with the Royal Thai Navy’s inflatable boats as well as some of the boats from the main fleet coming to lend a hand and towing some dinghies to shore. However, in the afternoon the wind dropped and racing was resumed.

At the end of a windy day, experienced sailor M.L. Weka Bhanubandh led the boys’ Optimist class, with Thorfun Boonak in front in the girls’ Optimists.

The testing conditions were also noted by the large contingent of Chinese media, most of whom were drenched as they made they was across the windy, choppy sea on small inflatable boats to the Royal Thai Navy battleship anchored offshore, which has become the media center on the water.

Friday’s racing was sponsored by the Belt and Road Regatta, which will be held in Beihai, China, on December 13, and a large number of Chinese media are in Phuket.

It will be the first regatta in China named after the Belt and Road Initiative, China’s global infrastructure project, with the aim of enhancing friendship and communications between China and Southeast Asian countries via the sport of sailing.

In the IOM class for radio-controlled boats, Thailand’s Vanaran Yusananda shot to the overall lead after four races held on the south of Phuket. Vanaran is one of 14 Thais testing his skills as a radio sailor and jumped from fourth place on Thursday to the lead on Friday.

Maintaining his second placing on Friday was China’s Yan Jiangiun, who held the same position after Thursday’s races. Australian Tim Brown was also consistent and kept his third position on Friday. A total of 24 radio sailors are racing, the first time the class has been included in the Phuket King’s Cup Regatta.