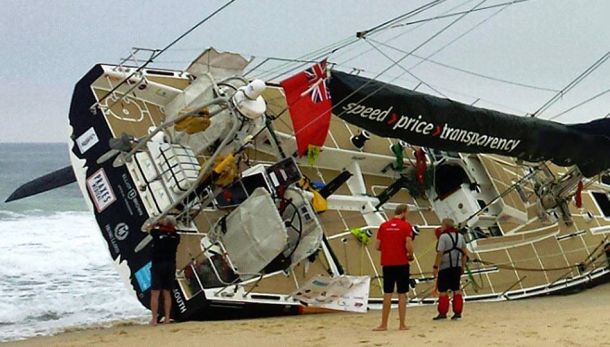 The winner of the first leg of the Clipper Race, LMAX Exchange has run aground 42 miles southwest of Marina da Gloria, in Rio de Janeiro while transitting to another marina to have new hull branding applied.

Clipper Race founder Sir Robin Knox-Johnston said: “The hull is intact and the boat is secured by its anchor. We will remain on site to await the arrival of heavier equipment to get her off.”

However, such activities don't always go to plan. Another Clipper boat, Qingdao, was being used to help in the salvage when a line wrapped around her propellor. With her engine not operating, she was also washed onto the sand. Qingdao was subsequently re-floated, but now also needed to be repaired, so the decision was taken for the tug to take her to the marina at Verolme, Angra Dos Reis, first, and return to re-float LMAX Exchange the next day.

On October 4, LMAX Exchange was successfully re-floated, and towed to the same marina where she is being assessed, lifted and repaired.

There has been no official word on how LMAX Exchange went aground. Clipper officials said it was not due to equipment error, and that the skipper Olivier Cardin will continue to lead his team.

The next leg from Rio de Janeiro, Brazil to Cape Town, South Africa starts on October 7.