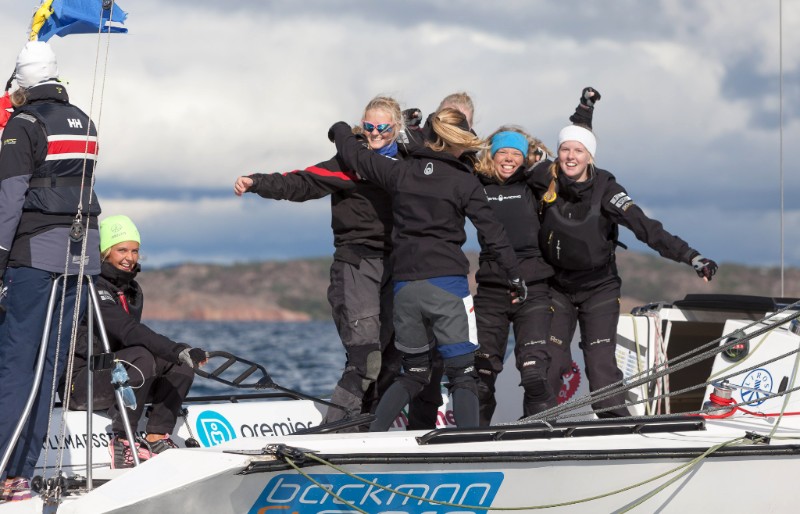 Wednesday at lunchtime the racing at Lysekil Women’s Match, the 2nd event on the 2016 WIM Series, finally got going on the Swedish west coast.

Halfway into the round-robin, local hope Anna Östling is the undefeated leader. But her fellow club member of the Royal Gothenburg Yacht Club, the rookie Johanna Bergqvist, totally stole the show on the water, by beating World #1 and five time Lysekil winner, Camilla Ulrikkeholm Klinkby, DEN: “everything fell into place in that match. We felt completely euphoric and were actually a bit shocked”

Bergqvist cheered, almost as if they had won the whole event. With her 19 years, Swede Johanna Bergqvist is the youngest skipper in Lysekil Women’s Match. In her Team X, the oldest crewmember is 22. All have dinghy background, and all are beginners in match racing since just a year or so. Then they were ranked #117 in the world, participating in Lysekil Women’s Match through a wildcard. This year they have indeed climbed to #30 on the world ranking, but they still needed a wildcard to sneak into the Lysekil event as the lowest ranked crew.

34 years old Camilla Ulrikkeholm Klinkby and her team have dominated the international match racing scene for the last few years, always at the top of the world ranking, becoming the 2014 WIM Series champions and with no less than five consecutive triumphs in Lysekil Women’s Match. On paper they should easily beat Bergqvist & Co. but today was a different story. The nearby crowds on the Lysekil cliffs could easily follow the dynamic and exciting battle between the Dane and the Swede, clearly showing that nothing can be taken for granted in this especially exciting sailing discipline.”

Being a little too hot and manoeuvring a little too tight against the Danes already in the prestart, Bergqvist was penalised for that. When Ulrikkeholm Klinkby then took the start and went out on the first beat leading quite comfortably, it didn’t look too good from a Swedish point of view. But at the end of the first downwind the Swedes managed to get ahead, rounding the bottom mark with a narrow lead over their competitors. Being first to get more pressure on the left hand side of the course, they were able to stretch their lead enough to barely do their penalty turn just before the finish line. Wild cheering broke out aboard: “it was a new experience for us to clear a penalty on the finish line and then win the match, We’ve never been able to do that before” Bergqvist laughs.

“They sailed very well and deserved to win that race. We have to be more sharp to take it all the way” Camilla Ulrikkeholm Klinkby comments.

Halfway into the round-robin Swede Anna Östling is leading on a 5 – 0 score, while Camilla Ulrikkeholm Klinkby shares the runner-up position with Stephanie Roble, USA, on three wins and one loss: “we are happy we went sailing today, to get settled into the boat. We had some good learning moments and are looking forward to the future matches. I’m really proud of my crew and how we came together” says Roble.

The round-robin of the Lysekil Women’s Match continues Thursday. The event will conclude Saturday with semis and final.