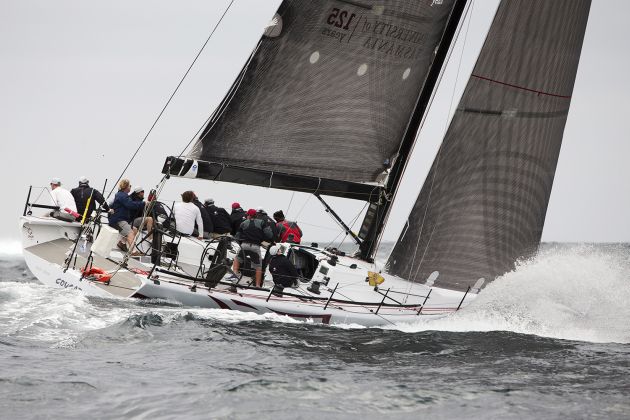 Will Matt Allen race his new TP52 Ichi Ban to Hobart or will he opt to stick with his sleek black hulled Carkeek 60 of the same name?  The skippers of nine other TP52s entered in the Rolex Sydney Hobart have a keen interest in the answer.

At the Cruising Yacht Club of Australia, the two Ichi Bans are being meticulously prepared for the 628 nautical mile epic.

“Both boats are ready to go. We haven’t made up our minds yet,” Allen says. It will depend on how the weather models stack up in the days leading up to Boxing Day.  A bit like a trainer who can saddle up his choice of thoroughbreds depending on how heavy the track is.

If he opts for the TP52 it will be good news for the others in so far as one of the race’s canniest sailors has determined that this year will favour the mid-sized grand prix yachts over their bigger rivals. The bad news is they will have to beat Ichi Ban.

“When I bought this boat (the former Shogan V) I felt she had been incredibly dominant downwind and two-sail reaching, but we needed to turbo charge her upwind. We put in a bigger mast, bigger sails and deeper keel.”  Ergo, this is a very fast TP52 indeed.

“It will be tougher this year with Ichi Ban,” says Andy Kearnan, who with Peter Wrigley bought the successful European TP52 Lucky this year, renaming her Koa, Hawaiian for ‘strong’.  Koa first raced in 2004.

“It’s difficult to compete against the newer generation, bigger budget TP52s but the IRC system does allow an older boat to stay competitive,” says Kearnan.

The TP52’s in the race are from different eras and built for different purposes – some for regattas, others for the European circuit and the rest for ocean races.

“Cougar II was built in 2005,” says skipper Anthony Lyall. “We‘ll never go as fast as the lighter boats, but they weren’t built for offshore racing.  And anyway, you’ve got to get there to win it.”

While Allen concedes: “The issue for us is the structure isn’t designed for the really heavy seaway you can get off the NSW coast. We have strengthened Ichi Ban a little bit, but when it’s wind against current, a lot of boats and crew have been found wanting.

“It isn’t so much about the wind strength as the waves. You have to be able to push your boat hard all the time to win this race. We’ll have to be very confident about the forecast to take the TP52.”

TP52s are one-off yachts designed to a ‘box rule’; that is, each boat has to fit into the dimensions of a box, as it were. Length, displacement, draft and sail area are defined, but hull shape, construction, deck and interior layout are at the designer’s whim.

“They rate very well on IRC,” Anthony Lyall explains, “and rating is vital if you actually want to win races,” he ends.

“Koa is 10 years old, but we can still be competitive against modern machines like the Kers and the Carkeeks,” Andy Kearnan says. “It says a lot about the class and how these boats were designed.

“The first time I sailed Koa we brought her from Southport to Sydney,” Kearnan adds. “We did 400 miles in 37 hours. We weren’t pushing, but we were regularly north of 15 knots, sometimes over 20.”

“They’re very technical,” says Sam Haynes of his Celestial. “There are lots of ways to make the boat go fast, and not fast. Tuning the rig makes a big difference.  You can feel when she is alive and in tune and when she is not.”

“Two sail reaching they take off,” says Anthony Lyall, “but you have to sail to your targets all the time, and it takes a few years to learn how to do this. We haven’t learned all the subtleties of the crossovers from reaching and upwind, and just what some of the sails can really do.  Which sails to take and which to leave behind. In a couple of years’ time we’ll be much further down the track.”

“They are very controlled, but they can wipe out spectacularly,” laughs Sam Hayes.  “They are built to very tight tolerances. Everything is critically engineered, so if you overload it, it will break.”

“We led Balance most of the race, then we fell over doing a spinnaker gybe at 20 knots.  For 20 minutes we sailed backwards at 8 knots with the spinnaker wrapped around the back of the boat. Turns out these boats are fast in every direction.”