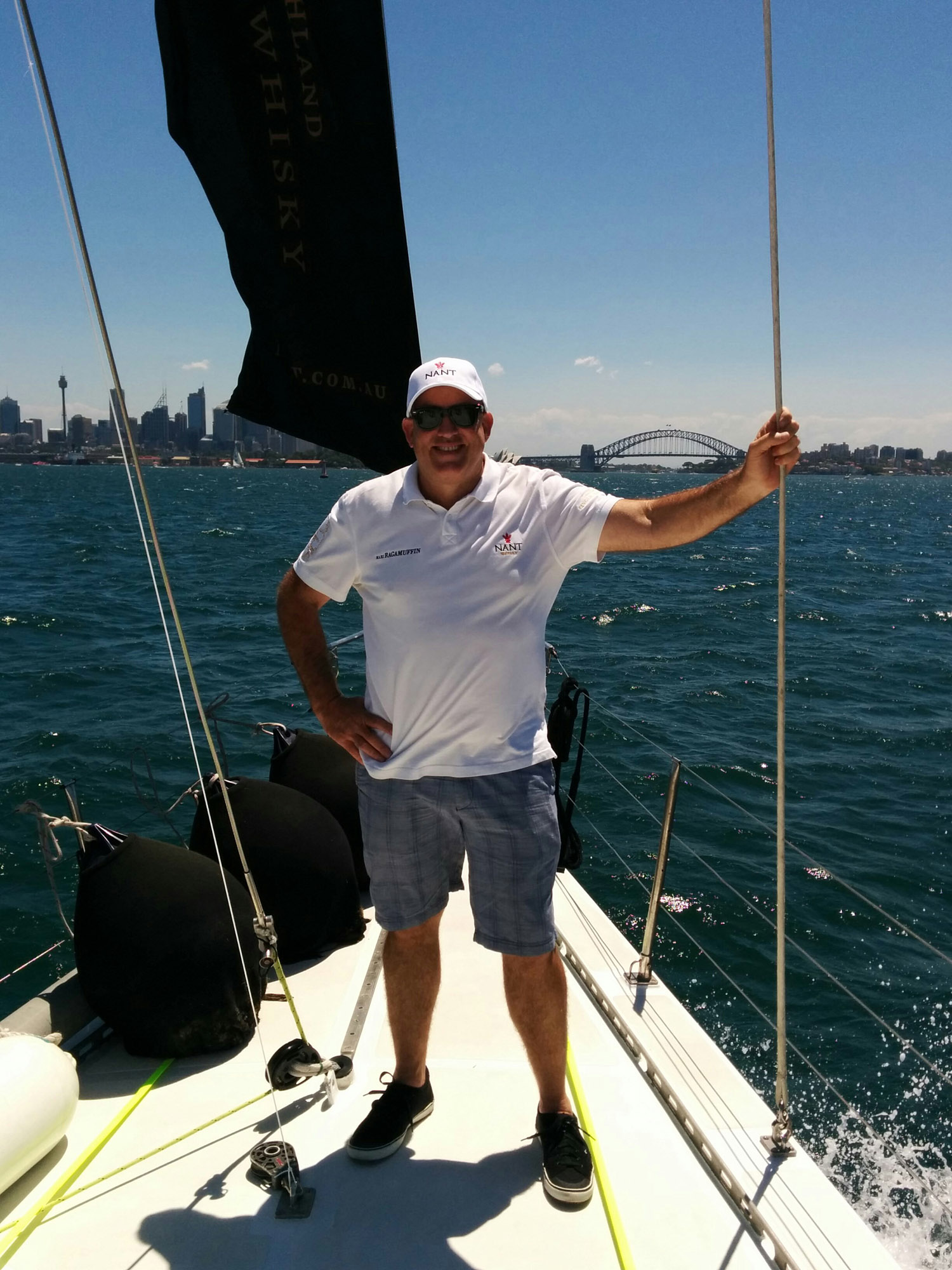 She was one of the greatest maxi yachts of her day; winning line honours three times, first as Bumblebee IV in 1979, and then as Ragamuffin in 1988 and 1990 and she last raced to Hobart in 1993.

For the last 20 years she has been thrilling charterers in Queensland, but in 2015, Maxi Ragamuffin has been painstakingly brought back to full racing trim. On Boxing Day spectators can marvel again as the 36 year-old German Frers design punches her way out through the Heads, bringing back so many memories of one of the great eras of this remarkable race.

The big boats fighting it out for line honours in the Rolex Sydney Hobart have always held an irresistible glamour. These days it’s the mesmerizing speed of a Wild Oats XI, the jaw-dropping acceleration of Comanche.  Lithe, athletic, not an ounce of fat to be found anywhere in their exotic carbon-fibre hulls, these giant blue-water skiffs epitomize the modern, professional aura of elite sport in 21st century Australia.

In the 80’s and 90’s, the age of the great aluminium hulled maxis, it was all about resilience and power. The stately American Nirvana may have wrapped that power in Newport Rhode Island elegance; the pretty Siska in brash West Australian bravado, but it was still raw power.

When John Kahlbetzer‘s Bumblebee IV burst onto Sydney Harbour in 1979, she oozed brute force.  A prize fighter, uninterested in a points decision when a knockout would do.

These big, heavy maxis roamed the world, from one big race to the next. They were little ships. Be it Valetta, Monaco or the CYCA marina in Rushcutters Bay, we plebs would gaze in wonder at the wealth, and yes, a different kind of power, that these giants represented.

“She is a very powerful boat, and she bites if you let her get away from you,” muses Graham ‘Scooter’ Eaton, Maxi Ragamuffin’s tireless boat manager come skipper. “She is a tank, state of the art in her day, no compromises.  But a cruising boat compared with today’s V70s.”

Kahlebetzer won line honours in 1979, then took her overseas to beat the best in the world. In 1984 Syd Fischer bought her, called her Ragamuffin, and campaigned her in six Hobarts, winning line honours twice; in 1988 and 1990. However, soon the first carbon-fibre maxi, Windward Passage II, would bring the curtain down on the aluminium age.

It has been a mammoth job getting Maxi Ragamuffin back to racing trim. “She’s been fully stripped and rebuilt from stem to stern,” Eaton says “We took 95 percent of the deck gear off.  All the winches were stripped and we found that 50 to 90 percent of each winch had to be rebuilt and there were no spare parts available anymore. Everything had to be custom made in Sydney.

It hasn’t come cheap.  Keith Batt, the CEO of  Nant (Whisky) Distilling Company and Maxi Ragamuffin’s owner, thinks there hasn’t been much change out of a million dollars. Buying the boat was the cheap part. But he has no regrets.

“It’s been just incredible, the enthusiasm and passion that everyone involved has brought to this project, which started as a marketing idea.  I do some sailing and I asked if we could sponsor a boat in the race.  When they came back with the cost, I thought we might just as well buy a whole boat.  I googled boats for sale and there was Maxi Ragamuffin.  I flew up to Queensland straight away. “

For Batt, his attitude to the boat is similar with his approach to whiskey making.  “We make our whiskey in traditional ways, in restored stone buildings, built by convicts in the 1820s.  We like tradition.

“This boat represents something about Australia.  Everywhere she goes people come to see her because they remember her and tell their kids about her.”

And in keeping with the whiskey tradition, Maxi Ragamuffin will carry a very unusual cargo: two barrels of whiskey will mature on the way to Hobart.

“In the past they used to mature whiskey by putting it in barrels as ships’ ballast,” Batt explains.  “They discovered that this gives the whiskey lovely colour.”

Of the Rolex Sydney Hobart, Batt says: “We’re going to be trying hard, she is stunning to sail. To see our helmsman, Roger Snell, put her through her paces is amazing. He throws her around like 20 footer.  She loves going upwind.”