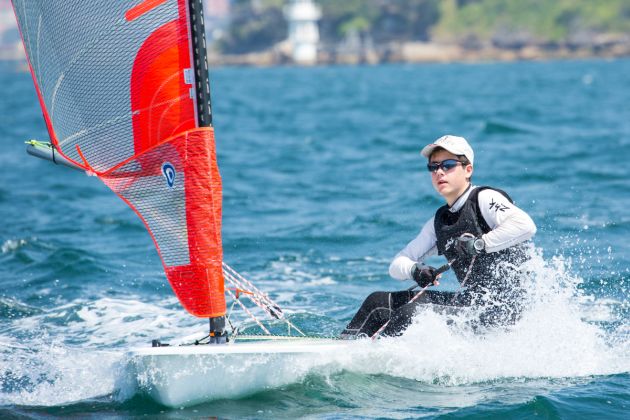 Sail Sydney’s fourth and final day of racing came with the same side order of blue skies and wind, a  result of the high pressure system sitting over the Tasman and associated trough pushing cooling sea breezes onto the New South Wales coastline.

There was a bit too much in it for some in the fledgling Optimist Green fleet. For the RS:X boards, or ‘wind whackers’ as they are affectionately known, Christmas came early for the large Korean contingent whizzing around Rose Bay in perfect board conditions, 20 knots of NNE breeze.

All the Olympic classes bar the RS:X completed their schedule yesterday, Saturday December 19, 2015. The remaining youth and invited classes closed out the final multi-class regatta prior to Christmas and the New Year, and important nationals and world championships on in January.

Sail Sydney PRO Colin Chidgey had these last words: “Fantastic four days with the nor’easters and a great line of courses from Rushcutters Bay to North Head, and the sailors all enjoyed themselves.”

Final pointscores for all divisions at Yachting NSW’s Sail Sydney are available here.

Olivia Williams from the Royal Prince Alfred Yacht Club plans to take confidence from her first place in the Intermediate fleet going into next month’s Optimist Australian title at Georges River Sailing Club, where she’ll be up against a much bigger national fleet.

After the medal presentation at the host Woollahra Sailing Club, the spirited 10 year-old from Sydney’s northern beaches commented: “I felt comfortable out there today, it was really windy but I’ve been in stronger. Sail Sydney was great and we didn’t have to wait around for races because there was wind.”

Ryan Littlechild took out the Open division from Archie Cropley.

Dongwoo Seo was unbeaten in the board class where the Koreans retained the top four places. The Australian Sailing Squad’s Joanna Sterling (QLD) was the first woman and Australian, coming in fifth after eight races.

Tasmania’s Jock Calvert and Queensland’s Emma Baillie are both part of Australia’s team competing at the Youth World Championships in Langkawi, Malaysia, starting in a week.  Sail Sydney wasn’t one of Baillie’s best results-wise, but there were plenty of takeaways. “I learnt a lot about how the winds work here, and how the gusts fill in and this will be helpful for Malaysia…for seeing the pressure and getting to it, plus board handling. Racing is the best practice.”

Calvert is a full Tasmanian Institute of Sport scholarship holder. The bridge to this level is the state’s Emerging Talent Squad, a program that identifies talent in junior development classes and moves those sailors across to youth classes, such as 29ers and Laser Radials, and the path to potential youth team selection. State high performance coach Richard Scarr sees the state’s future success stories coming from the ETS program that offers athletes nutrition, psychology and strength conditioning advice complementary to specialist on-water coaching.

There is one issue for both Baillie and Calvert. They have grown too big for the RS:X. At 195cm and 85kg Calvert has the Olympic dream but needs to move to a new class, most likely a Finn, to have any chance of reaching the sport’s pinnacle. At 175cm, Baillie has the same challenge. She’ll hang in for another six months then consider a move, probably to a 49erFX.

Thomas Larkings’ consistent top three results in the Sabots clinched the gold medal while in the Tasars Darryl Bentley and Rick Longbottom won from Bradley Stephens and Jennifer Overton.

Viper winners Jack Felsenthal and Brett Goodall out-sailed Lachlan and Ethan White on their boat, Not Related, and in the Byte fleet local boy Fletcher Duff took a narrow one point win from clubmate Hugo Stoner.