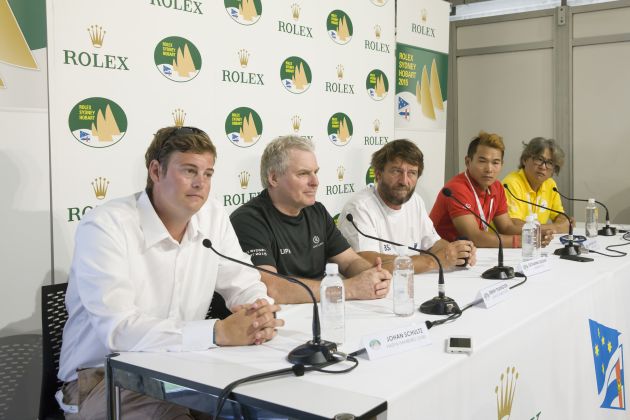 This year will see more international boats and crew than ever before.  A record 27 foreign entries will cross the Sydney Harbour start line of the Rolex Sydney Hobart Yacht Race on Boxing Day.

The bar at the Cruising Yacht Club of Australia has always had its fair share of exotic accents in December, but this year the place is positively teeming.  Just how do you say “I want another middy” in German, Chinese, French, Italian, Ecuadorian….?

Has the marina ever looked more colorful, with the 12 festively decked out Clipper yachts side by side? These alone have brought young sailors to our Aussie race from 26 different countries.

And as in past years, the reputation of the Rolex Sydney Hobart as arguably the toughest of the major ocean yacht races has been a big draw card.

“It is a very difficult race,” says Italy’s Giovani Soldini, a household name who has sailed hundreds of thousand miles and has bought out the fast, exciting VOR70, Maserati. “Bass Strait can be a very bad place to be, but there is so much competition and so many wonderful boats. It is a race at the highest level.”

“It (the Hobart) is a myth that everyone talks about,” says Johan Shultz, the skipper of the unmistakably red-hulled JV52 Haspa Hamburg.  “Not many have the chance to come here, so we are pretty lucky. All the guys in Germany will be taking a good look at us and how we go.”

And of course it is Sydney, glowing in summer warmth while the northern hemisphere curls up around the fire.

“It has been distressingly easy to get the family out here,” jokes Jeremy Pilkington, who has entered his gorgeous Lupa of London, the Baltic 78 that has somehow managed to combine luxury with a canting keel and the race pedigree of Reichel/Pugh (they also designed Wild Oats XI) to stunning effect. “While we are out there training and tuning the boat, they are empathizing with us around the pool, but we had to bring everyone down for the race.”

Of course there have always been Poms in this race.  After all, one of their Prime Ministers once famously took a break from Downing St to win the race in a modest S&S 34.

It’s the arrival of the Mainland Chinese that has perhaps created the biggest buzz this year.  There have been boats from Hong Kong in the past, but never from the mainland, let alone with a full Chinese crew.  Now there are two of them.  Ark323 and Shuguang Haiyang.

“We are the first professional sailing team in China,” Ark323 skipper, Zhao Chuan Bao explains. “And the first TP52 in China.”

Both Chinese yachts have competed in long offshore races in Asia and both programs are very focused on encouraging their countrymen to get involved in what is, of course, an embryonic sport in this rapidly growing country.

“As you know, China is very far, and it is difficult to come here,” Shuguang Haiyang’s Dong Qing says, “It is a great challenge to prepare everything – the boats, the sailors, the logistics.

“But there will be more Chinese.  We hope to build a long term connection with the CYCA so that we can have more competitors in the future.”

Fostering a love of ocean sailing has, of course, been a life-long passion for Sir Robin Knox-Johnston, the first man to sail solo around the world and the genius behind the Clipper program.

They come to Australia every second year as their multi-cultural crews circle the globe, and have become a valued addition to the Rolex Sydney Hobart.

“It’s a great race. The schedule of our circumnavigation ties in with it, so it is an irresistible opportunity.  A no-brainer,” Knox-Johnston says, though he does joke that some of the crew wonder why they have to sail around Tasmania three times.

Some of the Clipper sailors have been sailing all their lives, steeped in the lore of ocean racing.  Others are newcomers to the peculiar attractions of white water over a suicidally bucking bow and perpetually damp wet weather gear and bedding. Abi Oyepitan has won Olympic sprint gold. Ocean racing is no sprint.

“It was a shock, a whole other world. I am totally out of my comfort zone. I didn’t even know about the Rolex Sydney Hobart before I got involved with the Clippers,” she concedes.

For the Clipper sailors it will be mostly about the intense rivalry of a race within a race. The Yanks on Comanche and Rambler will not take their eyes off line honours, Soldini’s Italians will go all out for the Tatterall’s Cup, and, if the race should turn into a heavy weather beast, a line honours upset would be nice too.

All will head back to Europe, The America’s and Asia with a kit bag full of stories.