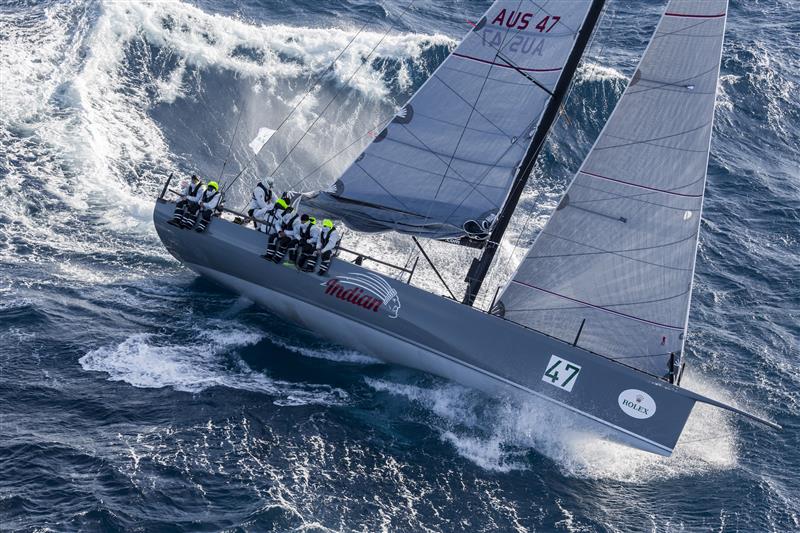 The Indian team from Western Australia arrived at Constitution Dock just before 11am this morning to a roaring crowd of fans. It was a tough race for the Carkeek 47, who today became the 12th boat to finish the race.

After battling through the southerly and keeping in touch with the bigger TP52s, Craig Carter’s team was in a prime position off Tasmania.

“We had been through the whole nightmare and then we had that day of light air stuff. Then that evening the breeze really started to build from the nor-west and we were smoking,” said crew member Paul Eldrid.

“We had the zero on and were loaded up and killing it. At that stage we had put the nasty stuff behind us and had placed the boat really well. Then we thought now it is time do what we do really well, utilise the form stability of the boat and put our foot on the gas and load it up. And we were.”

That is when the bob stay snapped and the bow pole broke off. “Then we just settled into another watch and BANG! There was this god-awful noise. But we went bow down, managed to have a look and there was nothing structural. Then we just went about a regrouping process.”

From then on they were racing upwind and while the 47 footer is able to hold onto the 52s downwind, it is another story upwind. That combined with getting a little out of phase with the shifts saw them slip back.

They were down but not out. “When we got into some light air, we couldn’t use our upwind zero and then coming into the entrance late last night, we couldn’t get a flight. We were pressing into Celestial and Teasing Machine but we couldn’t press in hard enough,” he said.

“We actually mongrelled a system, we ended up using our A5 as a running sail and we pulled the furling unit off our fractional zero and sent it to the mast head and put it on, just to try and get the boat through. But we couldn’t change sails.”

Eldrid has done four Sydney Hobart races and says this one was mentally challenging. “It was probably one of the hardest ones, only that I think it was a real mental Hobart, to come out of the blocks really quickly and then have to face the gale, then manage the boat after the gale. And then to stay focused on the race.”

“I take my hat off to all the other competitors that managed themselves through that. Because that really was a pretty intense system and that took some skill and took some guts to come out the other end of it. So I congratulate everyone that ends up here.”

This year’s race has been a challenge for everyone. After almost four days, 31 boats have retired and 12 have finished. There are still 65 boats out on the racecourse.