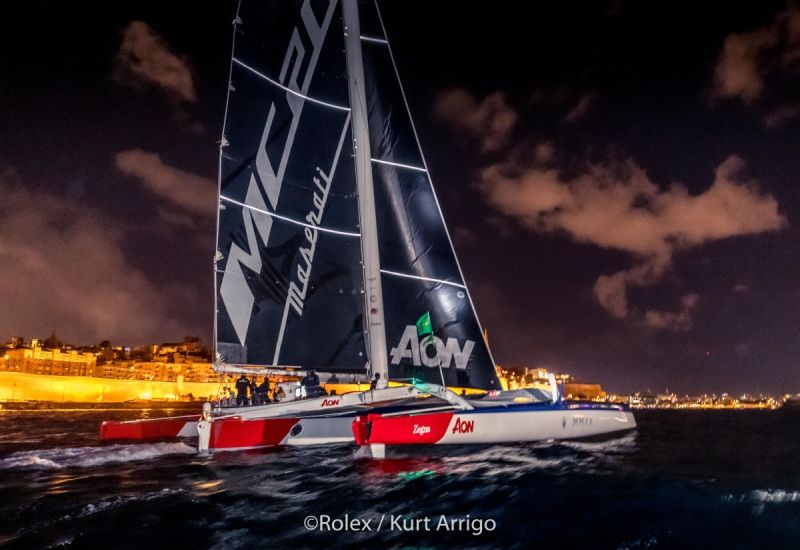 Mana (ITA), owned by Riccardo  Pavoncelli, finished fifteen minutes behind after a closely fought  battle around the course.

1700 CEST. After another long day, the 2020 Rolex Middle Sea Race may record its first finisher this evening. At the time of going to press, the two Italian powerhouse trimarans, Maserati Multi70 and Mana, are 30nm shy of the finish struggling in a light wind band in the lee of Malta. Despite their immediate difficulties, they are over 400nm further along the track than the backmarker on the course.

It took until 2330 on Sunday night for the pair to clear Favignana and settle into the leg south to Pantelleria and eventually Lampedusa. Running dead downwind is not a favoured point of sail for the tris, and the crews will have put in a proper shift gybing their way down the 165nm section. Reaching Lampedusa at midday, any hope of a simple routing back to Malta would have been tempered by the predicted hole in front of Malta, evident on most public wind models. Still locked together after over 550nm of racing, Maserati holds a slight edge over Riccardo Pavoncelli’s Mana, but Giovanni Soldini’s crew will need their wits about them to convert that to a victory.

When we left the Rolex Middle Sea Race monohull fleet yesterday, a handful of participants had rounded the mark at Stromboli. 24 hours later, there is only one yacht left to get around the landmark: Carsten Sommer’s Logoff. The German crew was subjected to a real Messina Strait experience in the small hours of this morning (19 October) and has 13nm to run.

As predicted, the wind conditions to the north of Sicily were light and fickle during Sunday night and throughout Monday. Every boat has experienced some form of park up in little or no wind. The length and extent of the disruption has varied. Some boats appearing to escape relatively unscathed, others overwhelmingly frustrated.

At the front of the monohull fleet, a fascinating duel continues to develop. At the Favignana transit point, the gap between I Love Poland and Marton Josza’s Wild Joe was around 0.5nm and three minutes on the water, with Wild Joe seven hours ahead on corrected time. An enthralling race to the finish beckons. There appears to be a thin slither of wind from the north on the eastern side of the Sicily Strait offering reasonable pressure down to Pantelleria. The slither looks likely to diminish in strength overnight, while turning more easterly in direction before building again. At the same time, the situation around Lampedusa at the bottom of the course looks particularly sketchy.

When the two boats passed Stromboli yesterday afternoon, they were separated by approximately 10nm. That distance was maintained until the Polish VO70, skippered by Zbigniew Gutkowski, was abeam the Aeolian island of Alicudi. At this point she fell into a hole, speed dropping off rapidly, while the Hungarian Reichel/Pugh design kept on moving, almost slipping into the lead until they too sank into the quicksand. I Love Poland’s lead had compressed to three miles as the two started moving. By San Vito lo Capo, the gap had shrunk still further.

There is real excitement among the Maltese boats. The desire to be first boat home is strong and there are three, possibly four, boats in contention despite being in different classes. Lee Satariano’s Artie III (IRC 3) led the Podesta siblings’ Elusive 2 (IRC 4) around Stromboli at 2145 CEST on Sunday. The two continued on towards Trapani locked together. Then, at just before 2330 CEST, Jonathan Gambin’s Ton Ton Laferla and Ramon Sant Hill’s Ben Estates Comanche Raider passed the volcanic island. From Salina, things became a bit of a lottery and by Alicudi, some 20nm on, Artie, Elusive and Ton Ton were virtually line abreast. By 1700 CEST, Elusive, lying due north of Palermo, had managed to establish a clear lead over Artie, 5nm to the north east, with Ton Ton only marginally behind, two miles to the south. Comanche Raider continues to push, but has fallen away.

Towards the back of the fleet, Dave Latham on the Reflex 38 Intuition, the sole GBR flagged yacht in the race, reported in from just north of Filicudi: “We are currently at the bottom of a snake in this game of snakes and ladders.” Jan Scharnetsky and Lars Gerchow, the double-handed crew racing the Dehler 30 One Design, Atlas, also off Filicudi messaged in: “Sunset was a true redemption on Sunday evening after a tough passage through the Messina Strait!”

Jonathan Camilleri Bowman, skippering, Maltese Falcon sent in a video report: “Last 24 hours have been both interesting and amazing. A great start, nice and speedy up to Sicily. We lost some ground going to Messina, mainly due to some of the decisions we have taken! The strait proved quite tricky as usual, but we had some really good tactics helping us breeze through compared to some others. The team is happy, motivated and doing well. We are all happy to be here doing this amazing race. Thank you to the committee and the organisers!”

IRC Class Round Up

IRC 1
Wild Joe holds a two-hour lead over Aragon (NED) at the Favignana waypoint. The GPS tracker on E1 (POL) has stopped functioning so transit times are unavailable and Sisi (AUT) has to reach Palermo. Wild Joe and I Love Poland are closing in on the multihull Shockwave at Pantelleria.

IRC 2
Freccia Rossa and Teasing Machine are the only two yachts in class to have passed the transit at Favignana. Freccia Rossa has eked out a fragile lead of 19 minutes. Balthasar is another yacht whose GPS tracker is playing up, but according to an AIS plot is just off Levanzo, 27nm behind the leaders. Gregor Stimpfl’s Scuderia 65 Hagar V and Jean Pierre Dick’s JP54 The Kid Mermaid are on the approach to Palermo.

IRC 3
Tonnerre de Glen has continued to impress over 30 miles ahead of her class rivals. The closest on the water are Katsu, Kito de Pavant’s Class 40 Made in Midi and Artie.

IRC 4
Maltese First 45 Elusive 2, skippered by Aaron, Christoph & Maya Podesta has extended their class lead on the water to over 30 miles ahead of Marco Paolucci’s Italian Comet 45 Libertine. Luigi Stoppani’s Italian Frers Swan 48 Mia is still estimated to be third in class.

IRC 5
Jonathan Gambin’s Maltese Dufour 44R Ton Ton Laferla has pulled away from the rest of their class. Alexey Moskvin’s Russian J/122E Buran has found good breeze to place second, but the remainder of the class is making slow progress. Francesco Cerina, racing Giro 34 Lima double handed, has covered just 60 miles in the past 24 hours.