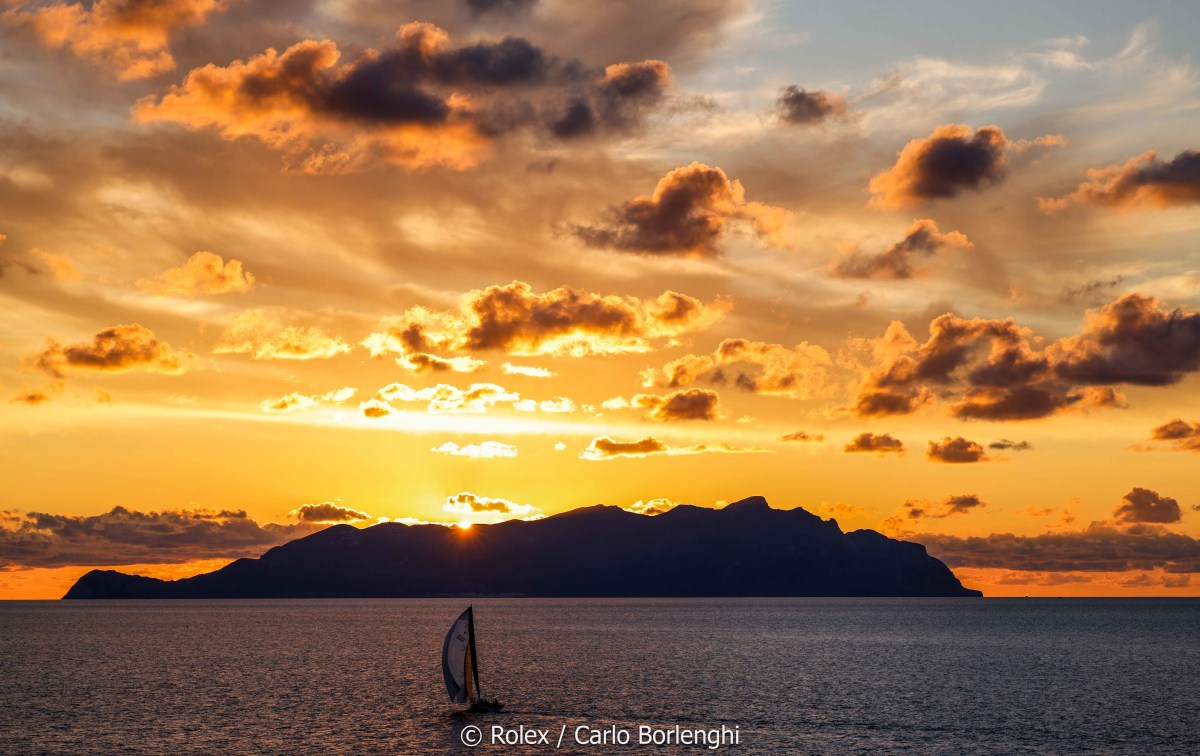 1700 CEST: The story of day three of the 41st Rolex Middle Sea Race was undoubtedly the dogfight between Maserati and Mana, which finally concluded last night (Monday) at just after 2030 CEST. A classic tale of boat-on-boat competition between two well-matched crews. Both going at it, hammer and tongs, for the entire length of a 600nm offshore race.

The story of day four is less dramatic but, from a yacht-racing perspective, is still gripping. As the multihull chapter nears its end, the monohull one is getting interesting. The 2020 Rolex Middle Sea Race is far from over.

The overview sees three multihulls in the clubhouse, with two left to finish, while 42 monohulls are spread from Lampedusa all the way back to Stromboli. For the crew of the German yacht, Logoff, it must feel like they are on the set of Groundhog Day given they have yet to round the volcanic island mark.

It may feel the same on the leading monohulls,  the Grzegorz Baranowski skippered I Love Poland and Martin Jozsa's Wild Joe.

On Monday evening, the two were well on their way to Pantelleria and sailing at over 10 knots. 24 hours later, they are only 120 nm further on, having reached Lampedusa.

If it was painful during the night, the daylight hours today (Tuesday) will have been excruciating. The Polish VO70 reached the southern-most mark of the course at 1100 CEST this morning.

Six hours later, they are past the pancake flat island, but only just. The crew on Wild Joe used the Poles' discomfort to make up ground lost at Pantelleria, but they too are now stuck. It has taken four hours to sail the length of the five and half mile-long island.

I Love Poland  called in to report they were in good humour in spite of the hold ups encountered on the course. “We are stuck with no wind just after rounding Lampedusa. From the beginning of the race, we have been focused on speed and sailing according to our navigation plan. In a few hours time, some wind should come in, and then we should be able to continue and sail straight to the finish line. The whole crew is motivated, and we will be pushing forward during the last night – just as soon as the wind allows it.”

Gordon Kay called in from Wild Joe at Lampedusa. “We had a mixed day yesterday,” explained Gordon. “We let I Love Poland get in front of us at Favignana. We then sailed very different courses down to Pantelleria. It went okay, but then we made a ‘slight tactical error’ and positioned ourselves a little too close to Pantelleria and parked for a number of hours. I Love Poland moved on, probably, 20nm in front of us. Once we got away, we went into hunting mode.”

Wild Joe steadily ate into the lead and enjoyed watching the larger boat getting bigger and bigger.

“It is going to be very interesting this final run to the finish,” concluded Gordon.

He is not wrong. While the wind is expected to turn further to the south, it is forecast to build from the west. Whichever one of the two picks it up first could gain the next significant advantage in the battle for monohull line honours.

Twelve of those boats are also past Pantelleria, where Freccia Rossa has extended her lead by six minutes on Teasing Machine, but nearly three hours on Tonnerre. The wind does look to be filling in, but from the south. Those heading to Lampedusa will be upwind, those on the leg to Malta will have a much more favoured angle.

In the battle of the Maltese, the Podesta siblings' Elusive 2 appears to have made a decisive break from her nearest competitors, Lee Satariano's Artie III and Jonathan Gambin's Ton Ton Laferla.

Lee Satariano called in this morning. “Finally, we have made it past Favignana after another tough night,” advised Lee. “We are now back in the breeze. There has been a lot of upwind sailing for most of the race and that looks likely to continue. We currently have seven knots of breeze from the south east.”

The crew is in good spirits, and Lee probably voiced the sentiment of the entire fleet when he added, “It is good to be back out racing offshore after what we have all been going through.”

When Giovanni Soldini crossed the finish line in Marxamxett Harbour on Monday night at 2041 CEST he had a huge grin on his face. Soldini is a highly experienced sailor, with over 25 years of ocean racing to his credit. He won the 1999 Around Alone, a single-handed race in which he also became famous for his daring rescue of fellow competitor Isabelle Autissier, who had capsized in the South Pacific 1,900 miles from the nearest land.

“That was really a great race,” said Giovanni. “There were many, many moments. It was really a close contact race. We were always together with Mana. It was all about speed and manoeuvres”.

It was clear that both crews had enjoyed the race, despite its intensity.

“Giovanni is a great competitor,” said Brian Thompson, skipper of Mana. “For us, it is a lot more fun, more enjoyable, to come second to Maserati and have that amazing battle and learn so much about this new boat than to have won it by a country mile sailing on our own.”

Giovanni was equally complimentary. “It was really nice to have a such great competitor. I think it was the best Rolex Middle Race I've ever done, for sure.”

It is typical of yacht racing for winners to be humble in victory and losers gracious in defeat.

“To be in the zone, for so long, focused on that battle, was just fantastic,” continued Brian. “We are very happy for Giovanni and his crew.”

Any pain felt by Mana with defeat on the water may have been soothed by a likely win under corrected time. If that comes to pass it will be honours even for two exceptional crews.

IRC 4 (Favignana)
First 45 Elusive 2 (MLT), skippered by Aaron, Christoph & Maya Podesta, was the only boat in class to have rounded Favignana and ranked sixth overall in the fleet. Some 100 miles astern was Marco Paolucci’s Comet 45 Libertine (ITA), racing double-handed. In his first ever race, Luigi Stoppani and the Swan 48 Mia (ITA) were third in class on the water.

IRC 5 (Favignana)
Jonathan Gambin’s Dufour 44R Ton Ton Laferla (MLT) was the only boat to have rounded Favignana. Alexey Moskvin’s  J/122E Buran (RUS) has had a great leg north of Sicily to close the gap to 14 miles. Off Palermo, Paul Debono’s Elan 410 Bait (MLT), another race debutante, is having a private battle with Francesco Cerina’s Giro 34 Lima (ITA).