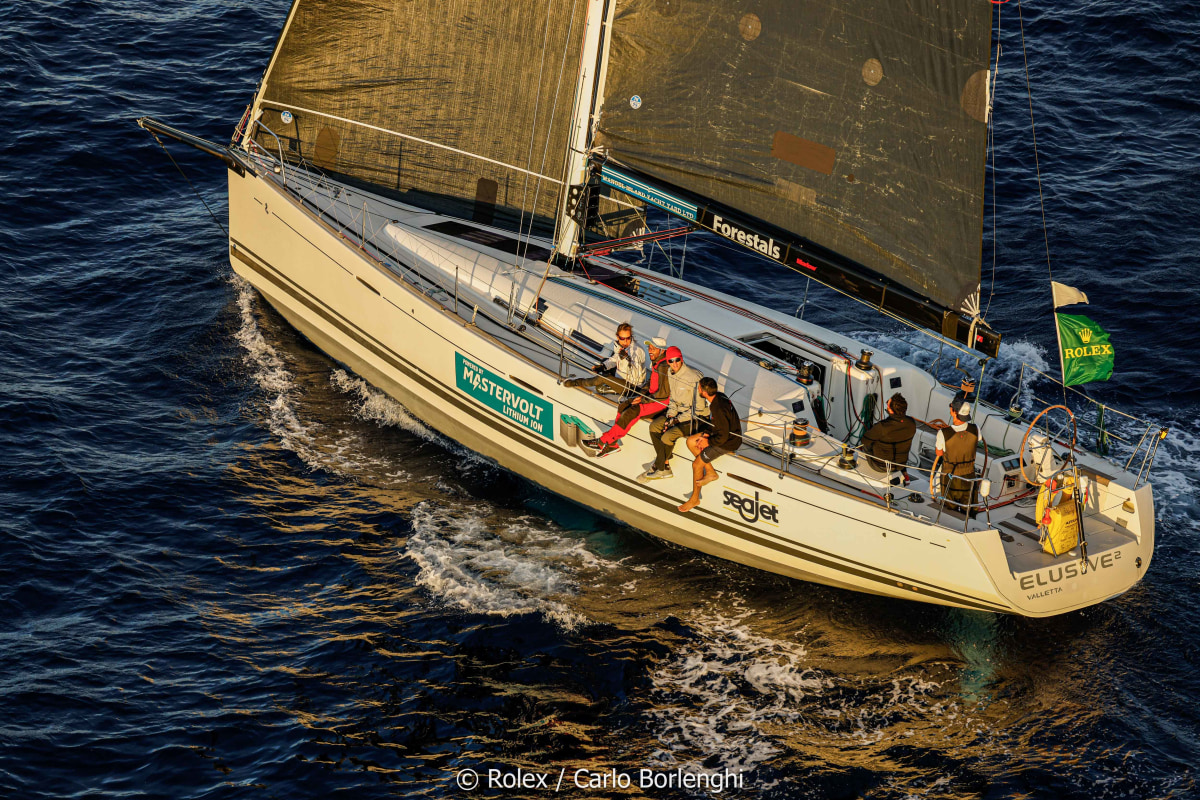 It is the year that just keeps on giving. By midnight on Wednesday, 15 of the 50-boat fleet had completed the course. Ten of those were competing under IRC for the overall Rolex Middle Sea Race trophy and the French yacht, Tonnerre de Glen, was the ‘clubhouse leader’, facing a tense wait to see if their corrected time could be overhauled. With more than 30 boats still on the course, there were plenty with the opportunity, if conditions conspired in their favour.

At 0350 CEST, this morning (Thursday), it was all over for Dominique Tian’s Tonnerre. The Maltese yacht, Elusive 2, slipped across the line in a fading breeze to take the lead by just over one and a half hours. The burden of waiting had transferred.

That wait was close to 12 hours but, at 1500 CEST, the Royal Malta Yacht Club was satisfied no one out on the course could surpass Elusive 2. As winners of last year’s Rolex Middle Sea Race, by winning the 41st edition, the crew of the Beneteau First 45, jointly skippered by Maya, Christoph and Aaron Podesta, had achieved something no boat had managed since 1980 – winning back to back races. The Podesta family chapter in the legend of the race, began by father Arthur back in 1968, continues to grow.

The Elusive crew are an impressively tight knit group. The preparation of their boat is detailed and exemplary. It was made more complicated this year by the need to consider social distancing and maintain family bubbles. It is a real team, each member bringing something special to the mix. So closely bound are the four main protagonists, the three Podesta siblings and the navigator, David Anastasi, that they even considered not racing at all had one of them fallen ill before the start.

“It is a huge achievement to have won this race in back to back years,” enthused Christoph, clearly grappling with the enormity of their success.  “It is really hard to win the race at the best of times, so winning it twice in a row is massive and something we are all going to be very proud of for a long time to come. We are sailing with our family boat, with a family team and I am struggling to find words to describe the feeling!”

“It is quite surreal that we have managed to tick all the boxes to top the podium again,” confirmed Maya. “The race means a lot to us. We worked really hard preparing the boat, just as if it was any other year. We were juggling so much between work and family though, we almost did not have time to think properly about the race. Nothing comes easily and we worked very hard for it pushing, pushing, pushing.”

For Aaron, too, the size of accomplishment is taking time to dawn, perhaps reflecting the exhaustion etched in his face as he stepped ashore after nearly five days at sea: “Generally, a Rolex Middle Sea Race is a mix of physical and mental toughness. Last year was a good mixture of the two. This year, the light conditions made it mentally very challenging.”

“Physically it was pretty straight-forward,” continued Aaron. “There was no battling with oilskins while the boat pounds and heels, or getting in and out of a wet bunk. Mentally, though, it was super-draining. You could not relax for one minute. There were wind holes everywhere, every corner of the race had a park up. We had to really plan how we were going to get out of the holes as quick as possible.”

David Anastasi commented: “This year was really interesting tactically and navigationally because of the relatively small size of the fleet and our class. Some of our usual competition did not make it, so we lacked boats to gauge ourselves against. Last year we could see our gains. So we sailed our race, were confident in our decisions, making them based upon where we were on the course rather than looking at other boats.”

Despite the fatigue from the cerebral test, they clearly relished the challenge. Christoph, who was completing his 19th race, enjoys each opportunity to learn more about the course: “Every year, I keep adding new tricks and pieces of the puzzle to the notebook of the race. Hopefully I will use them in the future to make sure we do not get stuck or lose valuable time for silly mistakes.”

Like his brother and sister, Christoph was delighted that they and the crew had adapted well to the circumstances of this year. “We normally have a really heavy weather piece of the race that takes it out of us,” he continued.  “This year, I think all that energy was channelled into patience and calmness, keeping the boat going fast, trying to understand the weather patterns and strategic positioning on the course.”

As well as being first overall in the IRC fleet, Elusive secured the veritable ‘cherry on the cake’ according to Aaron, by being first Maltese boat home on the water. Something they really had not expected at all, but being fiercely proud of their national heritage, a scalp that is valued highly.

Are the Elusive crew looking ahead to next year? “We are clearly quite addicted to the race,” admits Christoph.  “I have no doubt we will start joking between us about modifications and improvements, picking up upon weaknesses we found with the boat and ourselves. I’m sure we‘ll keep on building on all the hard work.”

It has taken 40 years for a boat to repeat success in consecutive years. Who would bet against next year being a three-peat.

By 1700 CEST, 25 yachts had completed the course with five yachts retired. In the battle for overall honours in the monohull fleet, the ClubSwan 50 Balthasar (BEL) holds second place and the Maltese yacht, Ton Ton Laferla, skippered by Jonathan Gambin lies in third.