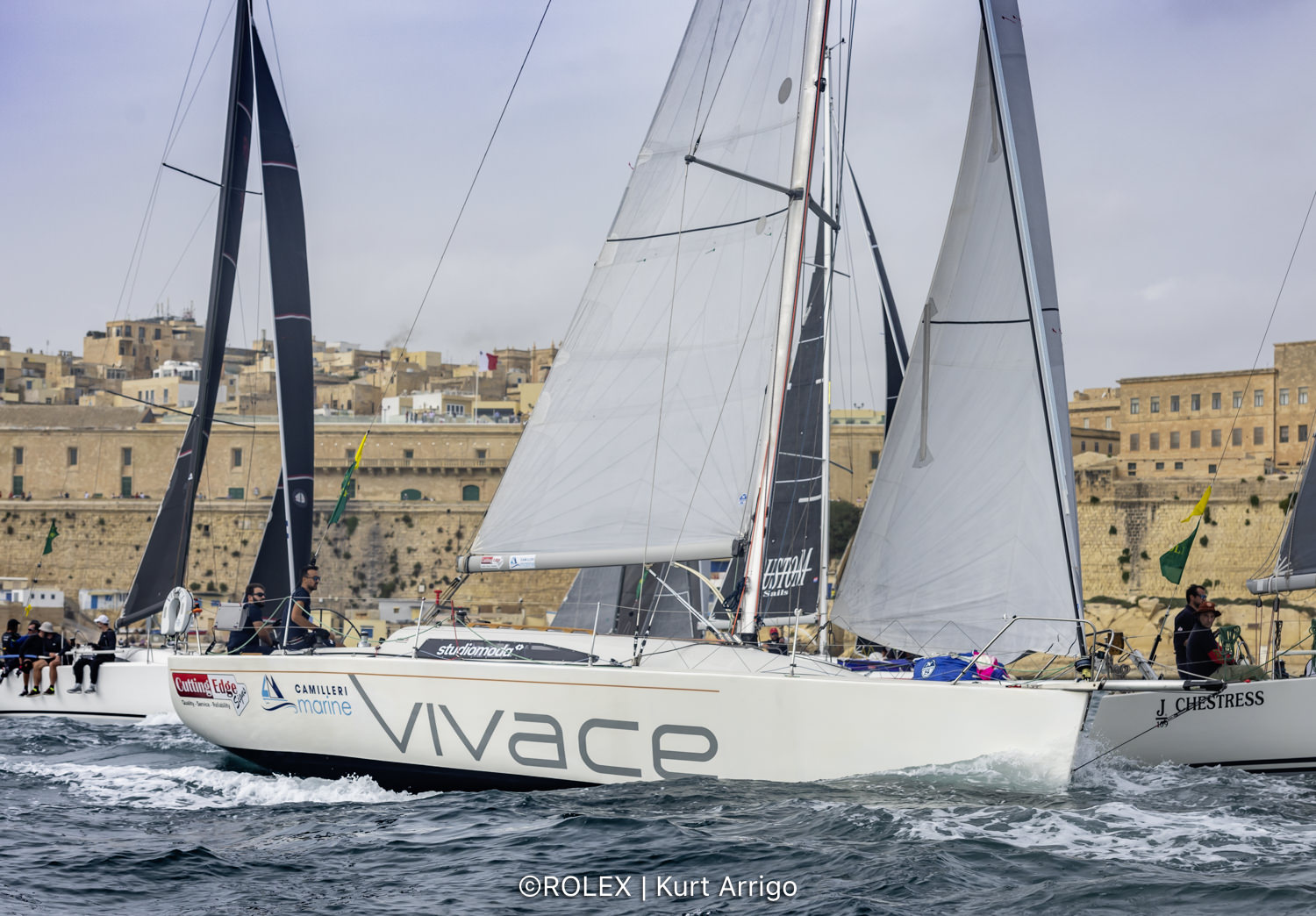 This year’s Rolex Middle Sea Race was tough, especially for the smaller boats, and at times during the 606 nautical mile expedition, gale force winds and tumultuous seas battered the fleet.

Eleven teams were racing in the Double-Handed class, adding an exponential level of difficulty to an already challenging race. Five of the pairs completed one of the most demanding races for many years.

Richard Palmer, racing the JPK 1010 Jangada with Jeremy Waitt, won the Double-Handed class under IRC. The British duo have raced thousands of miles together, including winning the 2019 RORC Transatlantic Race overall. The 2021 race was very much unfinished business for Palmer and Waitt, after retiring from the 2018 race.

“That year, the race was the end of the RORC season for Jangada. We only had to cross the finish line to win the series,” explained Richard. “However, part of our rig failed west of Stromboli. Not only did we not complete the race; we also failed to win our entire season.”

Fast forward to 2021 and, according to Waitt, the decisive moment in this year’s race, came at the same point on the course as their disastrous rig failure in 2018.

“We worked very hard to get the right sail combination before Stromboli in preparation for the ensuing gale,” Waitt commented.

“After Stromboli we were flying in 40 knots of wind with the A5 spinnaker up. We were hammering down the waves, it was very exciting, and it was there that we passed a number of boats.”

Palmer added. “With low pressure centred over the racetrack, we had heavy downwind conditions for much of the race. For us it was about keeping the boat in one piece, conserving when we had to, and going hard when conditions eased off a bit. It is an amazing race and a fantastic start to Jangada’s latest campaign.”

Second in the Double-Handed class was Ludovic Gerard’s French JPK 1080, Solenn for Pure Ocean. Racing with Nicolas Brossay, this was first time racing the course two-handed for Gerard, who has done the race twice before, including a class win with a full crew in 2019.

“It was a tough race due to the weather conditions, harder than I expected,” Gerard commented. “I now understand why there are so few double-handed teams in this race. In very strong wind with a full crew, you can have one sailor for every sheet, but when there are only two, you have very limited resources and have to multi-task.

“Concentration is very important, if you want to keep under control. We are very happy to be the first double-handed team to finish the race and place second after time correction. It was also especially satisfying to finish the race close to the best fully-crewed teams in our class.”

“In any conditions, Matthew and I have complete trust in each other,” Delicata’s said. “It was like being in a washing machine most of the time, and we joked that we had booked a spa during the race! Our goal was to finish in the top half of the class, so to come third is above our expectation.

“The first 48 hours were very challenging, and we were quite exhausted,” Gabriele added. “We have been sailing together for most of our lives and our support for each other kept us pushing through. Even when we had a few breakages, we had prepared well enough to fix the boat, and just keep going.”

Congratulations also go to the two other double-handed teams that finished the brutal race. Peter Luyckx and Yan Trouwen racing the Belgian JV39, Blackfish and Beppe Bisotto racing with Matthew Beecher on the Italian Fast 42, Atame.

Full results and all information: http://www.rolexmiddlesearace.com