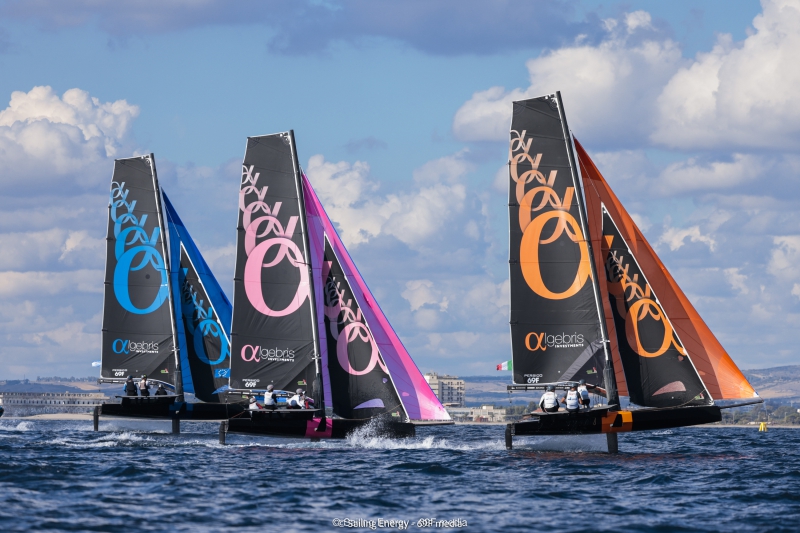 Cagliari: The last knockout round of the Youth Foiling Gold Cup Act 3 was completed today, with Young Azzurra leading the fleet to enter the finals.

As scheduled, the first three races of the finals were also held today and the leaderboard shows the YCCS team currently sitting in second place in the provisional overall classification.

After this morning’s briefing at 11am, the crews headed out to sea to compete in the three races of the third and final knockout round.

In the first race of the day, after a good start Young Azzurra crossed the finish line in second place, paying for a less than perfect manoeuvre on the first leg. In the last two races of the knockout the crew took a third and a fourth place, with no penalties, to complete the round at the top of the standings.

With the knockouts completed, racing in the finals of this last leg of the Youth Foiling Gold Cup began at around 3.30pm and are scheduled to continue through 31 October.

The Young Azzurra team – composed of Ettore Botticini on the helm, Federico Colaninno on the mainsail, and Erica Ratti and Francesca Bergamo alternating on board in the role of flight controller – then completed a further three races, bringing today’s total to six for the crews participating in the event.

The YCCS team fought hard throughout the last races of the day, and despite some difficult starts and times when they fell behind the fleet, the crew gave its all to regain ground.

With a second, a fourth and a third place, Young Azzurra is currently in second place in the provisional overall classification, on equal points with Team France and Team Argentina, third and fourth respectively, and six points behind Team Dutch Sail in first place.

The teams have two more days to move up and down the rankings in the last leg of the Youth Foiling Gold Cup, before the grand final of the circuit gets underway from 1 to 3 November.