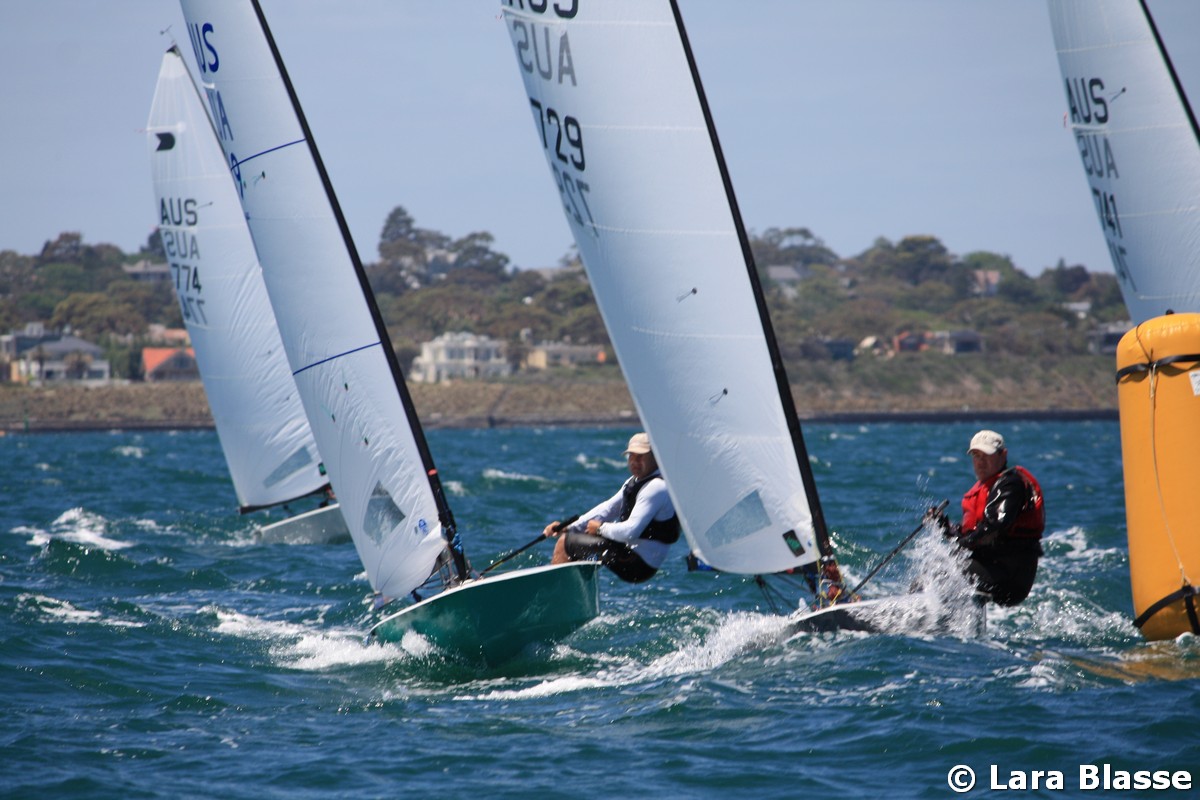 After two more race wins in some spectacular Black Rock sea breeze conditions, Roger Blasse is now just one race away from a record 11th Australian OK Dinghy National Championship title. Mark Jackson is 10 points back in second after two second places, while Brent Williams is up to third, a further 11 points back with just two more races to sail on Thursday.

All competitors were clearly a bit anxious after the lay day and the Race Officer went into a ‘P’ flag start, with a general, then ‘U’, another general and then black and postponement with half the fleet over the start. After a reset and a short delay to allow the sea breeze to build a bit more, the fleet got away cleanly under the Black Flag.

James Bevis, AUS 778, sailing an Ovington with a C-Tech mast and North Sail, was quick up the first beat to round first, with Mike Williams, AUS 730, and Mark Jackson, AUS 768, close behind. Roger Blasse, AUS 749, was in the following pack along with other regatta favourites Tim Davies, AUS 779, and Brent Williams, AUS 754. By the bottom mark, Jackson was out in front, followed by Blasse and Mike Williams. Jackson and Blasse had a close race up the second beat with Blasse rounding the second top mark first, with Jackson in second, Mike Williams third and Andre Blasse moving up to fourth.

Places remained the same into the finish, but Mike Williams and Andre Blasse enjoyed the building sea breeze close up on Jackson by the finish.

Race 8 turned into battle for survival as the wind kept increasing with capsizes, breakages and frequent place changes at the front. An unsuccessfully attempt was made under ‘U’, but then the fleet got away under Black in 20+ knots. Bevis was again leading the way and rounded the top mark first, followed by Brent Williams and Steve Wilson, AUS 741, with Roger and Andre Blasse both close behind. Mike Williams’ day ended on the first tack after the start when he learned why a boom is so called as that is the sound it makes when it breaks.

By the bottom mark, Roger Blasse was in the lead, closely followed by Brent Williams and Andre Blasse, who flew down the reaches. Jackson was in fourth. Bevis passed Jackson and Andre Blasse up the second beat to round the second top mark in third. Andre Blasse again flew down the run and approaching the bottom mark, Roger Blasse capsized on the gybe before rounding the mark, which put Andre in front. Andre had a problem with his vang strop and couldn't gybe so rolled into a granny and as he bore away, the centreboard popped up and he rolled into windward, leaving Brent Williams in front. With a lot of breeze on, Brent went into a difficult gybe and lost control. By this stage Roger Blasse was up and full of water and back in front. Jackson had no problem with the gybe and moved into second. Roger Blasse held on to win, with Jackson in second to a fast finishing Brent Williams in third.

After a 4, 6 Andre Blasse is up to 11th, still counting a BFD from Day 2. He commented on his day, “I really enjoyed the sailing today, unfortunately in the second race I needed to cool off after passing my brother, otherwise happy with my day.”

“Great day for sailing, classic sea breeze, the downwinds don’t get much better than that.”

Michael Horvath, AUS 744, had another consistent day with a 6, 9 and sits in fifth overall.

“In the first race today I started conservatively then pushed hard all around the course trying to maximise a result in the moderate breeze. As the breeze and sea state built substantially for the second race I adopted a minimal risk approach as I was a little overpowered upwind. Rounding the top mark in around 12th I was able to climb three places to ninth with a good second reach and some clean mark roundings.”

“Black Rock has turned on some magnificent sailing conditions which I have thoroughly enjoyed and a couple of top five finishes have definitely motivated me going forward.”

Best sailor to the top mark today was definitely James Bevis. After a 7, 5 he moves up to seventh overall.

“Today was a fantastic day for me. I led at the top mark in each of today’s races, which was very satisfying. This has moved me into seventh place overall which I’m very pleased with.”

“Today was the most fun I’ve had sailing an OK Dinghy since joining the class a year ago. I found the waves very challenging but very rewarding. My lack of downwind technique was less obvious in today’s conditions. Also, I decided to get my capsize out of the way before the start of racing which I have to say worked out a lot better for me.”

“I was also able to get a quick look at the correct downwind technique as Mark and Roger went past, which I’ve committed to memory.”

The 57th Australian OK Dinghy Championship concludes on Thursday with two more races scheduled. So far Roger Blasse has been giving the fleet lessons with seven wind from eight races, and needs just one more result to clinch the title.