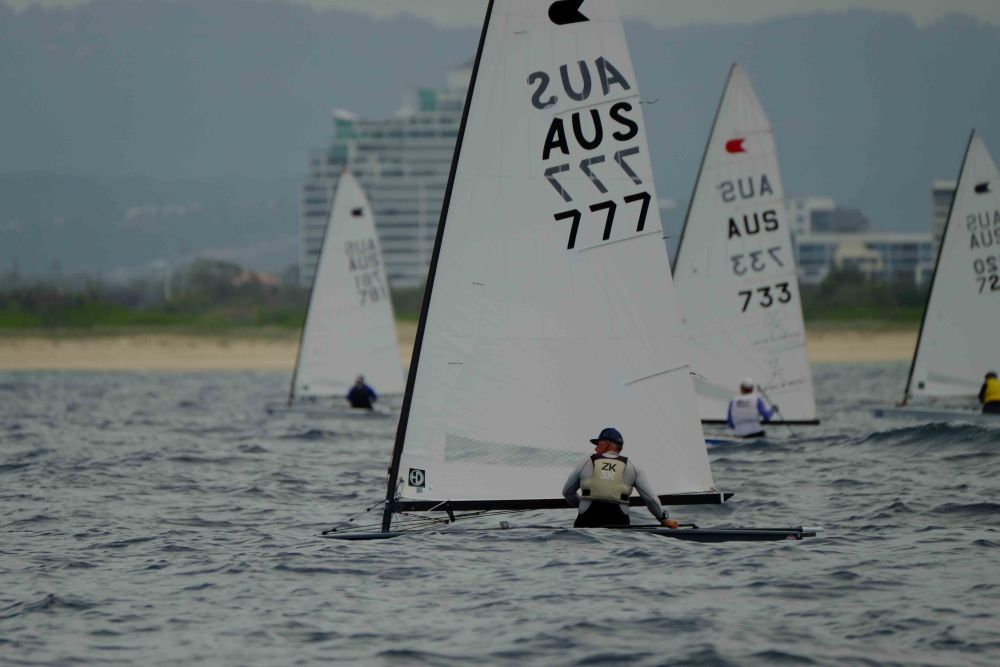 With 8 to 10 knots of breeze at the start of race one, a perfectly clear start for all 42 competitors. A fading breeze of 5 knots occurred as the fleet reached the half way point to the top mark. Race Director Denis Thompson called a change of course from the bottom to the top mark by .1 mile, following a shortened course at the top mark as the breeze continued to fade.

Challenging conditions called for a general recall on the start of race two. A 7 to 8 knot breeze saw majority of the fleet underway on the second attempt, with an unfortunate OCS for two of the fleet. Again the breeze was not in cooperation, dying as the fleet head towards the first beep. Immediately after, race officials were made aware of a severe thunder storm warning in the area, again shortening the top mark dramatically by .4 of a mile with a new shortened leg finishing the race at the new top mark.

After winning his first Australian National title in 1988, Roger Blasse went on to win 10 more which included a remarkable run of five in a row from 2004 to 2008. A regular competitor at World Championships, Roger won the title in 1998 and then again in 2013. He has been actively involved in the class for close to 30 years.

From Woollahra Sailing Club Rob Mcmillan from sailed NB Sailsports to take the lead after day one of racing. “Today’s racing was extremely close, with super light conditions bringing really exciting and competitive racing at the front of the fleet. The race committee did an outstanding job getting two racing races under our belt, however we are hopeful for more wind tomorrow. Staying on the South East for a month, we are extremely patinate about supporting National Championships especially in youth and junior sailing through NB Sailsports,” said Rob.

Southport Yacht Club’s OK sailor Kelvin Holdt, follows closely behind in a fleet of 42 entrants to place third in Green Eggs and Ham. Currently Queensland’s OK Dinghy Champion, Kelvin places to finish day one in front of current World Champion Greg Wilcox. Sailing on Turtle Sails, Greg is an obvious hot contender to be named the National Championships. Returning to the top of the OK Dinghy World Ranking since it was formed more than a decade ago. He has spent more time at the top spot than any other sailor and has been in the top five longer than anyone can remember.

With the call of severe weather conditions, SYC support boats stayed with the entire fleet ensuring all were safely within the Broadwater, towing as required.