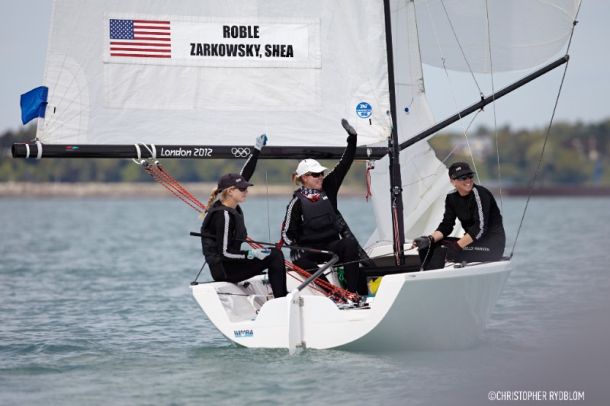 Stephanie Roble excelled on her home waters of Lake Michigan on Sunday afternoon, as she defeated Anne-Claire Le Berre 3 – 1 in the final of the Buddy Melges Challenge, the penultimate event of the 2015 WIM Series. With this first American victory ever on the WIM Series, the Epic Racing Team of Stephanie Roble, Maggie Shea and Janel Zarkowsky, moves all the way to the top of the leader board.

“I want to thank my crew, who never give up, no matter what happens. We’re really excited to win our first WIM Series event on our home waters,” a smiling Roble said.

“We had beautiful racing against Stephanie today, and gave her a very good fight, but unfortunately we made more mistakes than her,” Le Berre commented.

On the big final day of the Buddy Melges Challenge, Lake Michigan offered stable wind conditions with a light southerly breeze and extremely flat water. Due to the light wind, the course was set a little far from shore, so the spectators went out in boats to follow the intense and exciting match racing. Despite the stable wind the conditions were challenging to the crews, putting a premium on good boat handling and boat speed.

“The start, the speed and the manoeuvring was more essential than the tactics today. It was also important to get out on the right side of the course first, to gain the starboard advantage at the top mark,” Le Berre analysed.

Bummed after her loss in the final of the latest event in Lysekil, Sweden, Stephanie Roble was determined not to let that happen again.

“We definitely wanted to come back and come out strong for this event. We won the first two final races, but Anne-Claire managed to beat back in the third, when I screwed up the start and gave away the right side of the course to her,” Roble describes how the final developed.

In the fourth match there were tacking duels up both of the upwind legs, resulting in multiple lead changes. On the last downwind approaching the finish line, the French team kept a narrow lead, but the Americans came with pressure from behind and just managed to cross the line as winners of the Buddy Melges Challenge.

“As Anne-Claire was leading we had to keep it close, and rolled her on the last run,” Roble explained her successful plan.

“Stephanie finished just one metre in front of us, and I must say we could have done that sequence of the race a lot better. Of course we would have preferred to win, to gain more WIM Series points, but now we are looking forward to new fights in Korea,” Le Berre said.

“We’re obviously very pleased with how this season has been so far. I want to thank Liz Baylis and Terry Kohler for all their hard work on the WIM Series,” Roble concluded.

“We worked systematically in the boat today, and we had some great match racing. Renée is sailing on a high level, and we need that to improve” östling commented.

Groeneveld finished fourth in her first match racing regatta since the 2012 Olympics, and wasn’t too sad for her result.

“We struggled a bit with the new rules, in a situation that was totally new to us. But we’ve had a great week, and when we came off the water we said to each other that we definitely want to do more match racing in a near future,” Groeneveld promised.

The Buddy Melges Challenge has been an ISAF Grade One match racing event in Sheboygan for a number of years. The event is named after the famous Olympian, America’s Cup sailor, boat builder, and Wisconsinite Buddy Melges, whose contributions to the sport have been long standing. The trophy for the event resides in the Sheboygan Yacht Club and is a replica of the America’s Cup.

The trophy for the WIM Series overall winner – The Terry J. Kohler Perpetual Trophy – is named after Sheboygan businessman Terry Kohler, a long-time proponent and supporter of women's match racing and all of the sailing activities at Sail Sheboygan. The 2015 WIM Series will be decided at the next and final event, the Busan Cup Women's International Match Race, to be sailed in Korea October 28 – November 1.

Results in the final of the 2015 Buddy Melges Challenge, the third stage of the 2015 WIM Series:
Stephanie Roble, USA – Anne-Claire Le Berre, FRA 3 – 1