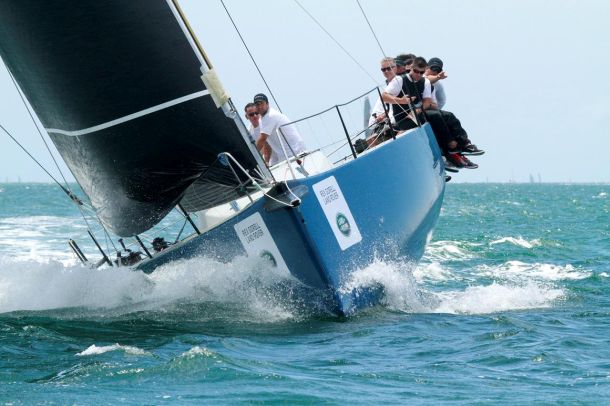 Hometown sailor Rob Hanna from the Bellarine Peninsula has added line honours in the 32 nautical mile Melbourne to Geelong passage race to his list of ocean-going successes, at this year's Festival of Sails presented by Rex Gorell Land Rover.

The 50 footers stole the limelight in the mostly upwind race in terms of the fastest course times, Hanna’s high performance TP52 Shogun V set a time of 4 hours 2 minutes and finished ahead of Ray Roberts’ Farr 55 OneSails Racing. The order was reversed until Shogun V snared the new breeze first.

With salt spray flying from Paul Nudd’s 30ft catamaran Two Tribes as it closed out the final miles to the finish line off the Royal Geelong Yacht Club, the Lake Macquarie catamaran made a grand entrance on its first visit to Geelong at the head of the multihull division.

Conditions for the combined 220-240 strong fleet were sou’west 12-14 knots at the morning start, dying off at the three-quarter mark for the frontrunners then a southerly blew in to rescue the idle and continued to build to  20 knots, accelerating a fast finish. The bulk of the fleet was tied up at the host Royal Geelong Yacht Club by 3.30pm.

A frustrating half-an-hour park-up off Point Wilson while the fleet behind roared down on them with spinnakers up caused some tense moments for Hanna and his tactician Nathan Wilmot. The new sea breeze eventually salvaged their race. “We suddenly went from doing 1 knot back up to 17 knots then finished in the channel ripping along at 20 knots,” said Hanna dockside this afternoon.

“I won handicap in this race eight years ago with a different boat but never line honours, usually there’s a 60 footer to contend with,” the winning skipper added.

Second-placed Ray Roberts said there’s healthy rivalry between the two boats and now his sights are set on even better conditions for tomorrow’s windward/leeward races on the outer harbour starting at 12.30pm.

“We were unlucky today, we want a more even breeze and to come out with a good result tomorrow,” the skipper of 40 years said. “It’s tough competition out here, but we are quietly confident we will finish in the top three.” Roberts, who has recently returned to Australian competition, enjoys the connection between business and sailing the Festival of Sails offers, “It’s all about preparation, training and crew work. I enjoy the challenge.”

Jason Ward’s South Australian Beneteau First 40 Concubine was the division 2 winner on corrected time and division 3 results were still being calculated at the time of publishing.

Nudd’s crew of four backed up after the Australian Multihull Championship to blitz the multihull fleet today, Friday January 23, 2015. Theirs was also a stop-start day, arriving late to the start and being buried, then climbing up into the top 10 until the wind dropped out, another snake on the snakes and ladders board. They took off again with the southerly and charged to the finish in Corio Bay recording 20 knots of boat speed.

Results in other divisions are still being finalised as the remaining boats finish, click here for full results.

Brenton and Jen Carnel’s Phoenix began its Sydney 38 one design quest strongly, quickly putting two bullets away. A third race is underway on a new course, further away from the sports boats course area.

Full details of the free waterfront community festival can be found here.