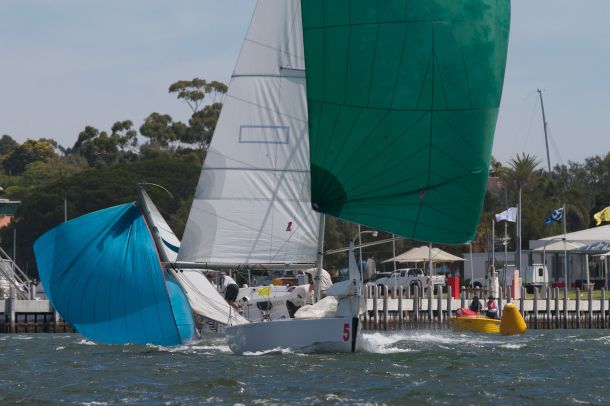 In a five race series that was full of drama and interest, Matt Jerwood overcame the experience of Evan Walker to claim his first national match racing title with a three-nil scoreline.

South westerly breezes fluctuated from 12 to 20 knots and made control difficult at times so that even the skills of Evan Walker were not enough to stop his BW8 sliding out from beneath him and into a wild broach. In race 2 of the five-race final, Jerwood rounded the top mark for the first time with a narrow lead and set of on the downwind leg with a perfect spinnaker set. Behind him Walker was hit by a gust as the spinnaker filled, rolling it into a savage broach which took several seconds to correct. By that time, Jerwood was away with an unassailable lead.

Walker turned up to play in the race three pre-start, inflicting a penalty on Jerwood and winning the start. By the time the pair reached the top mark, Jerwood had closed the gap to zero and carried Walker past the mark, using the South of Perth Yacht Club jetty to prevent him from turning back. It was a classic escape manoeuvre which not only cleared Jerwood’s penalty but put him into the lead.

A reflective Walker acknowledged his opponent’s win and suggested with a smile “I think we need more practice!” That might be the case, but the two skippers in the final treated spectators to an excellent display of close racing where the result was in doubt to the very end, and minor mistakes turned into game changers.

In the three race petit final Sam Gilmour defeated Peter Nicholas two races to one, but the deciding race was clinched in the last few metres with some typically aggressive downwind tactics by Gilmour. Having been let down by losses in the last two races of the round robin and losing his semi- final to Jerwood 2-0, it was pleasing to see his performance against Nicholas. 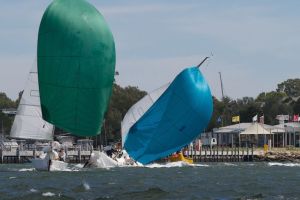 Jerwood sails on in full control.

Another Perth photographer, Rick Steuart of Perth Sailing Photography, captured stills and video of the same incident. Watch it on YouTube and see the still here: