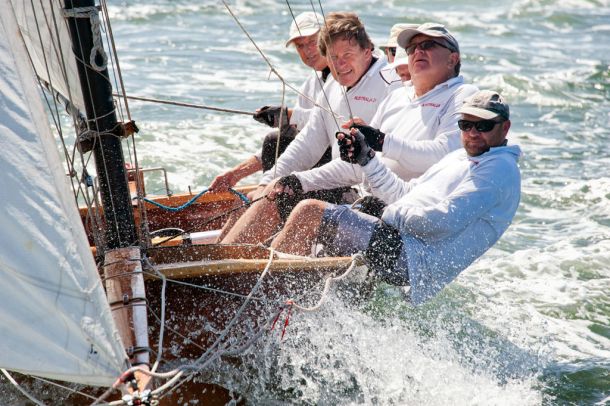 While match racing Aberdare (John Winning) for the second day running, Harold Cudmore’s chances for the Historical 18s Australian Championship title were dashed when Yendys capsized off Nielsen Park on the run to Shark Island this afternoon.

The highly fancied Yendys, with Cudmore, one of Ireland’s finest at the helm, had been leading Aberdare in a big 20 knot plus nor’ easter. The two crossed tacks going to windward up the Harbour, Cudmore favouring the western shore, while Winning played the breeze to the east and middle of the Harbour.

When the pair met, Yendys had the advantage, leading Aberdare until just before the YA mark at Watsons Bay, when Winning overtook, his crew quickly hoisting the spinnaker, leaving Cudmore to play catch up.

All was well until Nielsen Park when Yendys tiller broke off and over she went in the gusty winds that produced white caps and swell on the Harbour. Ironically, it was Winning’s Rippleside that took on rescue duties.

Yendys crew member and Sydney Flying Squadron Vice Commodore Michael Van Stom jumped aboard Rippleside and oversaw the rescue, which involved attaching a tow line to Yendys which was almost underwater and taking her under tow to a sheltered beach at Vaucluse.

“The tiller just snapped off and we capsized,” Van Stom said. “That’s the end of our chances, such a shame. But you can’t get angry, these things happen.”

It left the way open for Winning to take a second bullet after opening up a big lead on the rest of the fleet. It has also paved the way for the defending champion to redeem the title.

However, the David Swales skippered Top Weight was the first casualty of the day, retiring 10 minutes after the start. The original Top Weight and her replica were built more for Queensland’s flat water conditions and that was not what was on offer today.

The second retirement was Australia IV, skippered by Terry McDell from New Zealand. Another of the highly fancied boats for the title, the boat took on too much water off Shark Island and retired.

“We weren’t paying attention. We were busy looking at some good looking women on the Island and the boat just became awash with water,” the jovial McDell said.

“We sailed together all those years and now we’re sailing against each other,” Buckley said, laughing before heading out to the race course today. “May the best one win,” he said.

The final race of the Sydney Flying Squadron hosted Historical 18s Australian Championship will be sailed tomorrow starting at 2.30pm.