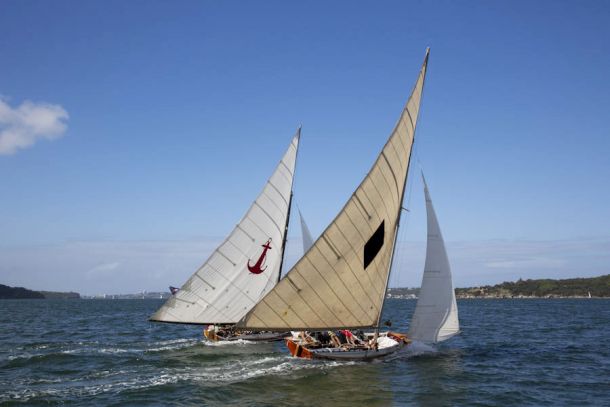 In a replay of last year’s final race, defending Historical 18ft Skiffs Australian champion John Winning steered Aberdare to victory on the first day of the 2015 Championship, after engaging in a race-long battle with Irish yachting identity Harold Cudmore at the helm of Yendys.

Sailing on the easterly course in a light east-nor’ easterly breeze, Race 1 started at 4pm on a perfect summer day. The 11 boats got off the start at Kirribilli fairly evenly, but It was not long before Yendys was leading Aberdare to Shark Island before the latter sailed inside Yendys and overtook her early on the run back to Kirribilli. Behind them, eight others had also paired off, sailing almost side by side for the first lap of the race.

Australia IV (Terry and Kim McDell, NZL) and Myra Too with former 18 foot skiff champion Phil ‘Cub’ Barnett at the helm, Scot (James Watt) and Alruth (Robin Tickner), Top Weight (David Swales) and the oldest boat in the fleet, Tangalooma (Peter Legrove), along with The Mistake (Jeremy Sharp) and Australia (Pakhtan Shah, USA). Behind them was the Ian Smith helmed Britannia.

Most of the pairs only changed places on the last work to Shark Island and the quick run to the finish at Kirribilli. However, Aberdare was never headed, Winning in control to the finish.

Winning, who attributed their win to carrying their No. 1 rig while the rest had chosen their No. 2 in anticipation of more breeze, commented back at the Sydney Flying Squadron, “We spent most of the race looking for breeze. The first leg was quite light, but it picked up to 10, maybe 12 knots later in the race. We just got there in the end. It was a beautiful day for a sail, but not a lot of work in it,” he said.

Winning was impressed by some of his competition. “Some of these guys haven’t sailed the Historicals before, or only a couple of times, like the McDells and Phil Barnett and they did a good job.”

Barnett, who with Myra Too crew, Adam South and their former skipper, Trevor Barnabas won the  prestigious J.J. Giltinan 18ft Skiff Championship in 1987 and 1988, is sailing the replica of the original 18 footer sailed by his father’s (Don) cousin Bill Barnett. Both were J.J. Giltinan winners, Don in 1967 and Bill in 1951, when he also won the NSW and Interstate Championships.

This afternoon, in true Barnett style, the Myra Too crew pipped the McDell brothers for third place in the last minutes of the race.

Terry and Kim McDell won the J.J. Giltinan in 1974 and returned to Australia on Tuesday with their winning mainsheet hand, Peter Brook. They have added fellow Kiwi and Farr Vice President Russell Bowler, a former champion 12ft and 18ft skiff champion to the mix adding to the high calibre of sailors contesting the Championship.

“Russell was always the guy I wanted to beat, so no way will I let him near the helm, he was my rival for too long,” Terry McDell said laughing this afternoon.

On Barnett beating them just short of the finish line, McDell quipped: “Did you see that small patch of breeze they got? I really enjoyed today, but I would have enjoyed it even more if we’d got third place.”

On whether they can beat Aberdare or Yendys over the next two days: “I’ve never set a ringtail and we’ll have to do that to be in with a chance, so that will be interesting,” McDell mused.

The Championship will continue tomorrow with a race to start at 4pm. The final race will be held on Saturday at 2.30pm.