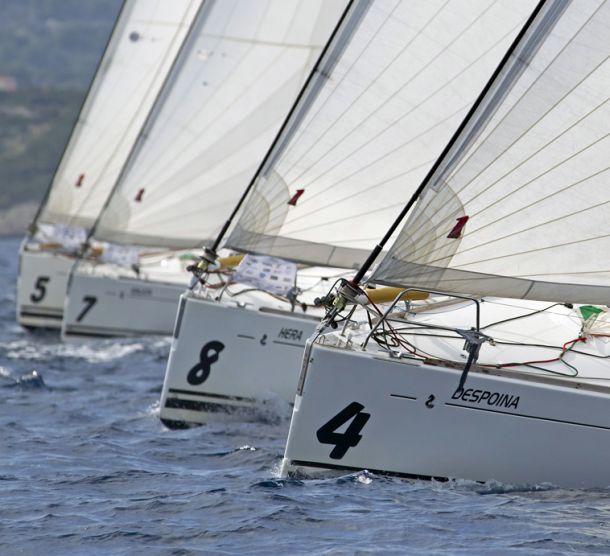 Positioned between a grand prix overseas regatta and a cruising rally is a brand new limited entry one design event due to start from the town of Split in Croatia on June 13, 2015. In between Australian offshore seasons and with winter in full swing it is the time of year when some of the country’s better known sailing names are heading out of town with their crews to compete in the inaugural Croatia First Regatta on identical Beneteau First 45 yachts.

Long-time 18ft skiff and one design sailor in multiple classes, Michael Coxon, is skippering one of only six Beneteau First 45s available. The name Coxon is synonymous with sailing. Not to be confused with his uncle of the same name, the younger Michael’s achievements include three-time 18ft skiff Australian champion, two-time world champion 06-07 and five-time runner-up. His one design pedigree extends to winning a Melges 32 world championship in 2009 and he’s campaigned Etchells, 420s and 49ers.

Coxon and his employer Beneteau Vicsail have extended an invite to their clients to form a team for Croatia.

The boats in the chartered fleet are all the same and the tri-radial cut spectra sails came out of the UK sail loft at the same time. There will be no extras other than what is in the standard inventory and yachts will be drawn from the hat before the regatta, creating a true level playing field.

“Teams arrive and are given near identical boats,” Coxon says. “You can’t bring your own equipment so the onus is entirely on the crew’s performance, and everyone has the same chance. There will be close racing through the day and partying the Croatian way at night.”

The wind gurus forecast sea breezes from 5-18 knots at that time of year, “That’s what the brochure tells me,” says Coxon of his impending first trip to the historically rich Mediterranean country, adding, “I’ve been told it’s beautiful cruising area…a must see.”

So how does someone used to competing at the highest level of the sport shift gears to a more relaxed style of racing with a crew that is likely to be made up of multiple boat owners coming together for the first time?

“Essentially the team will be thrown together on the day but we’ll still want to do well and will be trying to win on the water. We’ll definitely be hustling the likes of [Jamie] Wilmot and [Adam] Brown. It will be a race to the bar each day as we move from port to port,” Coxon predicts.

“Vicsail is keen to be involved and we are trying to put forward a team of whoever wants to come. This means it will be a bit like Rafferty’s Rules; I’ll skipper and we’ll rotate crew positions.  We definitely want to be first, but we’ll need to balance and manage the expectations of those in the team. Everyone is there to have a good time.”

Insurance company Pantaenius is building a crew from its Sydney office around well-known yachtsman Adam Brown. The Sorrento Couta Boat Sailing Club, home of the recent 2015 Moth Worlds, is sending club member Bruce Griffiths who says of his entry and eclectic group of friends joining him, “We are keen to participate in the regatta with quite a number returning to the sailing waters of Croatia after some wonderful prior experiences.”

Past Cruising Yacht Club of Australia Commodore David Fuller has put his name against another Beneteau 45, leaving three more available for charter.

Organiser Trevor Joyce from Mariner Boating says another unique dimension of the Croatia First regatta is the mother ship concept and travelling race management team.  “Unlike regattas where crews go out and return to the same place each day, we are mixing up passage and round-the-cans racing and returning to a different location with separate accommodation on shore after each distance race.”

Day passage races will take crews from the town of Split to the islands of Vis, Hvar and Korcula with short course racing planned for alternate days.

The Croatian Sailing Federation is responsible for the week-long on water program, due to be completed on Saturday June 20. Scoring will be an accumulative low point score system with all races counting. The yachts will then be returned to Split or the charter may be extended for cruising.

View the itinerary here. The Notice of Race is posted on the website.