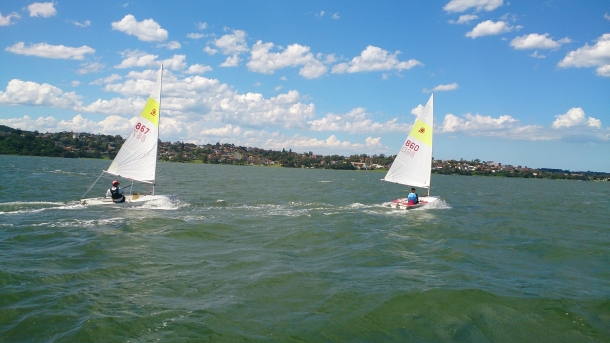 Forty one boats, good breezes, excellent courses, great facilities at Illawarra Yacht Club, and renowned Spiral camaraderie made for a great Spiral Nationals over the three days of the Australia Day weekend.  Over the whole seven races competition was intense throughout the field as sailors hotly contested divisions within the overall rankings.

An almost full range of weather conditions were on offer over the weekend with twenty plus knots of nor-easter  for the first two races and a similar strength westerly in races five and six.  Races three, four and seven were in lighter to moderate strength breeze.  The stronger winds left some wishing they had chosen the new 5.6 rig option division for the regatta, particularly as contestants in that division were not disgraced when the wind was light.

Visitor to the class, Rob  Douglass, just back from second in the Tasar Worlds,  won the regatta and the coveted Alan Warwick Trophy, sponsored by the boat’s N.Z. designer.  Rob’s daughter, and Tasar crew, Nicole came fifth and won the ladies division from Maria Nash.

The Spiral is 3.8metres long and is a lightweight, easy to rig, single-handed dinghy which has been sailed in Australia for over 30 years. It is exciting to sail in a broad range of conditions and is popular with teenage sailors, women and men of all ages. Large fleets race regularly in 10 sailing clubs in the ACT and NSW as well as the many owners who sail them purely for recreation.