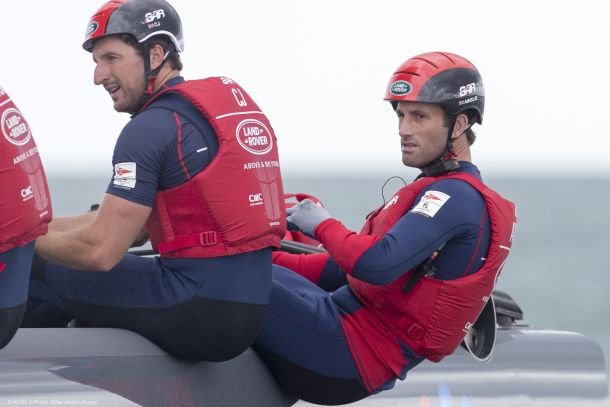 Ben Ainslie, the hometown hero at the Louis Vuitton America’s Cup World Series in Portsmouth, is finding his rivals are keen on naming him the favourite ahead of this weekend’s racing.

“I think Ben is clearly faster than everyone,” ORACLE TEAM USA skipper Jimmy Spithill said, to the applause of a home crowd eager to support the local team. “Honestly, I think he does have a bit of an edge. But every day I think the rest of us have been getting faster. And I think you’ll see that in the racing that is coming up.”

Spithill wasn’t alone in pushing Ainslie forward, although each skipper felt the new foiling versions of the AC45 catamarans would prove to be a leveller.

“Each team has only had their boat for about two weeks,” said Nathan Outteridge of Artemis Racing. “It’s been tough to learn how to sail these foiling boats – the foiling aspect changes how we race. I think it’s going to be close. If you’ve been watching closely there was never the same boat in front… but Ben was in front more than the rest of us.”

Dean Barker is one of the skippers who will be racing with a new crew in Portsmouth as his SoftBank Team Japan is coming to grips with the foiling 45s and learning to sail together – not an easy task as he says mistakes will be punished in this fleet.

“The race course is going to be quite challenging so there’s going to be plenty of opportunities. We've seen that it doesn’t take much to go from the front to the back,” he noted.

Skipper Franck Cammas, from Groupama Team France, agreed. “We’ve had more boats in front of us than behind us, so we have to change that. But it’s a one-design class so everybody can be fast at one time or another.”

Emirates Team New Zealand skipper Glenn Ashby traded gentle barbs with Spithill before talking about what it would take to win this weekend – and his focus is on crew work.

“Get off the starting line well and get around mark one in good shape… (And then you have to) take care of the boat-handling to have an opportunity to win races.”

For all the pressure being put upon him, Ben Ainslie of Land Rover BAR was quick to deflect the attention, noting that every team on the stage was more than capable of winning races.

“All of the teams are going really well. ORACLE TEAM USA and Artemis Racing are the two teams that have progressed from the last Cup with similar personnel, and that shows,” he said. “The rest of us are all new groups trying to come together, but with very talented squads, and I think the racing will be very close.”