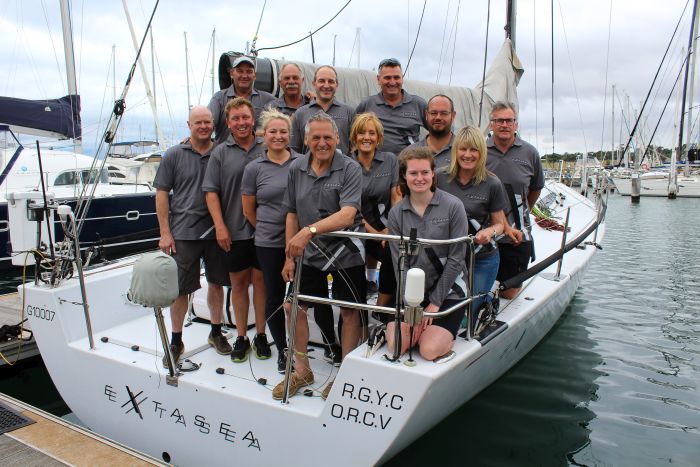 The owner and skipper of racing yacht Extasea will lead a predominantly local crew into the historic Rolex Sydney Hobart Yacht Race, which starts on Boxing Day. Twelve of the crew are from Geelong with a Melbourne sailor and a Queenslander also in the mix.

The Barwon Heads sailor and his crew will fly the flag for our city along with another RGYC yacht, Moody Buoys, in this year’s Rolex Sydney Hobart Yacht Race.

Buchholz first competed in the Rolex Sydney Hobart Yacht Race in 1976. He and current crew member Jamie Bennett also sailed together in the 50th anniversary of the race in 1994 on the original Extasea boat. Buchholz has competed in the race a further seven times and has also raced in the Melbourne to Hobart 16 times, with seven wins.

This is Buchholz’s fifth boat named Extasea, with the new Extasea arriving into Geelong on December 1 after being sailed from Hong Kong.

Buchholz and his crew spent the last two weeks doing last minute preparations to the competitive racing boat, including a full maintenance program, keel adjustments and sign writing, before it left on Tuesday for Sydney.

Built in New Zealand in 2004, Extasea – the Cookson 50 with a canting keel – then came to Australia and was renamed “Pretty Fly III,” before it was sold in 2016 to a Chinese buyer and renamed “UBox”. Buchholz then bought the boat this year after a three year search for this type of boat.

“We have only had it here for two weeks so we are just learning the boat. It’s a steep learning curve so it will be a nice gentle sail down to Hobart. We are not going to go flat out, we are just going to learn the boat and see how we go with it,” Buchholz said.

“In the 50th anniversary (of the Rolex Sydney Hobart Yacht Race) there were 312 boats.  It was an unbelievable and colourful start with a spinnaker set as they charged down the harbour,” he remembers.

“This one, with 170 boats will be a bit different, especially with the smoke haze still around Sydney Harbour. It will still be a huge send off when we leave Sydney Harbour.”

Buchholz said the conditions from Sydney to Hobart are challenging but it was a case of knowing the boat and sailing cautiously, rather than going all out.

Buchholz has sailed at the Festival of Sails every year since 1988 and is looking forward to the 2020 regatta on his new boat. The crew preparing for the Rolex Sydney Hobart Yacht Race and then the MacGlide Festival of Sails, all sail together regularly.

The Extasea skipper and owner first sailed at the Festival on his boat Night Moves, before he bought the first Extasea boat in 1993.

“The boat was a Northshore NSX…hence the ‘X’ to sea, where the name was coined. I’ve kept the name all the way through,” he said.

“In the last couple of years we have been in Cruising with Spinnakers. It’s really relaxed and fun and you get to enjoy the facilities. It’s like the party weekend of years gone by.”

“Everyone gets to enjoy themselves after a busy Christmas period and enjoy the whole atmosphere of the yacht club. We are out to enjoy ourselves but compete the best we can.”

RGYC Commodore, John Kint, wished the crews on-board Extasea and Moody Buoys the best of luck, and a safe journey to Hobart.

“We look forward to welcoming back Extasea and Moody Buoys, along with a number of other Sydney to Hobart entries, to Geelong for the MacGlide Festival of Sails.”