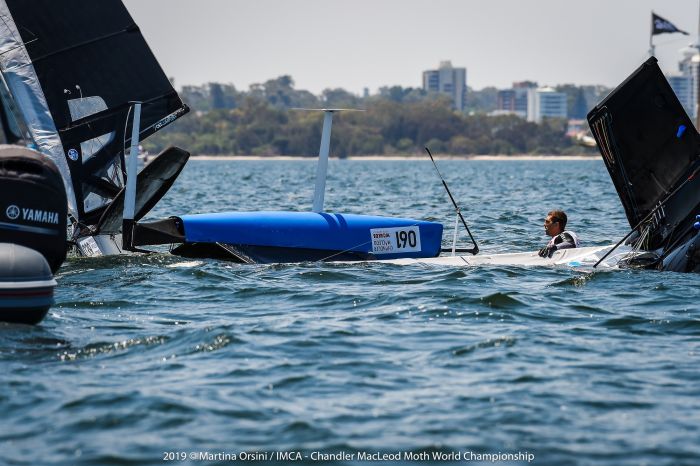 Challenging conditions on the final day of the Moth Worlds in Perth. Photo Martina Orsini.

With much more interesting breeze conditions, the final day of the 2019 Chandler Macleod Moth Worlds saw a real shake up on the course.

The battle for second place was on between Kyle Langford and Tom Burton after Tom Slingsby took out the overall championship after yesterday with two races to spare. He decided not to race the final day and joined the commentary team instead.

In the first race, Langford was slow off the start line and struggled in the lighter winds after deciding to sail with a bigger foil.

After the first upwind leg he was caught in no wind and was unable to get the boat foiling, leaving himself out the back and giving Burton the opportunity to strike.

But both sailors ended up dropping the race with Burton finishing in 14th, leaving the battle to be decided in the final race where Burton needed to win with Langford in sixth or worse to claim the runner up honours. Ultimately, Langford was second and Burton third, leaving the Aussies with a clean sweep in the series.

The day proved to be a better one for the Europeans with lighter conditions helping Italian Francesco Bruni to a 1-2 and moving into fifth position overall.

Full results can be found at http://bit.ly/MothWorldsResults