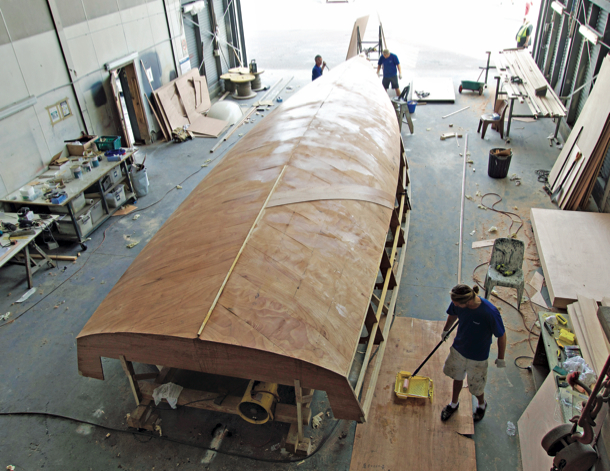 FATHER and son synergy sat on both sides of the deal when Bruce and Michael Ritchie commissioned Noakes Boatyard in Sydney to build their “fast gentleman’s day sailer”.

Bruce, who is 84, looks back to early successes as a helmsman in the Diamond, Etchells and 5.5 keelboat classes.

He was a pioneer of the one-design Etchells class in Australia, Australian champion in 1975, 1976 and crewed by Len Esdaile and John Stanley, third in the 1976 world championship at Newport, Rhode Island, USA. And in 1986 he won the Scandinavian Gold Cup international series for the 5.5 metre class on Royal Prince Alfred YC’s Palm Beach course.

Bruce was also an innovative yacht designer, of fast keelboat cruiser/racers around 30ft overall length during the 1980s and 1990s.

In more recent years, Bruce and Michael shared ownership of a Bavaria Match 42 called Union. After damaging the keel in a grounding, they commissioned a new fin and bulb keel from naval architect Andy Dovell which, coupled with significant reinforcement of the keel floors, made Union very competitive.

“Because of that it became a super fast boat for what it was. We sailed it for ten years and did well,” said Michael.

Then they began looking for a boat that would suit both their needs. Michael wanted one that he could sail singlehanded or with his wife and young sons and suggested to his father that they buy a much smaller day sailer that Bruce could race with his mates, something “very gentlemanly.”

Michael said: “And he went off with this kick in his step and came up the next day with the lines of the Ritchie 38 day-sailer, which was nothing near what I had envisaged,” said Michael.

“I was thinking of something you can sit in; something very tame. Anyway he came back with a lightweight flier that also has the capability of being sailed short-handed.”

Bruce said: “Looking around the world of day sailers nothing grabbed us. “We thought we wanted something with a little more oomph to it.” he said.

“From the outset it was going to be plywood; a hard-chine flat-bottomed downwind boat. “I wanted the satisfaction of being able to go fast downwind before I get too old and cark it.”

Michael was looking to do single-handed and short-handed sailing with his wife Melanie and sons Ollie (18), Ben (15) and Milo (12) on Pittwater, so they equipped the boat with labour-saving devices including a self-tacking jib system that fully spans the foredeck for ultimate control of jib leech shape.

The jib can be reefed and they put a boom on it so that it can be readily pulled into goosewing mode, with a line to the end of the bowsprit, for non-spinnaker social racing.

Michael said: “I fell in love with it straight away because, as I have discovered, I can sail this boat single-handed because it’s self-tacking, everything furls up. All the cars are on bearings so I can just drop everything after twilight sailing and it take only a few minutes to put it away.

“So everything about it on the brief that he reinterpreted has worked and it also goes real fast. He defied my brief and came up with something a lot better.”

The next challenge was to find a boatbuilder able and willing to construct a one-off hull in carbon-fibre covered plywood layer skins. They approached Sean Langman of Noakes Boatyard at Berrys Bay on Sydney Harbour, who was a friend.

Langman, keen to develop the timber boat-building and maintenance side of the business, which was Noakes Rigging when it first moved to Berrys Bay 22 years ago, also saw it as project for his son Peter who had just completed his apprenticeship as a shipwright.

“I said to Bruce, ‘I think it’s only right that shipwrights, when they come out of their time, should build a boat,’ so we struck a deal where this would be built under supervision by Peter and the rest of the shipwright team,” Langman said.

Will Hardcastle, the consultant naval architect from Peter Lowe Design, faired Ritchie’s hand-drawn lines, digitised them and sent them to a kitchen cabinet maker in Brookvale who used his CNC cutter to make the building frames.

The frames were then supplied to Noakes, which formed them into a male mould. Triple diagonal strips of 3mm Gaboon plywood, saturated in epoxy, were stapled on over the bottom and single straight-skin plywood over the topsides and deck.

The bottom was covered in four layers of carbon fibre and the topsides in three, all vacuum bagged and post cured.

Unlike production boat runs, where the male mould is removed and foam/carbon installed inside the hull, the mould framing remained as part of the structure. “We saved a huge amount of money and it was an extremely light structure; the same weight as building a full honeycomb and fibre vacuum-bagged boat,” said Bruce.

“She ended up weighing 3280kg and that’s complete weight, fully rigged with spars, rigging and sails on board. Most of the manufacturers quote ‘lightship’ weight because it sounds better.”

Bruce Ritchie praised the Noakes team: “I have always liked Sean Langman and all of his guys are dedicated to sailing; it was very pleasant negotiating with him, building with him, good fun and to a pre-determined price calculation.”

Michael Ritchie said: “Without Sean we wouldn’t have done it. There’s no way that boat would have happened, because he believed in it. I think we spent too much on it; Sean probably did as well, but he matched the passion.”

Revolver is the first boat in Australia to have installed the Oceanvolt electrically-driven sail-drive motor system. The 10kW motor and sail-drive weigh 46.5kg and with eight lithium-ion batteries included the entire system weighs 160kg.

The batteries can be charged via a mat of 400 watt solar panels which roll out on the cockpit floor when the boat is docked or on a mooring. “The whole thing re-generates, we’ve hardly ever plugged it in,” said Michael.

Timo Jaakkola, the CEO of Finnish-based Oeanvolt Ltd, checked and test-drove Revolver’s installation on a visit to Australia to do the rounds of the boatbuilders.

“The Oceanvolt installation works brilliantly. Michael and I are delighted with the performance in every way,” Bruce said.

“Although the unit is double the cost of a conventional diesel the benefits are no fuel, no sea cocks as it is water cooled via the sail-drive, no maintenance apart from an oil change once a year. And it’s quick; terrific acceleration, instant torque and quiet.”

Revolver is a true day-sailer with little encouragement to go below. There is a vee-berth forward with a toilet tucked underneath, wooden slat side seats slotted into the framing. There is no galley. A portable barbecue can be put on board for guest entertaining.

The boat was launched from the Noakes yard in October, christened Revolver, by Bruce’s wife Jan, after the name of Michael’s advertising film production business.

She has now found a permanent home on Royal Prince Alfred YC’s marina. Without the need to negotiate shallow water to reach Michael’s jetty pontoon on Scotland Island to plug into shore power for battery charging, the ability to lift the rudder and keel are no longer needed.

A balanced, fixed-blade shaft-hung rudder has been installed 1m in from the transom. “Hanging onto a two-metre long tiller with an unbalanced rudder in over 14 knots of breeze on a reach was a bit of a handful for me, although the young guys could do it,” said Bruce.

“With the new inboard rudder and the tiller only a metre long means tacking it for me, an old fella, I can just walk across easily where with the two metre tiller it was a bit of a handful.”

Now that the boat is berthed conveniently on the RPAYC marina, Bruce intends racing Wednesdays and some Saturdays with a full crew and is looking forward to going fast.

“We’ve got a big asymmetric which we’ve only had up once. It was very delightful; it’s a planing boat, it handled beautifully and it’s quick.”

He said that in the Middle Harbour YC Wednesday racing, it was quicker than a Farr 40 around the course by three and a-half minutes in light airs.

With a crew of six to ten possible in the big cockpit Bruce wants to sail fast downwind, ideally with a good crew of about eight. “I want to be able to stand up in a big breeze and go like the clappers.

“Just two-sail reaching it does 14 to 15 knots with ease. We expect better than 20 knots in 20 knots of wind. It sails faster than the wind now reaching and running and is probably capable of 25 knots, properly sailed, properly crewed.

“We expected it to be very wet, like most of these boats are, where white water pours in over the bow and runs out the back but we haven’t had one wave on board. It’s turned out to be very dry.”

Michael Ritchie, who sailed the boat on Pittwater almost every day while on a month’s holiday over Christmas/New Year, said: “You can either cruise
on your own, take people out or do a race and everything is easy.

“I have never had something material that I have loved so much and it’s all come together thanks
to Bruce.

“But what’s weird about it, for an 83-year-old man he came up with the most contemporary thing ever. He doesn’t hold onto tradition, he keeps on rolling through it. I am more conservative than Dad in many things. It’s an interesting trait.

“He’s finding the usual ageing problems but getting over that too, with mind over matter; he refuses to lie down. My mother sometimes despairs about how much he is pushing himself, but honestly he will keep on sailing until the day he keels over; that’s what will happen but that’s the way he wants it.”