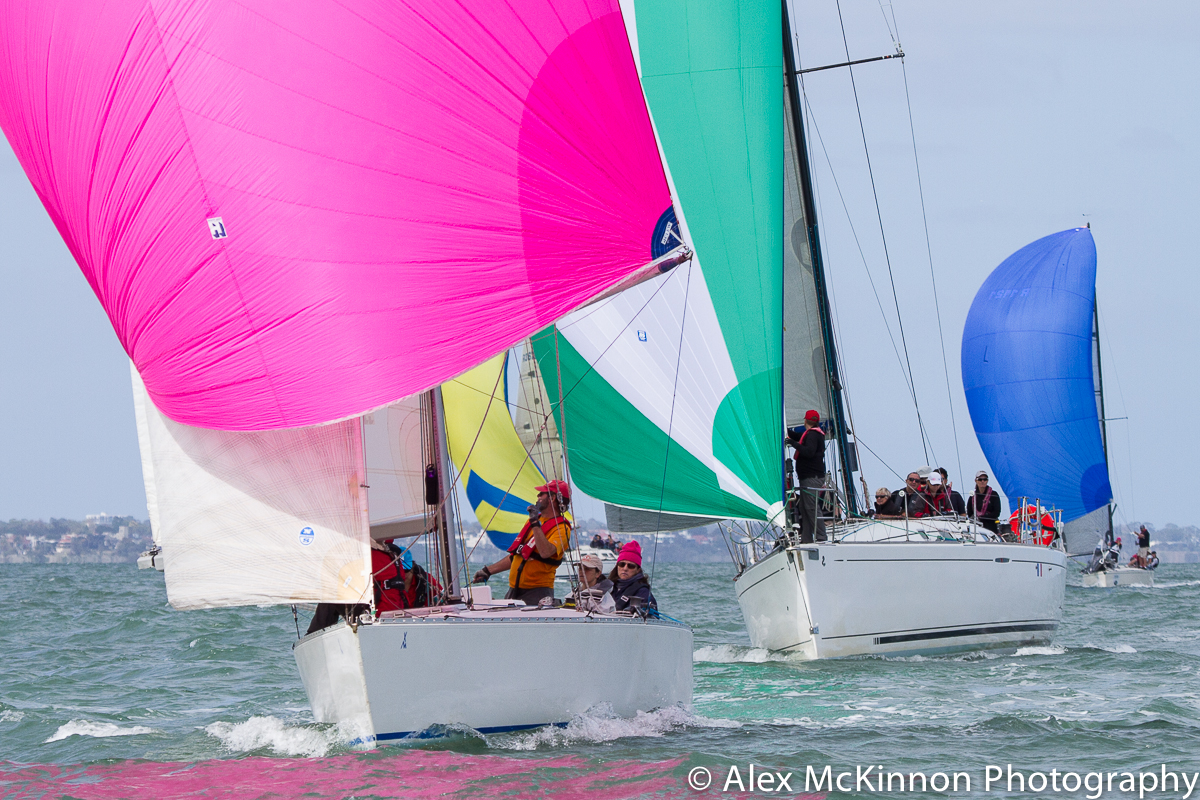 Hobsons Bay Yacht Club played host to Race 3 of the 2016 Port Phillip Women’s Championship Series (PPWCS) on April 3. This race saw a record number of entrants – not only for this season but for any race of any year since the beginning of the PPWCS series.

Conditions were perfect for the 33 boats competing with a solid 8 – 12 knots in relatively flat conditions allowing all entrants to practice what they had learnt in the past two heats. There were two division on the water with Division 1 battling it out for the Shirley Freeman Memorial Trophy and Hobsons locals vying for the Lady Skippers Race Trophy while Division 2 boats sailed the Bollywood Cup (formally the Señorita Cup). The two divisions both did separate courses but were each between 7 to 10 nautical miles long.

This race was named after Shirley Freeman OAM; Shirley was the first female boat owner and female senior club member of Hobsons Bay Yacht Club. She won a number of Victorian high profile races including the Melbourne to Devonport race and Petersville Regatta. Shirley gained her AM status on the 12th June 1989 in recognition of her public service. Along with her sailing influence she was a pharmacologist who advised on chemical weapon disarmament.

Divison 1 boats had a crowded start line that eventually separated the fleet into two sides; half the fleet went inshore and the others went further offshore. Despite the 50/50 split, racing stayed quite close with most of the fleet working hard on the downwind legs to reduce any gaps. An early drop for most boats meant a clean mark rounding and a strong position for the second upwind leg.  While some boats thought to 'bang the corners' on the second beat, benefits were seen by those who prioritised staying in phase.

Division 2 (Bollywood Cup) is the Non Spinnaker race aimed to encourage lady skippers to sail in a less competitive format so was great to see nine boats all enjoying this part of the series. One such lady was Toni Cascio, skipper of ‘Memphis Beat’ who, after three years of thinking about it, tried skippering for the first time.

“It’s taken me three years to get the courage to do this, but I thank my husband for talking me into it because I enjoyed it! This is a big achievement for me as I had to overcome my fear of being in charge of a boat for the entire race but by half way through my husband jokingly said ‘you’re not going to give me a go on the helm are you?’ to which I replied ‘no – that would be cheating!’

“I was nervous at the start but once we got going it was great. I'm grateful to have this women's racing as it gave me the chance to have a go in a relaxed and understanding environment. I look forward to doing some more racing at my home Club now.”

The aim of the Port Phillip Women's Championship Series is to get women racing on boats in a welcoming setting. Women who don't usually race are able to take leadership roles and try different positions that they may not normally get the chance. Hearing stories such as Toni's is a testament to this series. Congratulations to all participants!

YV Performance Handicapping (Names forever engraved on the trophy itself):

The next race day, the Jennifer Goldsmith Trophy, is happening on Sunday 17th  April. Host for this race is Royal Melbourne Yacht Squadron. For more information and to register visit the Women and Girls in Sailing website or their Facebook Page. For progressive results on the series click here.